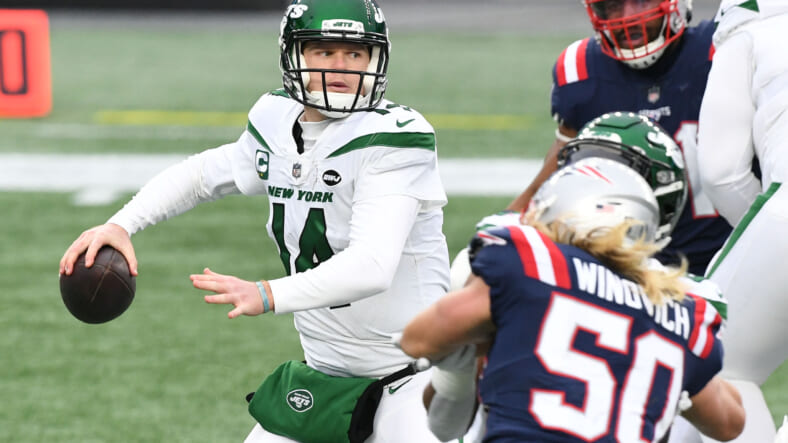 The New York Jets’ 2020 season ended on an appropriately sullen note, as they fell to the New England Patriots in a snowy slog.

If there was ever a perfect day to end the 2020 New York Jets’ season, it was an overcast, cold, snowy, sloppy day at Gillette Stadium…where the Jets were on the wrong side of the scoreboard.

Cam Newton put up 322 yards of total offense and threw for three scores in the New England Patriots’ victorious season finale, topping the Jets by a 28-14 final in a meaningless game in Foxboro. The Jets (2-14) were paced by 84 receiving yards on a trio of receptions by Breshad Perriman. In what could his final game as the Jets’ franchise quarterback, Sam Darnold threw for 266 yards, a touchdown, and two interceptions.

The Jets end this season with their lowest win total since 1996, when they won a single game under Rich Kotite. New York also endures their fifth consecutive sweep at the hands of the Patriots (7-9).

For the final time this season, ESM issues the game balls, as multiple eras come to their potential end in Florham Park and East Rutherford.

Last season, Perriman earned himself de factor WR1 duties with a strong finish to the regular season. It wasn’t as impressive this time around, but he provided the Jets a strong potential parting gift by serving as their deep ball threat in Foxboro. This comes after he was kept off the stat ledger in last week’s win over Cleveland.

It truly is a shame that, with all due respect to Frank Gore, that consequence-free football in Florham Park and East Rutherford wasn’t dedicated to exploring the Jets’ rushing future. During their brief time together, Adams and Ty Johnson formed a dynamic pair, and it was the former who wound up scoring the final touchdown of this wretched season. He and Johnson united for 92 yards in New England (4.2 average carry) after previously putting up a collaborative 178 in the infamous December loss to Las Vegas.

The case for keeping Sam Darnold often covers the ridiculous amount of turn over he has experienced in only three years at the New York helm. No receiver remains from his rookie campaign, with the exception of the tight end Herndon. Darnold’s former rookie camp roommate had struggled to replicate the success of his rookie season, hampered by injuries and other calamities. But Herndon managed to recapture a little bit of his 2018 spark toward the end of the season, capping things off with a game-best in receptions and a touchdown in each of his last two games.