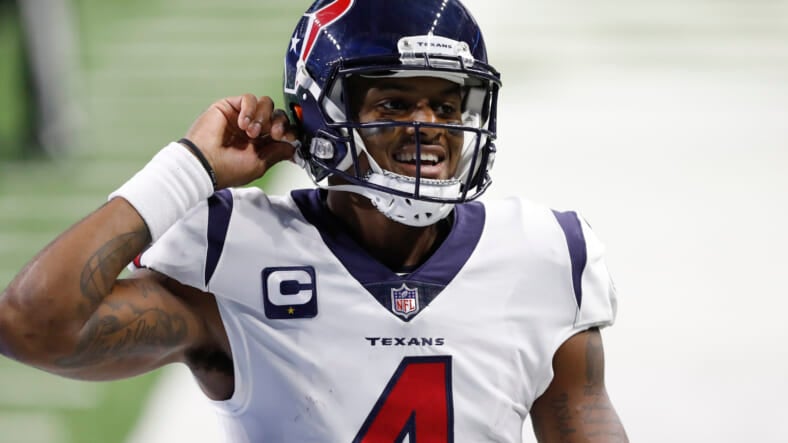 The idea of Deshaun Watson moving to the New York Jets sounds too good to be true. That’s because, frankly…it is.

Somehow, someway, the Houston Texans…a team blessed with the talents of one of the most recognizable names in football on each side of the ball, winners of four of the last six AFC South titles…managed to become a more toxic gridiron wasteland than the New York Jets.

To paraphrase the great Ron Burgundy, one can’t even be mad. It’s amazing.

The biggest story outside of the NFL playoff picture by far is the fate of Watson, the beleaguered franchise quarterback. No playoff games await Watson, but he is apparently nonetheless on a mission this postseason: to get out of Houston as fast as possible. It’s a liberation that has been brewing for some time and the rumbling has only intensified upon the end of the Texans’ 4-12 season. Adam Schefter of ESPN brought things to a fever pitch through a report that strongly indicated that Watson “has played his last snap for the team”.

Despite the lack of a formal trade request (and the prescience of the no-trade clause in his contract), Watson has been linked to several of his non-playoff brethren, including the Jets. The sleuths of Instagram took notice of one of Watson’s recent “likes”, one featuring potentially the first of many punny headlines from the New York Post. Richard Sherman, a noted fan of new Jets boss Robert Saleh, advised Watson to “head to New York” on Cris Collinsworth’s podcast. Video has surfaced of Watson purchasing a car his associates wanting it painted “jet green”.

don’t know if this is from today or years ago but this is deshaun watson buying a car in philly. the salesman says he wants deshaun to sign with philly. his agent says they want the car to turn “jet green”.

From a Jets standpoint, all the pieces appear to align in their favor. The light at the end of their two-win tunnel was the second overall pick in April’s draft, a pick the Texans desperately need after shipping their own first rounder (which became the pick right after New York’s) to Miami. That more than likely won’t be enough to satisfy the Texans (who likely won’t be appearing in Wid Card Saturday’s afternoon slot anytime soon), but the Jets have the picks to atone for it, including guaranteed first-rounders from Seattle via the Jamal Adams trade. Assets beyond picks could include contributors under contract that might become salary cap casualties anyway…talented names like Jamison Crowder and Henry Anderson that could potentially save the Jets a pick. Thier cap space is already pretty attractive as is; entering the 2021 offseason, the Jets have just over $65 million to spend, behind only Jacksonville ($73 million).

The Jets have been looking for a lasting franchise quarterback after since Joe Namath took his final green snaps in 1976. False prophets have come and gone, but a name like Watson, only starting to tap into his true potential and power, could give the Jets long-term assurance and stability at arguably the most important position in all of sports.

If all of this sounds too good to be true…especially when it comes to a franchise as star-crossed as the Jets…that’s because, frankly, it probably is. A union between Watson and the Jets wouldn’t be fair to either side, tantalizing as it may be.

For Watson, a New York collaboration wouldn’t be much different from his current situation in Houston…except it would be a lot colder. From a Jets’ standpoint, there would little separate a potential era of Watson from the Sam Darnold saga. The way the team is constructed now, there would be plenty of instances of Watson running for his life, and this would be after he led the league in passing yardage despite being brought down 49 times with the Texans (third-worst in football). Watson’s mobile talents would perhaps spare him some of the carnage, but likely nothing where he would be able to make a meaningful difference in the Jets’ offense, one that finished at or near the bottom of most major statistical categories.

To the Jets’ credit, namely general manager Joe Douglas’, they’re starting to making sensible, rational, if not conservative, decisions with their offensive roster. In his first draft last spring, Douglas bypassed the name-brand receiving talent to take tackle Mekhi Becton. Not only did Becton turn out to be one of the brightest emergences of the 2020 rookie class, but Douglas was also able to earn a big-play receiver in Denzel Mims in the second round. There’s also plenty of time between now and Week 1 of a hopefully normal 2021 season…heck, there’s plenty of time even before the draft…for Douglas, Saleh, and the Jets to stock up and become more attractive to a new franchise quarterback, whether it’s Watson, Trevor Lawrence, Justin Fields. There’s no guarantee they’ll even move on from Darnold, who has reportedly caught the eye of both Saleh and his reported new offensive coordinator Mike LaFleur.

Unfortunately for Douglas, however, his debut veteran acquisition class left much to be desired, riddled with names that were plagued by injuries (Bradley McDougald, Greg Van Roten), inconsistency (Connor McGovern, Pierre Desir), or both (Breshad Perriman). Adding Watson is the type of move a team makes when they’re the proverbial “one move away” from the Super Bowl. If the Adam Gase era proved anything, it’s that the Jets are many, many moves away from a mere playoff berth, much less the Big Game.

The Jets needed to use every asset, every piece of roster capital they have to end this cycle of rebuilding. Dedicating a majority of those resources, be it picks, be it cap space, to Watson and his contract (which includes a $40 million cap hit next year) would be reckless spending, using excess fund to plug one hole when there are many, many, many holes to be filled. Bringing Watson in would sell jerseys, but it wouldn’t necessarily lead to wins.

Modern NFL endeavors have provided countless examples of such irresponsible spending. The Jets’ MetLife Stadium co-tenants, for example, were on the verge of something at least entertaining at the end of the 2016-17 season. In the first year of their post-Tom Coughlin endeavors, the New York Giants won 11 games and showcased six All-Pro men on their roster. Their season ended in a listless 38-13 Wild Card playoff loss in Green Bay, but hope was on the horizon, manifested in several high-profile transactions. Big Blue welcomed in receiver Brandon Marshall to work alongside Odell Beckham Jr. They used their first-round pick on tight end Evan Engram, an Ole Miss alum to gear up fellow former Rebel Eli Manning for one last run to glory. Later in the draft, the Giants took Davis Webb in the third round, perhaps the most serious they had come to seeking an heir to the Manning throne. The team also re-upped with fan favorite pass rusher Jason Pierre-Paul to the tune of a four-year contract with $40 million guaranteed.

But in their marquee spending, the Giants failed to account for some of more dour problems hidden on their roster, namely the offensive line. The Giants did little, if anything, to upgrade their line, letting reliable veterans like Andrew Whitworth fall by the wayside. Cursed with little to no blocking help, the Giants sputtered to a brutal 3-13 season and fell down a hole they have yet to emerge from. Beckham has since been traded, and there is little left from the promising 2016 campaign.

The story of the modern Giants and so many other “offseason champions” in the NFL serve as cautionary tales to active Super Bowl seekers. A house renovation could serve as a strong parable to what the Jets are going through at this moment. Bringing in Watson would be a high-profile purchase, immediately spending a windfall on, say, a luxury vehicle or swimming pool. However, doing so would ignore more grimy, subtle problems in the house that could bring the entire structure down…mold damage in the basement, perhaps. Even if the Jets admit that Darnold isn’t the answer, there are still situations to resolve, such as their porous blocking, uncertain rungame situation, and lack of offensive weapons and defensive depth. Filling every blank with Watson isn’t going to work, no matter how hard the Jets try. The Texans have tried doing that with Watson and J.J. Watt…chaos has enused. 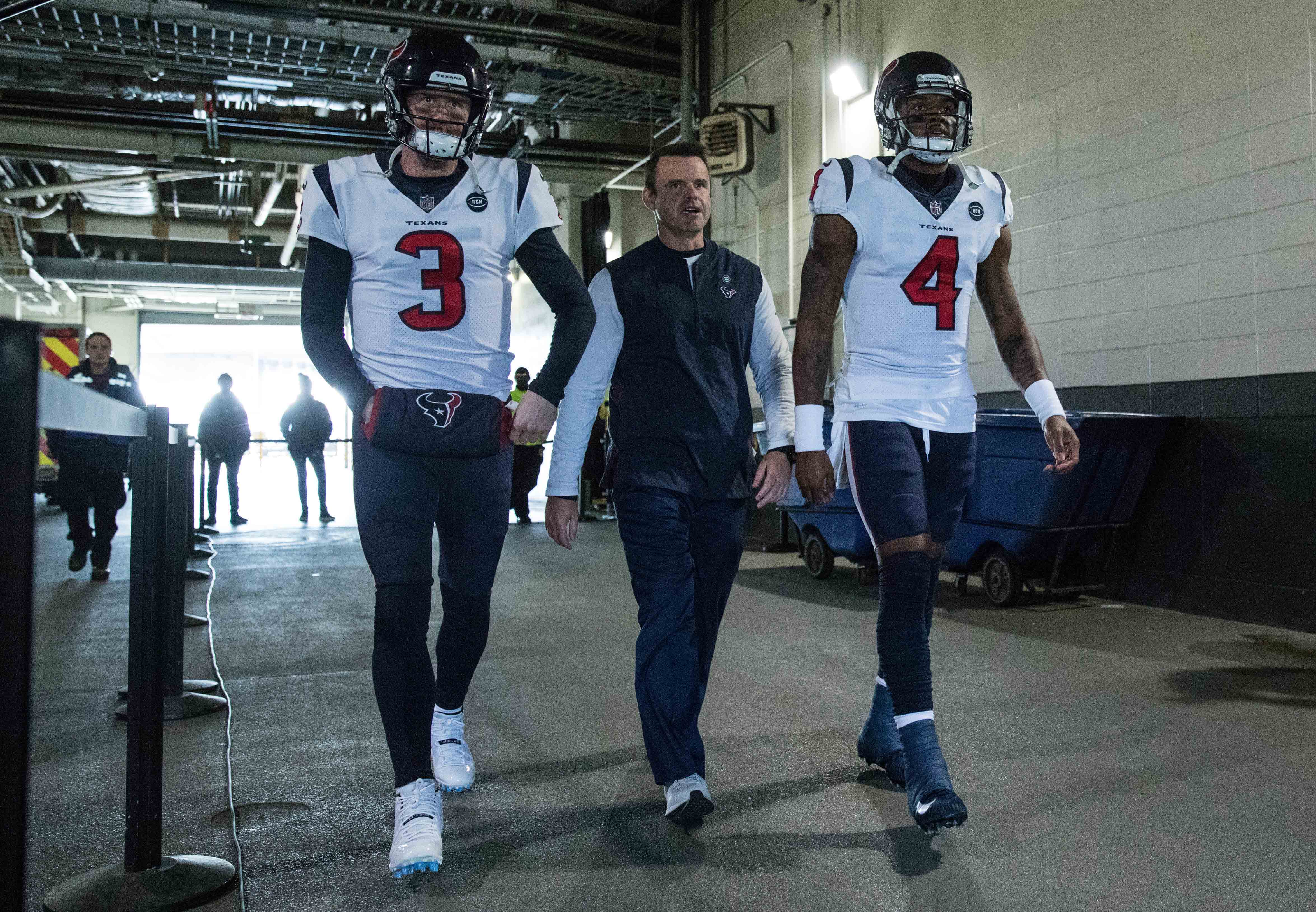 It seems hard for Jets fans to believe, but that’s the cruelly funny thing about life in the NFL: there’s no situation, no matter how dire, where things can’t actively get worse.Â The Jets have been blessed with a plethora of offseason capital through multiple draft picks and excess cap space. To cash it all in on one big-ticket player would be reckless.

Another reason why Watson’s potential New York arrival sounds so promising is because not only has he made an impact on the field, but he continues to be a vital prescience off of it as well. Watson has made it clear he wants to use his voice for good as Americans seek an end to systemic racism and he has also come through for Houston medical staffers fighting the ongoing health crisis. Bringing in a high-character superstar would be the perfect way to open a new Jets era, one that could allow them to shatter the losing status quo that New York football has become far-too-accustomed to. Watson’s rumored eagerness to join a two-win team bearing what’s by far the longest playoff drought in the NFL (10 seasons) speaks volumes as well, signifying a welcome counter to the concept of “ring-chasing” that has spread throughout the major professional sports leagues.

But to ask Watson to come to New York and become a lone, instant fixer-upper…which is essentially what he would be if the Jets bestow all of their offseason funding unto him…when he’s on the precipice of entering his prime is a little too much to ask for. A more established contender, a Miami, an Indianapolis, would be better for a player of his talents. If the Jets truly want to make a change at quarterback, they would be far better off using their cap space to create a more attractive environment for a rookie quarterback, or even build around Darnold if Saleh and LaFleur are impressed enough to keep him around.

This is a new, exciting time to take an interest in the New York Jets…it’s so rare to say that. While there’s a chance that Douglas could make the Watson revolution work, it’s best, for the time being, to avoid temptation. It’s never good to use an “all for one” mentality…the assets, an “all for all” situation, would be better spent on many helpers, never mind just one, showstopping as he may be.