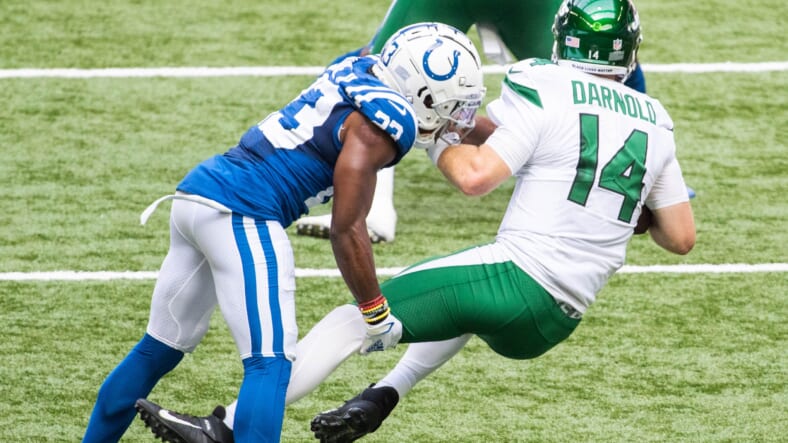 It’s hard to blame Darnold for it, but there’s no denying the New York Jets are no better off since their fateful 2018 trade with the Colts.

The NFL Draft has transformed from a single, fleeting weekend in April to a 12-month, 365-day affair that dominates the football landscape on both the professional and amateur levels. Part of the reason for this evolution is the lasting relationship the draft holds with the concept of “what might’ve been”. Fruitful and ineffectual Sundays in autumn have fans constantly asking questions in spring retrospect.

The New York Jets and Indianapolis Colts will be linked by this bond for the foreseeable future. Two years, five months, and eight days before their Sunday afternoon meet-up at Lucas Oil Stadium, a 36-7 Indianapolis shellacking, the two sides agreed to a trade that altered the selection board of the 2018 NFL Draft. New York (0-3) sent four picks to Circle City to move their first turn up three slots. Such a move allowed the Jets to be around for one of the top quarterback choices available in the 2018 proceedings.

The Jets and Colts also engaged in several draft day deals since then, but none have been more vital than the swap that indirectly dressed Sam Darnold in green.

“(New York)Â had an interest to move up to (No.) 3 and kind of went back and forth for the last four or five days,” Colts general manager Chris Ballard said at the time, per ESPN’s Rich Cimini. “(We) talked to a couple other teams, but we still wanted to stay in position in that top 10 where we could still get a premium player. We feel like at (No.) 6, we’ll still be able to get a premium player.”

At the time, the Jets were actually stocked on the foreign concepts of hope and momentum. They had gone 5-11 the year before but were energized by a young unit overseen by the reasonable reliability of placeholder quarterback Josh McCown. USA Today had the Jets winning a single game in 2017, but McCown and company conjured up five (including one over future AFC finalist Jacksonville), providing some rare positive vibes in green New York circles.

Trading four picks to move up three spots was risky no matter how it was sliced, but, in this NFL era ruled by offensive heroics and a fantasy football deity, a true franchise quarterback was vital. 2018 was the year to find that man, with Darnold, Baker Mayfield, Josh Allen, Josh Rosen, and Lamar Jackson all entering the professional ranks. Then-general manager Mike Maccagnan knew just how important being in prime position to welcome one of those names to New York was, telling ESPN Radio’s Humpty and Canty “If (there) was a player we felt strong about, we would have no qualms of potentially trying to go up and get him”. With the third selection in hand, he was guaranteed at least one.

After Mayfield and running back Saquon Barkley respectively went to the Browns and Giants, the Jets took Darnold with the third overall pick. Everyone involved knew typical green growing pains were ahead, but the Jets’ perpetual rebuild had perhaps his brightest glimmer of hope since the Tim Tebow circus tent deflated.

Meanwhile, Indianapolis quietly made its selections, preparing for a future that would presumably be led by their own prized franchise man. Andrew Luck had missed all of 2017 with a shoulder injury (leading to the Colts’ high draft slot), so Indy was abuzz on what would be done to protect him. Ballard acquiesced by draft Notre Dame guard Quinton Nelson with the sixth overall choice brought in from New York. The next day, another Jets selection (37th overall) was used to take another interior man, Auburn’s Braden Smith (one choice after the Colts used their original second-rounder to take future All-Pro linebacker Darius Leonard). The final Jets choice from 2018 was traded to Philadelphia, but the Colts used the last of the bounty to choose cornerback Rock Ya-Sin 34th overall in the following year’s selections (Ya-Sin missed Sunday’s game due to injury).

Nelson and Smith (who later moved to tackle) joined a veteran group headlined by Peyton Manning-era holdover Anthony Castonzo and veterans Ryan Kelly and Mark Glowinski. Upon Luck’s return, he was sacked only 18 times during the 2018 campaign, slicing his takedowns by more than half. The Colts immediately returned to the playoffs and earned an upset win over divisional rival Houston in the wild card round. Not only was Luck never sacked, but Colts rushers also tallied 200 yards, 148 coming from Marlon Mack.

“They’re blue-collar work guys,” former offensive line coach Dave DeGuglielmo said in a 2018 report from ESPN’s Mike Wells. “These are the guys that dig holes. They work with jackhammers every day. There’s no glory for these guys. If it weren’t for them, nothing else happens.”

“Every team in the league has physical talent, but the mental makeup of this group top to bottom is by far the best I’ve been around,â€ retiring guard Matt Slauson said in Wells’ story. “The way they’re able to take coaching and immediately apply it is huge. It allows for in-game adjustments to happen real fast.”

Luck’s abrupt retirement prior to the 2019 season somewhat derailed the Colts’ resurgence plans, but the team has remained competitive under placeholders Jacoby Brissett and Phillip Rivers. They’ve only allowed 35 sacks over the past two seasons, good for eighth in the NFL. An uncanny ability to stay healthy has likewise been impressive. Sunday’s tilt against the Jets marked the 19th consecutive game that the Colts rolled out the same unit in front of the quarterback, which might as well be an eternity by NFL standards. The unit has been overseen by former playoff hero and strong offensive mind Frank Reich, who has worked with coordinator Nick Sirianni since their days with the Chargers’ franchise (2013-17).

To say Darnold has been lacking that kind of stability would be the understatement of this infantile season.

The USC alum can certainly be held accountable for the alarming number of mistakes he has made in the fateful third season, like the three Sunday interceptions into crowded coverage that yielded 14 Colts points. But the fact Darnold has managed to showcase some flashes of brilliance despite an ever-changing roster. Whereas throwers from Indianapolis have enjoyed continuity in their protection and receiving, Darnold is working with an entirely new offensive line from last season and not a single catcher remains from his rookie season.

The transition and turnover has not been limited to on-field personnel. Darnold has had to go through two different coaching staffs, and a third could be on the way if the Jets opt to move on from head coach Adam Gase. While Reich oversaw an offense that consistently racked up yardage in San Diego and Los Angeles, the 2020 season has been full of evidence against Gase. Ryan Tannehill has emerged from quarterback purgatory to become one of the game’s more consistent passers. Jets management, namely CEO Christopher Johnson, has offered a vote of confidence to Gase, the “offensive genius”, but the Jets appear in the 30s in numerous stat categories in a 32-team league. Funds and picks to help Darnold have gone toward acquisitions that have been disappointing (Breshad Perriman, Ryan Griffin, Quinnen Williams), injured (C.J. Mosley, Denzel Mims), or both (Le’Veon Bell).

Sunday was more or less a culmination of the Jets’ woes against a team with whom they collaborated with in managing their future. The Colts (2-1) are a team that’s still figuring things out. Rivers is clearly not meant to be the quarterback for any lengthy period. Longtime prime receiver T.Y. Hilton has struggled to post the number expected of him. Tannehill and the undefeated Tennessee Titans have control of the AFC South. The horseshoe helmeted squad might be able to take advantage of the expanded wild card picture, but no one’s expecting them to rep the conference in Super Bowl LV.

Against the Jets, however, it might as well have been the Manning/Edgerrin James/Marvin Harrison days all over again.

The Jets earned only 15 first downs and 260 yards on offense, failing to reach 300 for the third consecutive week in an NFL where such a concept is commonplace. Even brief moments of joy, like a 7-7 tie in the first quarter via Darnold’s rollout strike to Braxton Berrios, was offset by calamities both unforced and beyond their control. In the case of the latter, a rare step in the right direction, Mekhi Becton, was lost to an injury that cost him the entire second half. His prescience was best on display when his replacement, Connor McDermott, missed the block on Justin Houston that led to a Colts safety in the fourth quarter, more or less solidifying the case that the Gase-era Jets are football’s version of Murphy’s Law. Gregg Williams’ defense could provide no silver linings. True to form, the Colts’ blockers allowed no sacks on Sunday.

More points by the @Colts defense.@JHouston50 sacks Darnold in the end zone for a safety! ?

This brutal display simply personified how little the Jets have moved forward since that fateful trade in 2018. The Colts were the perfect team to expose such flaws. If anything, the Jets have only taken several steps back.

â€œI just got to play consistent,â€ said Darnold of the loss, per Manish Mehta of the New York Daily News. â€œIâ€™m not playing consistent enough to play well in this league. Make the plays when theyâ€™re there. When theyâ€™re not, just get rid of the ball. Check it down. Do all the right things I need to do.â€

Thirteen harrowing weeks remain on the Jets’ ledger. The lone positive to glean from Indianapolis is that a short week ensures that no one will have to watch the game film for too long. New York returns to action on Thursday, as an American public desperate for football will endure a test in endurance through a Jets tilt against the equally woebegone Denver Broncos (8:20 p.m. ET, NFL Network). While the thought of the playoffs conjures up only Jim Mora-style tirades, much of the Jets’ personnel, including Darnold, could well be playing for their New York futures.

The Jets are next scheduled to face the Colts in 2021, also at Lucas Oil Stadium. It stands to reason that a majority of Indianapolis’ haul from the trade will still be playing when the matchup arrives. Thanks to both personal and team-wide issues, Darnold’s status could well be in doubt as well.