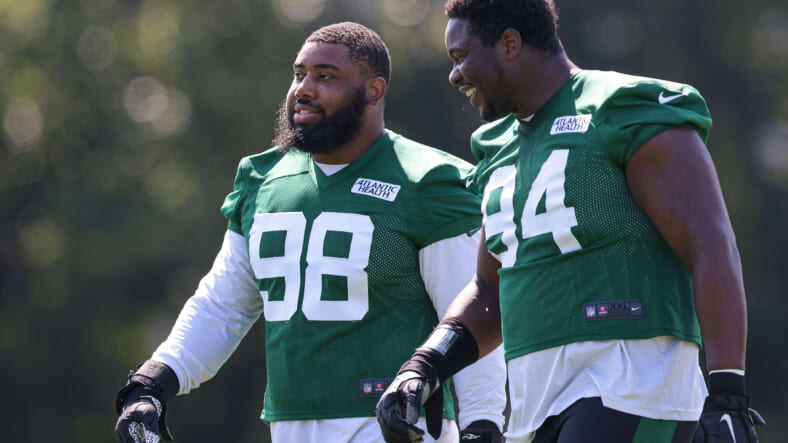 Rankins, a playoff staple in New Orleans, sees signs that the New York Jets’ pleasantly surprising defense can compete with the NFL’s finest.

Sheldon Rankins goes into the New York Jets’ London excursion as an avenger of sorts. The former New Orleans Saint could make his former comrades proud with a win on Sunday, as the Jets face the fleur de lis’ biggest rival, the Atlanta Falcons, in the NFL’s first international game since November 2019 (9:30 a.m. ET, NFL Network).

Tony Stark won’t be available. But Rankins is pleased to say that the Jets’ defense, namely the front seven, has enough “superpowers” to work their way through the trials of the road back to respectability.

“There’s a special thing about the group…everyone has their superpower,” Rankins said on theÂ Inside the JetsÂ show on the team’s official website. “We speak about (Quinnen Williams’) straight-line power to just move people out. Foley (Fatukasi) is a mountain of a man. (John Franklin-Myers) has the versatility to move as quickly as he does. Bryce (Huff) is the Tasmanian devil, that’s what we call him, and he probably got that name 30 minutes ago. Myself? I’m kind of the wily veteran in the room right now.”

The Jets’ defense has been one of the more pleasant surprises of the 2021 NFL season. Stitched together with additions obtained through the Saturday of draft weekend and decimated by injury, the unit has embraced the challenges inherited by a developing offense. Average defensive possessions start a mere 64 yards away from the end zone, the worst starting situation in the league.

Yet, much like Robert Saleh before them, the unit has been a showcase of adaptability and resiliency. Entering Week 5 action, the Jets have allowed 17 red zone possessions, the worst tally in the league if not for Kansas City and Washington (19 each). The sizable opportunities have been created through eight turnovers, a tally that ranks at the penultimate point of the league’s depths (only Jacksonville is worse at 9).

Fortunately for New York, only six of those possessions have ended in touchdowns, behind only a three-team group of Buffalo, Denver, and New Orleans. The resiliency was prominently on display in the Jets’ first win of the season, a 27-24 overtime triumph over the Tennessee Titans. In that win, the Jets saw the erasure of an early 9-0 lead build solely through Randy Bullock field goals.

The early stages of the 2021 season have also brought back the Jets’ pass rush abilities. Such a revival tour was masked by early losses, but Sunday’s effort was impossible to ignore. The Jets earned seven sacks, their best output in nearly four full seasons, en route to their first addition to the 2021 win column. They’ve earned 16 sacks this season, which once again ranks second, trailing only Sunday’s opponent in that category. These numbers have been posted despite the extended medical leaves of impactful newcomers Carl Lawson (out for the season) and Jarrad Davis (out for at least one contest going into the coming bye week).

In speaking with hosts Dan Graca and Bart Scott, Rankins acknowledged that the Jets’ newfound aggressiveness is a high-risk, high-reward gambit that can let up big plays. But Rankins knows the value of a disturbance in the backfield: New Orleans ranked in the top six of pressure rates in each of the last two seasons en route to 25 wins and the latter half of four consecutive NFC South titles.

Rankins, 27, has posted pedestrian numbers (four tackles and a sack) compared to his young compatriots. He believes, however, that continued collaborative pressure will help bolster everyone’s numbers. To that point, Franklin-Myers has already reached or neared his career-best tallies. His efforts have since been rewarded with a reported four-year extension with his rookie contract set to expire after this season.

Working in such a system has Rankins feeling like another superhero of both the pages and silver screen. Appropriately, this one calls Gotham City home.

Even if Rankins isn’t sending in showstopping stat sheets, head coach Robert Saleh knows just how important he is to the Jets’ defensive revolution. It was Saleh who convinced general manager Joe Douglas to inquire into the former Saint’s services, even as he was coming off a knee injury that relegated him to the injured reserve. Rankins hasn’t played a full NFL season since 2018, when he tallied 15 pressures, 12 tackles for a loss, and eight sacks in his third season in The Big Easy.

Even as Rankins continues to work his way back, Saleh is pleased to see his faith rewarded.

“You could already see, last year, that he was getting back to what he was when he was drafted and then his second year when he was so productive,” Saleh continued. “Then injuries obviously set him back, but when you talk to people around the league, especially in that building, he is an unbelievable leader, heâ€™s got tremendous work ethic, the way he takes care of his body, heâ€™s meticulous in everything he does, and Iâ€™m just really excited for him and the success heâ€™s been having so far.”

Rankins is one of the rare Jets with both extensive experience against the Falcons and on the football pitch: the interior threat has earned 16 tackles, eight pressures, and seven tackles for a loss over eight games against Atlanta and was in the Saints’ starting lineup during their October 2017 tilt against Miami at Wembley Stadium.