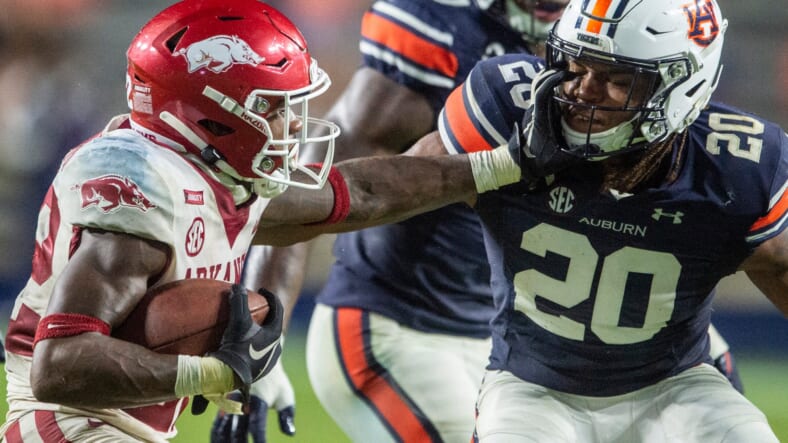 The early entrant Sherwood, a safety out of Auburn, became the New York Jets’ first Saturday selection at No. 146.

With the 146th pick in the 2021 NFL Draft, the New York Jets chose Auburn safety Jamien Sherwood. The pick was the Jets’ regularly scheduled fifth-round selection

Sherwood was an early entrant to the draft and partook in 34 games with the Tigers, earning 140 tackles (8.5 for a loss) and 10 pass breakups. He ranked ninth in the SEC in solo tackles (44) this past season.

Some have seen Sherwood as versatile, with some believing he could move to outside linebacker. He developed a strong reputation as a hard-hitter, with ESPN’s Mel Kiper Jr. calling one of the “best tacklers” in the draft after the Jets made the selection. Sherwood’s speed and hard-hitting should also allow him to contribute on special teams.

“He can intimidate receivers working into the middle of the field and has the size to cover tight ends,” NFL.com’s Lance Zierlein wrote about Sherwood, comparing him to Clayton Geathers and Nate Gerry. “He must play down safety or in a robber role as his speed and athletic ability will get him into too many binds and get him beat in the pros. It wouldn’t be shocking to see a team eventually look to move him from safety to linebacker, where his athletic ability would go from hindrance to help.”

The safety is the Jets’ first defensive selection of the 2021 draft, the longest they’ve waited before taking a defender since 1969 (DE Jimmie Jones, 156th). He’ll join a young secondary working its way back from the post-Jamal Adams era, one set to be headlined by franchise-tagged veteran Marcus Maye. Other safeties on the current roster include free agent newcomer Lamarcus Joyner and returning Saquan Hampton.

New York’s next selection to set to be the 154th overall, obtained from the New York Giants in exchange for Leonard Williams.