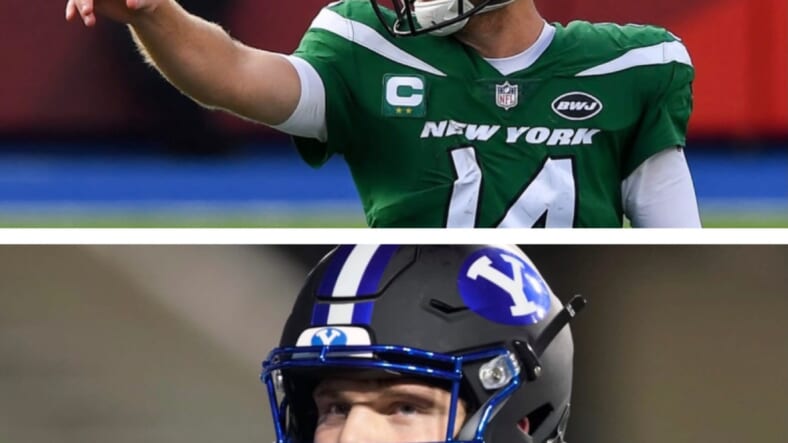 If the New York Jets quarterback quandary is truly down to Sam Darnold and Zach Wilson, there must be no stalemate.

There’s no telling exactly when the New York Jets started thinking of having someone other than Sam Darnold in their franchise quarterback role. The only facts behind the case are that the situation is active and will be resolved by the evening of April 29, when the team chooses second in the 2021 NFL Draft in Cleveland.

But what if the situation stretches beyond April, into the warmer months? The only way to do that would be to keep Sam DarnoldÂ andÂ draft Zach Wilson…a situation the Jets must avoid at every cost.

No matter when this proverbial game of musical chairs began, some of the contestants have dropped out, opted to join other games, or both. One seat, that of the franchise quarterback role, remains, and it appears that two players circle it while the music plays: Darnold and Wilson.

As those other seats fill across the league, the incumbent Darnold remains a Jet with the team does their due diligence on his potential replacement. With Urban Meyer more or less eliminating any draft day surprises vis a vis Trevor Lawrence, draft day attention now turns to the Jets in the second slot. The consensus No.2 has become BYU quarterback Zach Wilson, who wowed many at his Provo-based pro day with Mahomes-like tosses. Among the awed was the Jets’ representative triumvirate of head coach Robert Saleh, offensive coordinator Mike LaFleur, and general manager Joe Douglas. The idea that Saleh and LaFleur’s former Bay Area comrades, equally perplexed over their own passing situation in San Francisco, traded to the third, not second, slot with Miami instead of the Jets served only to fuel the idea that Darnold’s green days were numbered.

"That's the throw of the Pro Day season right now."

If Wilson is truly on his way, a new debate is spawned: what to do with Darnold? One of the more fascinating “what if” situations on the modern NFL landscape is envisioning Darnold’s career if the Jets hired someone…heck, anyone…at head coach other than Adam Gase. The team has stocked up on affordable/bargain offensive weaponry this offseason that could provide Darnold some long-awaited professional stability.

But if Wilson is the way the Jets want to go…the Jets must cut ties with Darnold at all costs. The idea that this team can make it through a situation where two quarterbacks in their early 20s are on the same roster seems dubious at best. If Wilson’s Jets career begins, Darnold’s must end.

There’s no doubt that an incoming franchise thrower can benefit from having a veteran work alongside him, even through competition. That’s exactly how Darnold’s New York career began, after all, as he worked alongside Josh McCown for a season. But Darnold, set to turn 24 in June, isn’t exactly at the “veteran mentor” stage of his career. This is a quarterback who has displayed fleeting flashes of brilliance, enough for the casual observer to wonder if it’s a miracle in itself that he was able to briefly shine in the first place.

With the Jets cleaning their coaching house, there’s an opportunity to see Darnold work with a new staff. The idea of quarterback competition at camp could be interesting, especially if preseason games return this summer. Some might see Darnold as a reliable safety net if the unthinkable happens to the rookie, Wilson or otherwise. But when you’re trapped in a perpetual rebuild…one that just might see a light at the end of its tunnel…that’s not worth it. A Jets team divided amongst itself…especially at the quarterback position…cannot stand.

The Jets are in a position where they might finally be starting to right their ship. Whereas the hire of Gase was praised only by the hot take artists, players both domestic and abroad lauded the arrival of Saleh. It’d make sense to follow his vision as precisely as they can. At the same time, it means minimizing controversy, vital for a team whose smallest abnormalities are turned into memes because the mere concept of “LOL Jets” gets clicks.

There’s also no use in pulling Wilson’s leg, which the exact message that keeping Darnold sends. How can he ease into the franchise quarterback role when a young player who may be equally capable…the JetsÂ stillÂ don’t know…is sitting behind him? It’s one thing to bring an experienced mentor whose full-time starting days are probably behind him (i.e. Alex Smith/Brian Hoyer) or a relative veteran who’s proven reliable in a pinch (i.e. Nick Mullens/Blake Bortles). But to continue to work with a young quarterback and push him back to a backup role creates a problem where there doesn’t need to be.

The situation works on both sides. Though the scenario appears to become more remote with each passing day, there’s still a chance that Darnold could stay. If that’s the case, it’d be silly to say Darnold’s the starter and have the second overall pick breathing down his neck. Fans are set to return to MetLife Stadium this fall and the last thing Darnold would need is a chant for Wilson’s insertion every time he throws an incompletion.

While Saleh has carved out a hopeful path, he inherits a mess from the depths of the football netherworld that, again, needs little exacerbation. The defensive-minded Saleh must settle the uncertain secondary situation in the post-Jamal Adams era, while he and his offensive assistants also have to figure out an offensive line picture that, the arrival of Dan Feeney notwithstanding, doesn’t look much different from last season’s. To worry about the quarterback situation is simply thinking about another problem the Jets can ill-afford.

New York football will have its share of problems beyond April 29. With a glimmer at the end of the tunnel of rebuilding, but countless other turns to tackle in it, this quarterback issue can’t go beyond that.