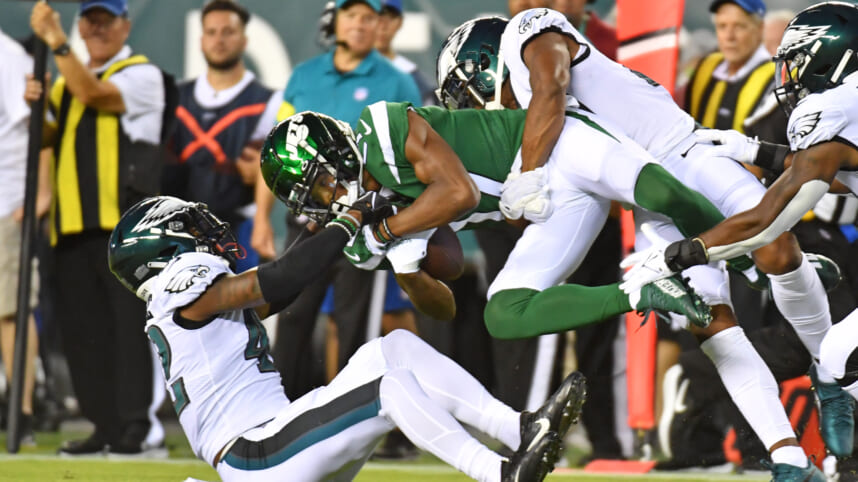 The New York Jets made an exciting draft pick in wide receiver Garrett Wilson with the 10th overall pick in this last draft. Wilson was added by the Jets to help Zach Wilson and provide a big-play threat presence to this offense. Already, early on as a rookie, Wilson is proving that he can be special for the Jets.

Throughout his first preseason game, Wilson displayed his ability to get open with ease using his quickness and athleticism. As early as the second play of the game, Wilson won from the slot generating a ton of separation for himself on a quick out route. His suddenness and change of direction are quality traits to Wilson’s game that enable him to win.

His second target of the game was a reception. Against tight coverage, Wilson showed the ability to gain ground and operate with a great release utilizing his quick footwork. At the top of the quick stop route, Wilson made evident his ability to stop on a dime and win.

On Wilson’s third and final target, he faced off coverage and outside leverage, running a deep in route, which he hauled in. Wilson sold speed vertically well to create space for himself at the top of his stem. He kept his in brake relatively flat, catching a well-thrown Mike White pass over the middle on the intermediate level.

In just his first game, Wilson lined up inside and out, showcasing his positional versatility. His speed, quickness, and change of direction athletically were all apparent. Wilson also proved his route running and how he can ultimately separate on multiple levels.

All throughout camp, the top attributes to Wilson’s game that make him unique have been evident. He has shown the contested catch ability and skills needed to haul in tough catches. Wilson has huge hands, long arms, the ability to jump, stay in the air, and adapt to high-point the football. His catch radius is one of his best traits. Lastly, his ability to win vertically with his 4.3 speed will allow him to provide the Jets’ offense with needed big plays.

Wilson has gotten off to a fast start and seems primed to be a consistent contributor for the Jets in 2022. His future is immensely bright. So far, in the early going, Wilson is proving why the Jets invested so much into him.