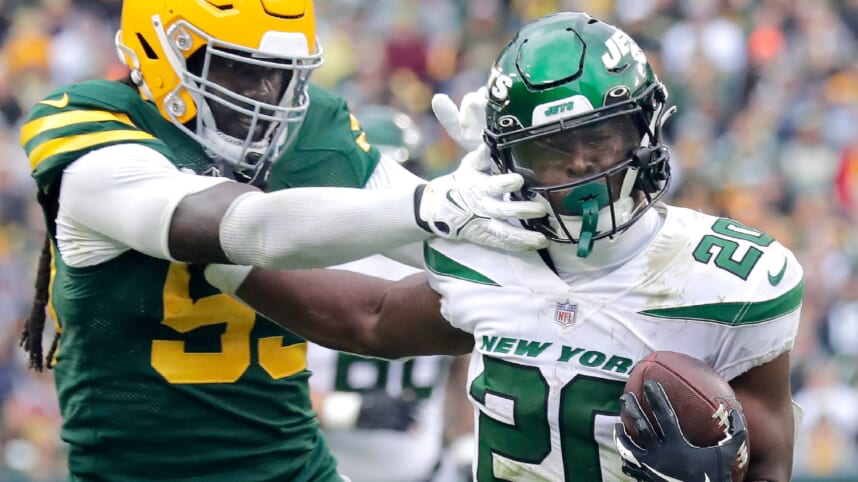 In the 2022 NFL draft, when the New York Jets traded up for running back Breece Hall, an immediate impact was expected.

Knowing how few positions are capable of giving more instant help like running backs, the rookie would help take pressure off of Zach Wilson in his second year while providing a spark to the Jets’ offense with big plays.

And over the course of just his first six NFL games, Hall has given the Jets an identity along with some incredible production.

Hall has a terrific complement in the backfield in second-year player, Michael Carter. It has led to some split time, especially in the first two games. Hall did not play more than 45% of the snaps in those first two weeks.

Starting in Week 3, though, Hall started to see a steady increase in his rep count. His percentage of snaps went up to 51% in Week 3. It has only gone up since then. Over the last three games, he has played at least 66% of the snaps offensively. Particularly, it has led to double the number of carries over the last three weeks in comparison to the first three.

Hall joined the Jets as a young player who turned 21 in May. With the combination of his impeccable college pedigree, offering of a complete skill set, along with physical and athletic gifts, it comes as no surprise how well Hall has thrived.

While sharing time with Carter, Hall has still posted some remarkable stats. He has 76 rushing attempts (12.7 per game), for 391 yards (65.2 per game), with 5.1 yards per carry and three rushing touchdowns. Of his rushing yardage, 279 have come in the last three games (93 per). To boot, as a receiver, Hall has 19 catches for 218 yards (11.5 per catch) and one touchdown. He has 609 all-purpose yards and four total touchdowns in six games.

With those numbers, Hall is currently on pace for 1,107 rushing yards and eight touchdowns on the ground. In the air, he is projected to catch 53 passes. From scrimmage, Hall is set for 1,725 total yards and 11 total touchdowns currently. Just some whopping production for a first-year player.

Over the last three games, when Mike LaFleur has put the offense on Hall’s shoulders, he has delivered in a big way. All three of his rushing scores have come, with one each game. In Week 5, he had 197 yards from scrimmage. Last week, in Green Bay, Hall put together his first 100-yard rushing day, totaling 116 while averaging 5.8 yards a carry. In Sunday’s win, Hall simply propelled the offense the entire second half.

Hall has shown there is nothing he cannot do. His combination of size at 5-foot-11, 217 pounds, and speed of 4.39 makes him dangerous. He runs with patience and good vision. Hall is quick to cut and picks up tons of explosion up the field while also having long speed to finish. His size gives him the power, play strength, and contact balance that make him tough to bring down. In the passing game, he is a natural catching the football with some impressive body control. He has also stepped up when needed as a pass blocker. On top of it all, Hall is a generational athlete with big-play threat ability.

To this point, Hall has been everything advertised and, possibly to some, even better than expected. He is well in the driver’s seat to winning Offensive Rookie of the Year.

Hall has brought tons of excitement to the Jets in just six games and has proven he has one long, bright future ahead of him with the team.