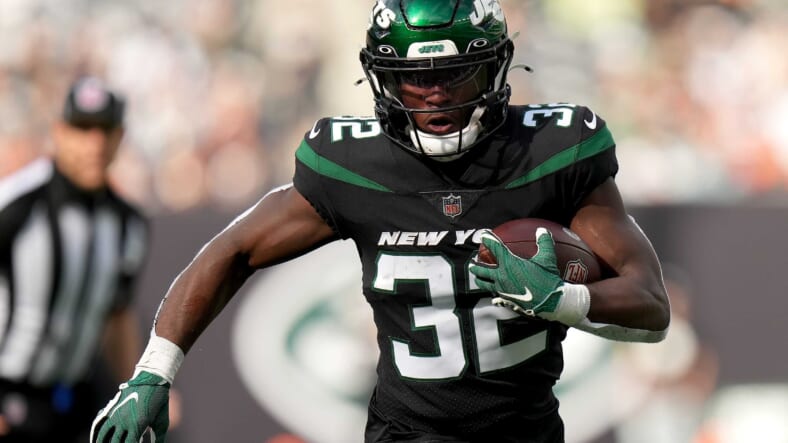 One of the many New York Jets to exemplify top-tier selflessness is second-year running back, Michael Carter.

After enjoying a great rookie year in which he was featured, averaging 4.3 yards per carry and totaling 964 yards from scrimmage, Carter took a backseat to Breece Hall with utmost professionalism.

Following Hall’s unfortunate injury, the Jets made yet another move for James Robinson. In Mike LaFleur’s weekly press conference yesterday, he was asked about how Carter has handled everything.

“He’s a pro. He wants to win. I probably have as much dialogue with Michael Carter for a lot of reasons. I have more respect for him as a human than I do even as a player and a co-worker. He’s handling it like a professional. He just wants to do his job and help contribute to win football games.”

During training camp, LaFleur stated that Carter is the leader of the Jets’ offense. This week, when running backs coach Taylor Embree and his wife had their kid, Carter took charge of the film session for the position group. Both LaFleur and Embree said this week that Carter carries himself well beyond his years.

Michael Carter is capable of propelling the Jets’ ground game:

Carter has undeniably proven himself as a strong off-field presence, one who is all about winning and leading the team. From there, it is important to remember that he can be a difference-maker on the field for the Jets’ offense.

In 14 games as a rookie, Carter got 147 carries, ran for 639 yards (4.3 per rush), had four touchdowns, and a longest run of 55 yards. He had great games against the Jacksonville Jaguars, Cincinnati Bengals, Miami Dolphins, and two against the New England Patriots.

Also, in 2021, Carter made plays as a receiver proving his versatility. He caught 36 passes for 325 yards (9.0 per catch). In his two best pass-catching games, Carter recorded nine receptions for 95 yards and eight receptions for 67 yards.

So far in 2022, Carter had by far his best game in Week 1. In that game, he had 10 rushing attempts for 60 yards and seven catches on nine targets for 40 yards, putting him at 100 yards from scrimmage.

In the Jets’ first win of the year, Carter caught all five of his targets for 27 yards and made clutch grabs on the game-winning drive.

Robert Saleh stated in his press conference earlier today that the newly-acquired Robinson’s status for this week is still to be determined. It is fair to expect, knowing how short of a time he has had with the team to pick up the playbook.

It leads to the point Carter can absolutely give the Jets a big game this week. Not only is Carter one of the most-valued Jets off the field, but a capable on-field game-changer.

Carter’s experience in LaFleur’s system, his past success, smarts, skills, and effort all give him what he needs to step up for the Jets in a big way. Expect Carter to deliver for the Jets the rest of the way.