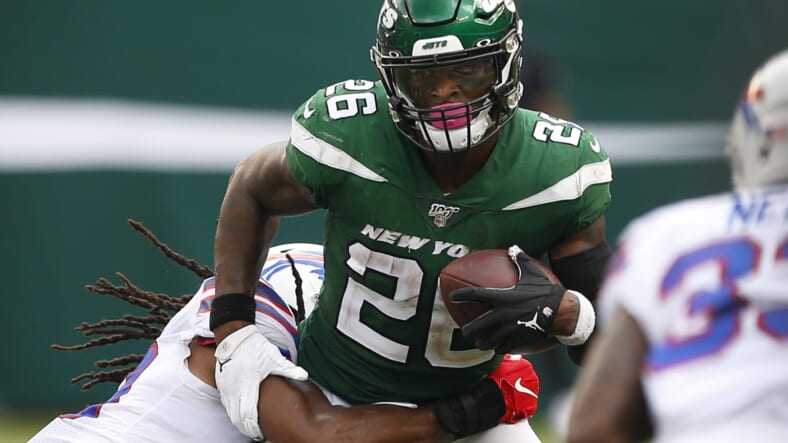 It didn’t take long for former New York Jets running back Le’Veon Bell to find a new home, as the defending champs offered a one-year deal.

Le’Veon Bell’s name was not long for free agency. Less than 48 hours after the New York Jets granted his release, the running back has agreed to a one-year deal with the Kansas City Chiefs. Though Bell will not be available for Kansas City’s Monday late afternoon tilt against Buffalo on Monday (5 p.m. ET, ESPN), Kansas City is set to take on the Jets on November 1 at Arrowhead Stadium.

Bell commemorated his move by sharing his image photos shopped in Chiefs gear.

Kansas City (4-1) has enjoyed the services of first-round rookie Clyde Edwards-Helaire at running back this season (10th in the NFL with 344 yards rushing), but have appeared to add themselves a very solid depth option in Bell. The rusher earned a pair of first-team All-Pro nominations and three Pro Bowl invites during his time with the Pittsburgh Steelers (2013-17) and ran for 5,336 yards in a black and yellow uniform. He inked a four-year, $52.5 million contract with the Jets after sitting out the entire 2018 campaign due to a contract dispute.

Through a series of alleged misuse and injuries, Bell was never able to regain his elite form with the Jets. He ran for only 789 yards and three scores last season, a full-season career-low. Bell partook in two games this season, partially sidelined by a hamstring injury that led to a stint on the temporary injured reserve. His final Jets showing came in a Week 5 return, when he ran for 60 yards on only 13 carries in a 30-10 defeat to Arizona.

Though the return on Edwards-Helaire has been strong in the early going, the Chiefs have struggled to fill the void left behind by Super Bowl hero Damien Williams, who opted out of the 2020 season. Current reserves Darrel Williams and Darwin Thompson have united for 67 yards on 17 carries.

As for the Jets, Bell’s release carries $19 million in a dead money cap hit over the next two seasons, including $15 million this year.

The Jets (0-5) will partake in their first Bell-free game on Sunday late afternoon against the Miami Dolphins (4:05 p.m. ET, CBS).