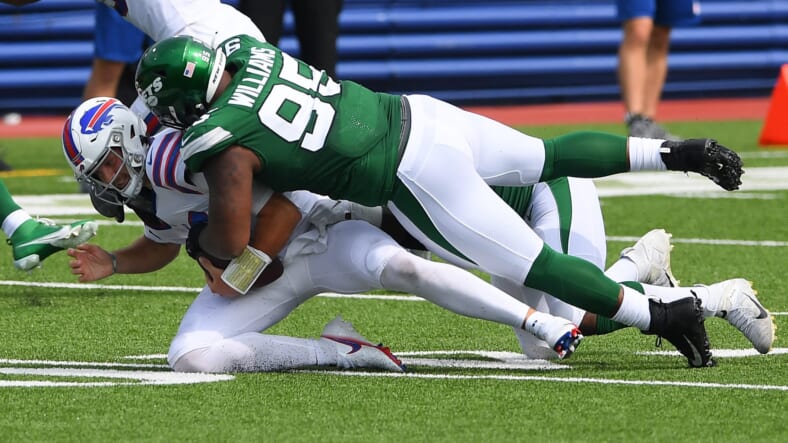 The New York Jets’ Sunday victory couldn’t stop the bad news from rolling in, as breakout star Quinnen Williams is done for the year.

The bad news keeps rolling in for the New York Jets.

Head coach Adam Gase announced on Wednesday that the second-year defender was “probably be done for the year”. Williams has enjoyed a breakout season after a tough rookie year, leading the Jets in sacks with seven, and has appeared at or near the top of several analytical lists documenting efforts from interior defensive linemen.

“Quinnen is in the concussion protocol and also has a neck (injury), he wonâ€™t participate (in practice),” Gase said on Wednesday, per notes from the Jets. The head coach further elaborated that he wasn’t exactly sure what the issue was, but Williams will probably go on injured reserve once he clears concussion protocol. This season’s injured reserve rules require players to sit out at least three weeks and there are only two games left in the season.

Gase did take the time to praise Williams’ development in year two. Williams was chosen third overall in the 2019 draft after only Kyler Murray and Nick Bosa.

“Heâ€™s done a good job. Obviously, Sunday you saw what kind of impact that he had, made a ton of TFLs, was in the backfield, created pressure,” Gase said. “I felt like he had a good run of games. I felt like his consistency was pretty good.”

“I mean, there were a few games where it was like, he kind of disappeared, but it didnâ€™t happen a lot. Last year, I felt like there would be a couple of games in a row where you kind of didnâ€™t really feel him, but this year I felt like the high majority of the games that you felt him. If you were on the other team you felt him, whether youâ€™re playing quarterback or in the run game.”

Williams had four tackles, including one sack, in his final game of the season, a 23-20 win over the Los Angeles Rams last weekend. He left the game in the second and the seen vomiting as he walked off the field toward the locker room.

In other injury news, Gase announced that Harvey Lagni, another defender with a neck ailment, would likewise be placed on IR. Cornerback Javelin Guidry (knee) was likewise held out of Wednesday’s practice. The Jets (1-13) did receive some good news with Folorunso Fatukasi emerging from the reserve/COVID-19 list. Fatukasi did not test positive but was deemed to have come in close contact with someone who did.

New York will partake in their final home game of the season on Sunday afternoon against the Cleveland Browns (1 p.m. ET, CBS).