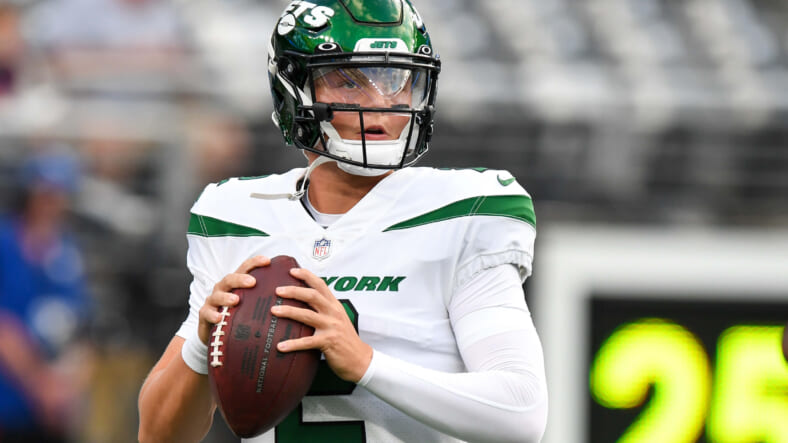 Wilson’s efforts in the New York Jets’ comeback win over Tennessee earned him Pepsi’s ROTW award by a sizable margin.

We love to see it, @ZachWilson.

Zach Wilson must be feeling downright bubbly after guiding the New York Jets to a come-from-behind victory over the Tennessee Titans on Sunday afternoon. He now has the award to prove it.

Wilson has been named the Pepsi Zero Sugar Rookie of the Week for Week 4 action, an award bestowed by the official soft drink of the NFL voted upon by fans. The Jets quarterback clobbered his competition with 77 percent of the vote with Green Bay cornerback Eric Stokes finishing a distant second (10 percent). Joe Tryon-Shoyinka, Mac Jones, DeVonta Smith, and Najee Harris were also nominated.

Trailing 9-0 in the first half, the Jets (1-3) erased a two-possession deficit thanks in part to Wilson’s efforts. The second overall pick of April’s NFL Draft proceedings got off to a tough start, completing only two of his first five passes for six yards, coupling that with an interception that came when Corey Davis fell down while running a route. He would finish the contest by completing 19 of his final 29 passes for 291 yards and two scores that went to Davis and Jamison Crowder. New York took home a 27-24 overtime decision from the defending AFC South champions, earning the Jets’ first comeback victory after trailing by two possessions since December 2018.

With this honor, Wilson ends the two-week monopoly Los Angeles Chargers cornerback Asante Samuel Jr. had on the award. He also becomes the first quarterback from the 2021 draft class to win the award and second offensive player after Cincinnati receiver Ja’Marr Chase triumphed in Week 1.

Wilson and the Jets will return to action on Sunday morning as they head overseas to battle the Atlanta Falcons in London (9:30 a.m. ET, NFL Network).