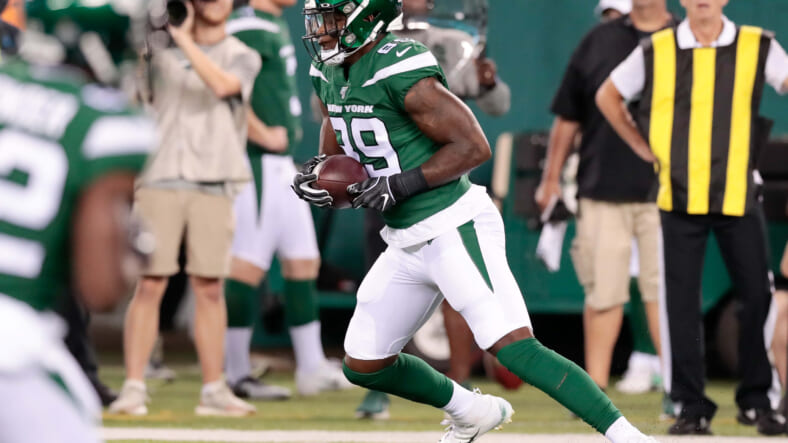 For the first time in 2020, the New York Jets are having a practice. The team was originally supposed to play their preseason opener against the Giants and have an off-day today, but things changed. Regardless, seeing the team practice today is a welcomed sight.

With practices now beginning, there are a few position groups to watch for. The following groups are ones to focus on for battles and, simply, just for the possibility of new names pushing for more playing time:

This is an interesting group to watch because the Jets have, ideally, two starting-caliber players: Ryan Griffin and Chris Herndon. The position was held down last season by Ryan Griffin, as Herndon played in just one game. Griffin totaled 34 receptions for 320 yards and 5 touchdowns across 13 games. With those 34 receptions, he posted a catch percentage of 82.9%, which is by far the highest of his career. His play earned him a three-year extension worth up to $10.8 million.

With his production and extension, the expectation is that Griffin will retain the starting tight end spot. However, once upon a time, Chris Herndon had Jets fans excited about his own play. Then, last season happened and he only appeared in one game due mostly to a fractured rib. The season before, however, he showed some promise as a rookie. During his rookie season in 2018, he totaled 39 receptions for 502 yards and 4 touchdowns.

If Chris Herndon can stay healthy and on the field, it’s going to be an interesting battle at tight end throughout the season. Both Herndon and Griffin are capable of making plays, but only one can be the number one guy.

C.J. Mosley is the best linebacker the Jets have. He opted out of the season. Now, Avery Williamson is expected to be the top guy for this group. Williamson missed all of last season with a torn ACL, but now that he’s assumed to be healthy and ready to go, he should get even more playing time and responsibility.

His first season with the team in 2018 was the best of his career. He totaled 120 tackles, 3 sacks, 2 forced fumbles and an interception. In a past article, I compared Williamson’s numbers to Seattle’s Bobby Wagner. I won’t be making another extremely bold point here again, but he can definitely produce like a number one linebacker.

Aside from Williamson, inside linebacker should also be played mostly by Neville Hewitt and new addition Patrick Onwuasor. A sixth-year player, Neville Hewitt had his best season last year. He finished his 12 games played with 75 total tackles, 3 sacks and 2 interceptions, to name a few of his statistics. He had a solid year, but nothing is promised for him.

Patrick Onwuasor has played the last four seasons with the Baltimore Ravens as a rotation player, for the most part. Last season, he played in 14 games, starting 6. In those games, he totaled 64 tackles, 3 sacks and a forced fumble. Onwuasor will most likely not be starting alongside Avery Williamson, but the Jets could make it an interesting group if all three are playing well.

The Jets’ kickers haven’t been great in recent years, with an exception to the season Jason Myers had in 2018. Last season, the kicking role was controlled by Sam Ficken who made 70.4% of his field goals and 88.5% of his extra-point attempts. Those aren’t great numbers in any sense and, although they may go unnoticed at times, kickers are field goals are vital to wins. That was seen in Week 1 against the Bills last season when the Jets lost by one due to missed kicks.

Now, former Cowboys kicker Brett Maher has been brought in to compete for the job. With Dallas last season, Maher made just 66.7% of his field goals but converted all of his 36 extra-point attempts. Both kickers have to improve if they want to hold the starting job. If either struggle, we may see a week-to-week change at kicker.

These three positions are ones-to-watch during practices and this upcoming season. There may be more positions that could be intriguing, but these are the main ones in my opinion. One thing is for sure, these positions will all be fun to watch.