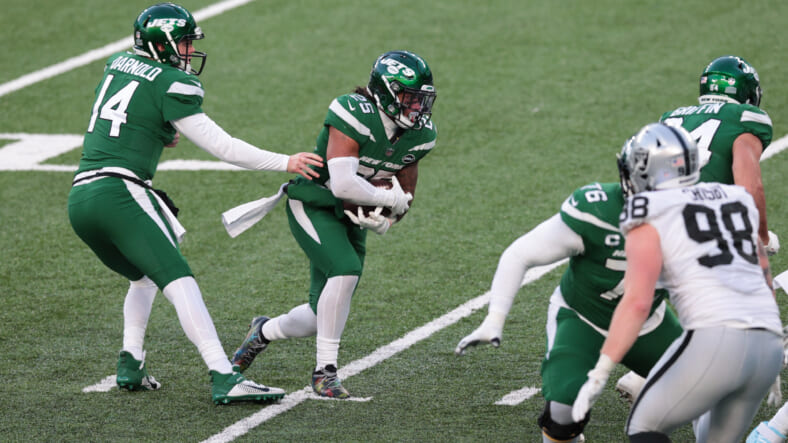 How will the New York Jets move on in their rushing situation after Le’Veon Bell? ESM investigates in Part II of its offseason preview.

If you told New York Jets fans this time last year that Le’Veon Bell would be getting ready to play in Super Bowl LV, they would be ecstatic and likely booking their flights and hotels to/in the Tampa area.Â Alas for the wearers of green, we’re enduring a socially distanced Super Bowl this year that will limit attendance. If Bell plays, he will not represent the Jets, but the Kansas City Chiefs, having been mercifully granted his New York release after 17 games over the last two seasons.

Upon his departure, Bell left behind an aura of uncertainty with the Jets rushing situation…and that can’t be pinned entirely on his release. The Jets had an opportunity to clear up their rushing future with several viable candidates. Fourth-round rookie La’mical Perine was emerging from an early stretch of injuries while the Jets added former Detroit draft pick Ty Johnson off waivers. Joe Douglas’ former Philadelphia disciple Josh Adams was also called up from the practice squad. Alas, New York opted to give most of its rushing opportunities to an aging Frank Gore, who put up a career-low 3.5 yards a carry and never reached the 75-yard plateau.

While Perine (64 carries, 232 yards, 2 scores) struggled to gain traction, missing six games due to injuries and a late positive test for COVID-19, Johnson and Adams took advantage of the little opportunities left. The pair united for 178 yards in a December contest against Las Vegas, with Johnson accounting for the first triple-digit rushing game for a Jets back in over two calendar years.

One can easily respect the brilliant, resilient NFL career of Gore while acknowledging that it’s probably not the best idea to make him your feature back at age 37. But that’s exactly what the Jets tried to do last season, and it didn’t end well. Again, one can’t entirely pin the disaster on Gore, who had a purpose upon his signing. No one was going to quarrel with the veteran Gore coming to New York and serving as a spell option, mentor, and veteran leader, but making him the top back after Bell’s release was ill-advised, especially when the macabre gift of consequence-free football games would’ve allowed the Jets to try something new.

Gore hinted at retirement during the season but left the door open to a 17th season earlier this winter, telling team reporter Jack Bell “I haven’t made a decision yet”. He ended the 2020 campaign as the third-leading rusher in NFL history at exactly 16,000 yards, behind only Emmitt Smith (18,355) and Walter Payton (16,726). Whether he’ll add to that tally remains to be seen, it’s possible additional yardage could be earned in a Jets jersey. Several of Gore’s younger teammates often cited the value of his veteran leadership and the Jets could be getting even younger at some of their most vital positions…i.e. quarterback. Then again, Gore may be better off “ring-chasing” as the Jets seek to make their own luck moving forward.

After all the drama, someone with the name “J. Adams” actually contributed something positive for the Jets in 2020. Adams previously worked with Douglas as an undrafted rookie during the Eagles’ failed Super Bowl defense in 2018, picking up a team-best 511 yards. One of Douglas’ first moves upon taking the Jets’ GM spot was to pick up Adams after he was a part of Philadelphia’s final camp cuts the following year. Adams played sparingly in his New York debut but led Jets running backs with a 5.4 average carry (albeit on 29 attempts) last season.

Adams’ familiarity with Douglas could potentially work in his favor if he’s interested in a reunion, but he may seek a new destination with more consistent opportunities to avoid getting lost in the fold.

Unlikely. The Jets just used a fourth-round choice on Perine last spring. They will likely turn to free agency to find a more established primary option, whether it’s in preparation for someone like Perine or Johnson to take on the role full-time or a longer-term option. It has been a long time since the Jets drafted a running back during the draft’s early portions, their last selection over the first two days coming in 2009 (Shonn Greene), but there are far too many holes to fill to “waste” an early pick on a rusher.

Another future Super Bowl participant, Fournette could work in the same capacity Gore did: serve as a calming veteran prescience that knows how to win. In addition to his upcoming trip to the Big Game, Fournette was also involved in Jacksonville’s surprising trip to the AFC title game in 2018. The true difference from the Gore era would be that Fournette, 26, has proven he can still handle the workload of a top rusher. He has come up particularly big for the Buccaneers during their title run, putting up 313 total yards and scoring a touchdown in each of the three games.Â

It’s possible the Jets could go with a rusher-by-committee approach, though they could use an experienced option to head up the group. Brown will likely seek a new opportunity after sharing duties with Cam Akers and Darrell Henderson in Los Angeles. He and Henderson led the Rams in rushing scores with five each.

It has been a while since the Jets experimented with a fullback, their last legitimate project perhaps being Lex Hilliard in 2012. They briefly toyed with tight end Trevon Wesco in the spot but more or less abandoned it when the sophomore dealt with injuries this season. Adding Juszczyk, who would be familiar with Robert Saleh and Mike LaFleur from his San Francisco days, would give the Jets not only a player with winning experience but a goal-line option to go along with his traditional blocking duties. Juszczy, a five-time Pro Bowler, scored a career-best six touchdowns this season, including two in his first multi-score game against Arizona in December.

There is certainly plenty of room to get better when it comes to the Jets’ run game, but, for a team that has so many holes, bolstering the unit may take a backseat while they settle some other affairs. Combine that with a relatively weak free agent class (the top overall options may be Fournette, Kenyan Drake, and Todd Gurley) and the Jets’ still recovering from the Bell debacle, it’s difficult to imagine them making too drastic of a movie. There’s certainly potential from the names on the roster right now, but the Jets’ failure to perform extensive research once Bell left could come back to hurt the team in the near future. An opportunity presented itself to check something off the offseason checklist, but they opted to give that opportunity to a potential Gore retirement tour.