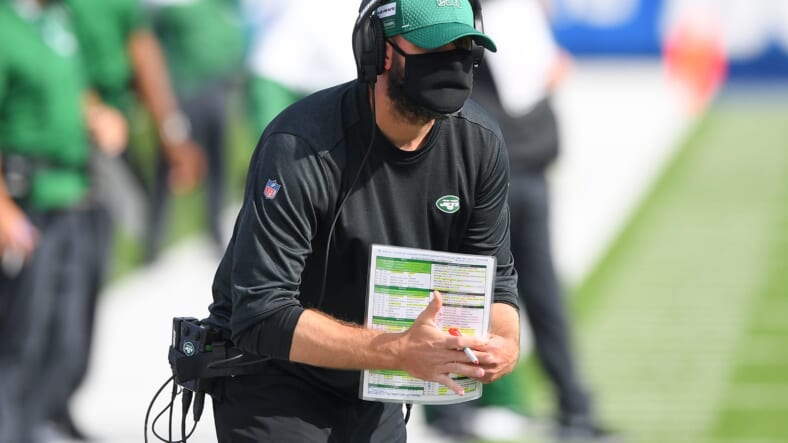 The New York Jets are the lone winless team through eight games. How long can this remain the case? Well, the entire season, in fact. The Jets have the third-toughest remaining schedule, so they could realistically finish 0-16.

It’s widely known that they’re winless and haven’t looked competitive, but how exactly did they get to this point? This is how:

Through 8 weeks, the Jets are ranked last in total offense, averaging just 259 yards per game. Not only is that the lowest total in the NFL, but it’s 32.8 yards behind the 31st-ranked offense of the 1-7 New York Giants. For some, 32.8 yards may not seem like a lot, but for the Jets, they have gone entire quarters, and even halves, with around that amount of yards.

Their total offense numbers are comprised of passing and rushing, obviously, but both areas are not indicative of their ranking.

The Jets do, in fact, rank last in passing yards per game with just 155.9. Their passing attack has been dreadful, to say the least. Some of it is on quarterback play, some is on play calling and some is on surrounding playmakers. Both Sam Darnold and Joe Flacco have started games at quarterback this season and neither has been impressive. Darnold, through six starts, has totaled 1,045 yards with a 58.64 completion percentage, three touchdowns and six interceptions. After watching the games and seeing those numbers, it’s hard to decide which is more putrid.

Joe Flacco has started two games for the Jets and it may become three if Darnold doesn’t play against New England Monday. He has played in three games, though, due to a lingering Darnold shoulder injury. Thus far, he has totaled 397 yards with a 51.9 completion percentage, one touchdown and one interception. Receivers have been out all year for the Jets also, primarily new addition Breshad Perriman and rookie Denzel Mims.

Running back has been somewhat of a carousel, as well. Le’Veon Bell was released a few weeks ago and both Frank Gore and rookie La’Mical Perine have seen carries, with neither clearly emerging as the best option. However, their rushing attack hasn’t been awful, which is the part of their offense that isn’t necessarily indicative of their ranking. They have the 22nd-ranked rushing attacks, averaging 103.1 yards per game.

I’m not going to get into the play-calling aspect, because the whole world seems to think Adam Gase doesn’t deserve to be an NFL head coach, so we’re all on the same page. However, if you want to laugh, I have a relatively funny stat for you:

The Jets are the only team yet to score 100 points this season, sitting at 94. That’s an average of 11.8 points per game. It’s not pretty, but sometimes you have to laugh at things you inexplicably love.

The Jets’ defense gives up an average of 398.9 yards per game, which ranks them 26th. Sure, one can argue that them being on the field the entire game since the offense can do anything is to blame, but it isn’t. Whichever cornerback you want to look at, they seem to be unable to stop receivers on third down. It seems as though every third down has an opposing receiver wide open, with no one within three yards of him. It’s frustrating to watch, even though it’s known there are no elite, let alone above-average, corners on the team. As a result, they allow the fourth-most passing yards per game with 282.8.

One relatively “bright” spot in this dull defense is their rush “prevention” group. They are ranked in the top half of rush defenses at spot 14. They allow an average of 116.1 rushing yards per game. That isn’t great, but it’s far better than their pass defense. In past years, their rush defense has usually been better than their pass defense, but it’s impossible to say either has been impressive this season.

On a good note, linebacker Neville Hewitt is in the top-10 for total tackles by linebackers with 67.

With the Jets hosting the Patriots on Monday, they could either be potentially tied with the worst record at 1-8 or hold on strong to being the worst at 0-9.