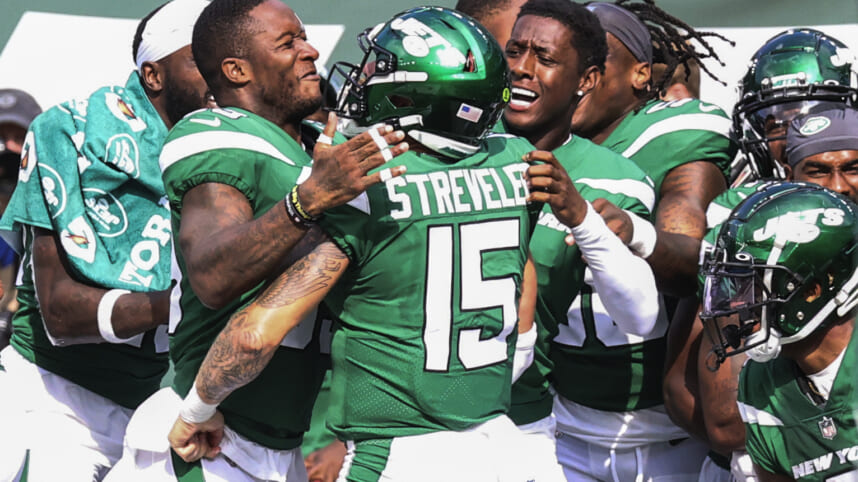 The 2022 preseason for the New York Jets is now in the rearview mirror. They wrapped up exhibition play this afternoon with a 31-27 last-minute victory led by the star of this preseason, Chris Streveler.

This preseason game was the best the Jets had this summer. After tough first half’s in each of the first two games, the Jets got off to fast starts on both sides of the football today.

All three quarterbacks led good drives and put points on the board. Starting with Joe Flacco, aside from his interception, the 15-year veteran did some solid work. He got off to a quick start on the first drive and remained in good rhythm up until the turnover.

Mike White put together his best preseason outing. He finished 13-of-17 for 170 yards with two touchdowns and no interceptions. He led a capable two-minute drive before the half.

The preseason excitement of Chris Streveler continued once again. He went 10-for-13 with 96 yards along with two touchdowns and no interceptions. Streveler led the Jets to 14 fourth-quarter points. His game-winning drive was thrilling. What happens with Streveler from here remains to be seen. Nonetheless, he could not have done better for himself in the three preseason games.

All of the Jets’ skill position players were involved today. The star was Denzel Mims. After a recent trade request, Mims went out and had one incredible day. He had seven catches go for 102 yards and a touchdown.

Braxton Berrios and Jeff Smith both had second-quarter touchdowns and over 35 yards receiving a piece. Rookies Breece Hall and Garrett Wilson both had one big play. New tight end Tyler Conklin exhibited some of his exciting potential. He caught two passes for 27 yards. The run blocking up front had some rough moments in this one, and the starting group will need to continue to gain reps together.

Better start from the defense:

Following two tough starts in the first two preseason games, the Jets’ defense showed improvement early in this one. Some notable starters made an impact. Quinnen Williams and Carl Lawson were both active, and making their impact felt upfront. Jermaine Johnson continued to show excitement.

In the secondary, Michael Carter II shined. He helped end the first two drives. The first one creating pressure from the edge on a sack. His second splash play was an interception. Carter has the skill set to improve as a second-year player.

Following the starters, a few players, in particular, showed out defensively today. The depth on the line was noticeable. Young pass rushers Micheal Clemons, Bryce Huff, and Bradlee Anae all had a pressure generated at some point. On the second level, Kwon Alexander and Jamien Sherwood both made their presence felt physically. With Sherwood, it is encouraging to see the growth in year two made this preseason. Lastly, in the secondary, Will Parks yet again finished a few plays. He was working with the second team and seems more than deserving of being on the final roster.