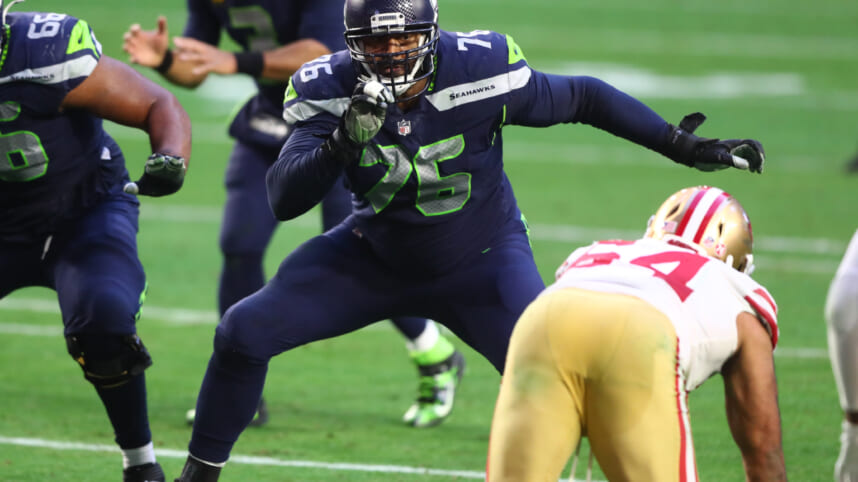 One of the biggest pieces of news this week for the New York Jets is the availability of Duane Brown. The 15-year veteran left tackle was eligible to come off of the four-week injured reserve this week. He did, as earlier in the week, Brown returned to practice for the Jets. Still, whether or not he was going to be activated and play in Week 5 was an unknown.

Duane Brown states he is good to go for the New York Jets:

Head coach Robert Saleh made known Wednesday when Brown got back on the practice field that a lot would be figured out in 48 hours. Following that period, now, Brown himself seems more than ready to make his Jet debut.

Brown met with reporters today. He said, “as of now, I’m good to go” for Week 5 against the Miami Dolphins this Sunday.

Earlier today, Saleh also stated to the media that “everything went good” in yesterday’s practice for Brown. In turn, he was a full-go for today’s practice. Saleh said that he ultimately remains a “game-time decision.”

Having Brown play as soon as possible at 37 years old, coming off injured reserve, is impressive and big for the Jets to win this game. The Jets’ recent injuries at offensive tackle with George Fant and Max Mitchell are well known.

Having Brown gives the Jets a crucial boost at the position. It would likely lead to yet another week of changing positions for Alijah Vera-Tucker. The Jets, as offensive line coach John Benton stated this week, will get the best five offensive linemen they have on the field. Brown is certainly one of those five at the moment for the Jets.