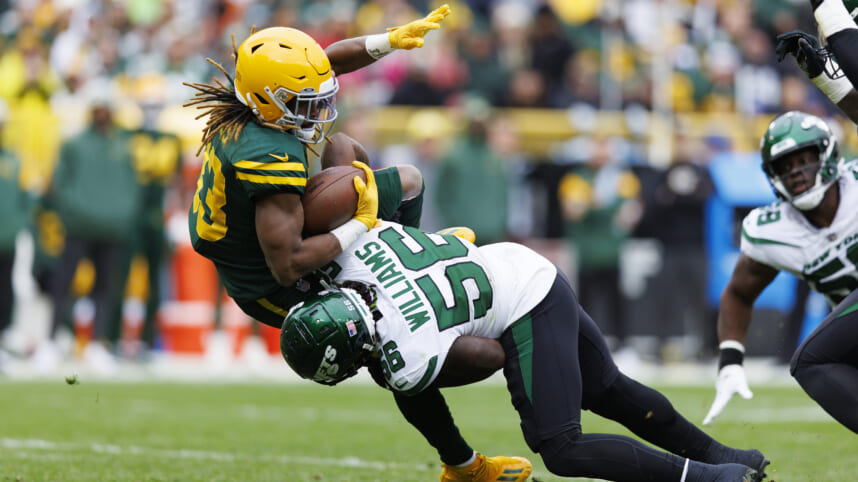 The growth of fourth-year linebacker Quincy Williams has been one of the more promising elements early to the 2022 New York Jets season.

Williams was claimed by the Jets shortly before the start of the 2021 regular season through waivers. As a former third-round pick in 2019, the Jacksonville Jaguars had seen enough of Williams after just two years.

Williams, now 26, had just turned 25 when the Jets added him as a waiver pickup. In his first year with the Jets, Williams displayed tons of thrilling traits. Whether it be utilizing his speed, physicality, range, or explosiveness, Williams had some enticing moments in 2021.

At the same token, Williams made some mental mistakes. His aggressive playing style led to pursuit angles that, at times were far too sharp, missing some tackles. And when his pursuit angles were on point, Williams’ form tackling was not always up to par.

His overall inconsistency in 2021 led to many believing a more reliable starting linebacker alongside C.J. Mosley had to be acquired this offseason. In the end, the Jets only made one noteworthy addition, and it was right before training camp with Kwon Alexander.

Through the first six games of 2022, Williams has potentially shown more development than anyone on the Jets.

He has worked to limit the mental mistakes from a year ago.

From there, the natural ability athletically along, with the physicality he brings, has been able to take over, and he has executed at a high level.

Williams deserves a ton of credit for returning from a gruesome injury as fast as he did as well. When he had to be carted off in Week 3, his return certainly did not seem imminent. Somehow, Williams was available for the Jets after missing just two games.

In his Week 6 return, Williams was utterly dominant. Whether it be playing the run, in coverage, showcasing his speed and physicality, Williams did a little bit of everything in the Jets’ dominant defensive performance.

On this first play below, it is a third and long, and the Jets drop back into a Cover-3. Williams does a good job of playing right around the line to gain with his eyes locked on Aaron Rodgers. Before Rodgers steps up and lets it go, Williams instinctually reads it and does a good job of changing his direction.

From that point, he takes a safe, downhill pursuit angle. Finally, as Williams can always do, he gets low and delivers a punishing hit in space.

On this next play, Quincy is stacked behind his brother, Quinnen Williams. The two combine on this run stop.

Off the ball, Quincy displays good patience, reading and reacting to what is happening in front of him. Once he sees the run, he commits downhill and has space to operate in front, thanks to Quinnen’s lateral quickness of the snap. Lastly, Williams takes a perfectly tight angle laterally after gaining just enough ground working vertically and finishes with effort.

In the third play here, Williams shows good awareness with holding his gap. While working laterally, he keeps just enough outside contain as well, knowing how much space out wide he is responsible for. It forces AJ Dillon to plant his right foot and stay inside, working directly up the field. Williams goes low and works with C.J. Mosley for the stop.

This play, along with the first one, were the two biggest highlights for Williams in this game.

He reacts to the run blocking perfectly (from end zone view), knowing where it’s going. Williams takes a perfectly tight angle, displays his speed from the backside, shoots through the hole, and uses that momentum while getting low at the point to deliver a physical tackle.

On the final play here, Williams reads the blocking once again. The Packers do pull their left guard and center. But thanks to a hard edge set by Carl Lawson, Dillon has to bounce the run upfield.

Williams does a good, patient job in pursuit, maintaining the outside knowing, he has help with Sheldon Rankins, John Franklin-Myers, and Mosley pursuing from the backside. His outside leverage forces Dillon to slow down because he still looks to get to the edge with the run. Finally, when Dillon completely stops after Quinnen works off his block, Quincy attacks and finishes with the tackle.

In these few plays, we are seeing Quincy’s patience when required on some longer developing runs yet a fast trigger when needed to quickly make a play. He is wrapping up his tackles, showing progress where it is needed from a year ago.

With his mental development, we are seeing the natural physical and athletic capabilities of the 26-year-old linebacker, Williams.

Williams is joining former Joe Douglas waiver claims in John Franklin-Myers and Braxton Berrios who, both earned second contracts within the last 12 months as yet another incredible waiver pickup.