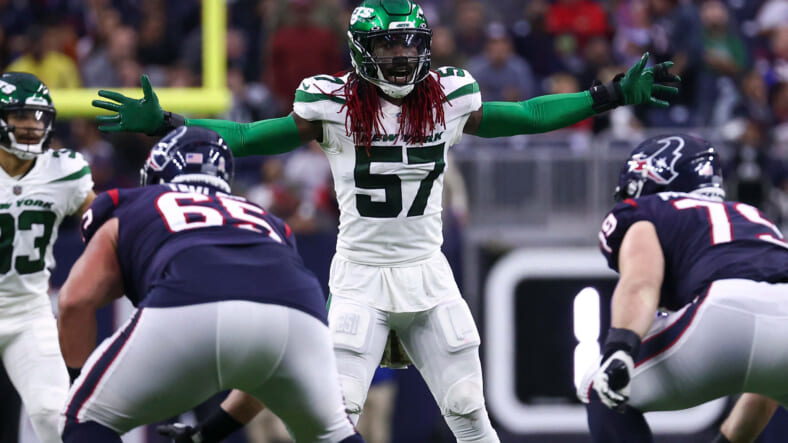 Following final cuts to get the New York Jets roster down to 53 players, the Jets were slightly over the budget for the 2022 season. They needed to free up cap space with either a release, restructure, or extension of a player or two’s contract.

A few of the top discussed possible outcomes were letting go of Justin Hardee, extending George Fant, or restructuring the contract of the highest cap hit on the Jets, C.J. Mosley.

Ultimately, the Jets went through on a renegotiated contract with linebacker, C.J. Mosley.

Mosley has three years left on his five-year mega-contract. Prior to his restructure, Mosley had a 2022 cap hit of $17.5 million. Now, per Over The Cap, it is down to $5.6 million.

As is the case with restructured contracts, the prorated (signing) bonus money increases. To limit the prorated amounts throughout the duration of Mosley’s three final years under contract, the Jets, as it has become popular throughout the NFL, added two void years onto Mosley’s deal. He currently accounts for the Jets cap in 2025 and 2026, but that can easily be erased as long as he is released prior to the 2024 season.

Mosley was originally owed a $16M salary for this year. The Jets now have his salary down to the veteran minimum of $1.12M. The remaining $14.88M now comes from his signing of a restructure, which in turn raises his prorated bonus. With the two void years tacked on, his prorated amount only increases from $1.5M to $4.476.

The question becomes, will Mosley be a Jet in 2023, and what are the cap ramifications? His new prorated bonus boosts his cap number next year to a nearly steep amount of $21.5M. Of that, $14.9M goes to waste with a pre-June 1st cut. With a post-June 1st designation, the Jets would free up $17M (his entire salary), which is all non-guaranteed.

The issue with the post-June 1st designation next year is that in 2024 he would still count for $10.4M against the budget. So either way, the Jets now face more dead money than before. Ultimately though, Joe Douglas had to get under the budget for this year.

Mosley is a core Jet, respected leader with a pedigree and prior winning experiences. The 2022 season is a pivotal one in which he needs to make his impact felt as this Jets defense must improve.