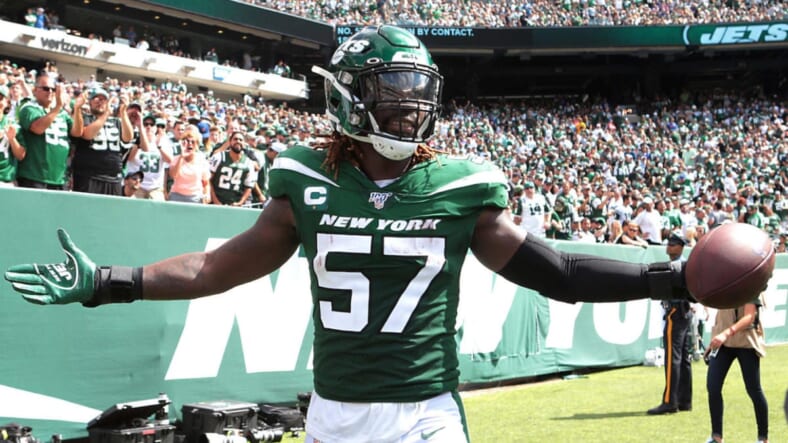 It had been over 500 days since New York Jets fans got to see their team play a sanctioned football game at MetLife Stadium in person. Perhaps only an on-field attendee, Jets linebackerÂ  C.J. Mosley, had to wait longer.

Mosley put on his New York uniform on Saturday night to partake in the Jets’ 12-7 preseason victory over the New York Giants. It was the first time his game day equipment had been worn since a Monday night game against New England in October 2019. Mosley helped the Jets’ strong defensive effort, one that held the Giants to 163 yards on the night, get off to a strong start.

Working next to newcomers Jarrad Davis and Hamsah Nasirildeen on the premier unit, Mosley rejected a Mike Glennon pass intended for Darius Slayton. Two plays later, Bryce Huff earned a seven-yard sack to force the Giants into a three-and-out after just 61 seconds of game time. The Jets (1-0) would get the ball at their own 36 after a punt and tallied a 30-yard field goal to go up 3-0 after the opening drives.

Mosley also appeared on the Giants’ second offensive possession, where he picked up two tackles, though one was erased by a Jets penalty. The Giants picked up two first downs, but the Jets limited the damage to 32 yards on seven plays, the last of which was a punt.

Despite relatively minimal work, it was hard for Mosley to hide his enthusiasm in the aftermath. The linebacker issued a foreboding warning to future visitors of East Rutherford that underestimate the Jets’ defense.

â€œIf people come with that same mentality, theyâ€™re going to get their (butts) blown out,â€ Mosley said of those who expect the idea of “Same Old Jets” to continue this year, per Ralph Vacchiano of SNY. “Thatâ€™s 100 percent, whether weâ€™re at MetLife or anywhere else. If they think thereâ€™s anything old about this Jets team, itâ€™s not going to end well for them.â€

Mosley will be working alongside several touted newcomers this season. The Jets made their pass rush a priority despite several young breakouts headlined by Quinnen Williams. Pressure artist Carl Lawson comes in from Cincinnati while Sheldon Rankins arrives from New Orleans. The revamped unit was on full display against the Giants, as the Jets took down Glennon and Clayton Thorson five times. Their last takedown becoming a safety when another sixth-rounder (Jonathan Marshall) took down Thorson in the end zone. Huff had two sacks on the night while undrafted rookies Hamilcar Rashed and Michael Dwuomfour also got involved in the tally.

Mosley is a bit of a stranger to New York himself. Signed to a five-year, $85 million deal during the 2019 offseason, Mosley was the last big ticket arrival of the Mike Maccagnan era. He has partaken in only two games since then, besieged by medical calamities of both a football and non-gridiron variety. The former Baltimore Raven and four-time Pro Bowler has appeared in only two Jets games over the last two seasons. Groin issues limited him to two games in 2019 while he opted out of last season’s proceedings due to the COVID-19 pandemic.

Thrown into action in the preseason opener, Mosley was going to take full advantage of any game snaps, even if they came in an exhibition contest. Mundane gameday tasks like getting to East Rutherford and even hooking up with the team during the pregame took on a whole new meaning after nearly two full years away from the field.

“You can never take this game for granted. Any time you step on the field you want to try and give it your all and take advantage of every opportunity you get,” Mosley said, according to team reporter Jack Bell. “Driving to the team hotel, that’s something I haven’t done in a long time. Going to the meetings at night, waking up in the morning and getting back to my routine. There was even a little traffic to getting to the stadium. I’m embracing everything.”

Time will tell if Mosley is a fit in what head coach Robert Saleh and defensive coordinator Jeff Ulbrich are trying to build through their reintroduction of the 4-3 set. Fate has given him every reason to believe that his New York tenure is cursed, but he’s defying the conventional metropolitan pessimism.

“Weâ€™ve just got to make sure that we hold each other accountable every day when we go to practice, make sure we try to stay as healthy as possible…have the same mindset, same goal to win every game.â€

Mosley and the Jets will return to preseason action on Saturday night, when they battle the Green Bay Packers on Saturday late afternoon at Lambeau Field (4:25 p.m. ET, WLNY/NFL Network).