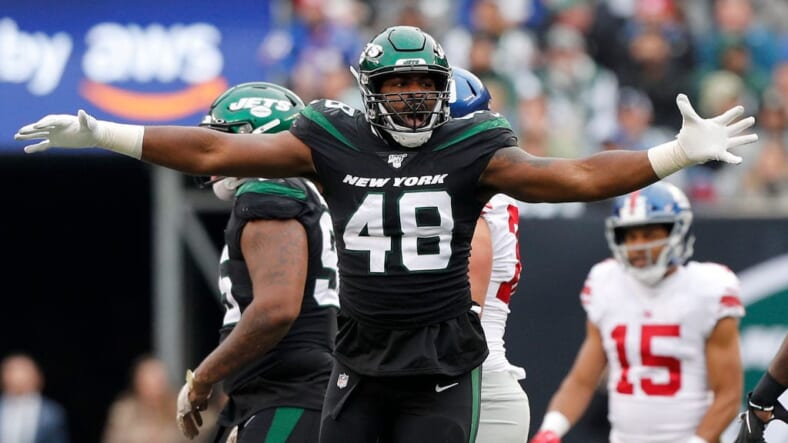 Two New York Jets defenders will see their season end prematurely, as Jordan Jenkins and Saquon Hampton have been placed on IR.

The New York Jets announced on Wednesday that defenders Jordan Jenkins and Saquon Hampton will be placed on injured reserve. With visits to IR lasting at least three weeks, their seasons are effectively over.

Jenkins (shoulder) had partaken in 12 games this season, missing last weekend’s visit to Seattle. His fifth season as a Jets ends with 32 tackles, including a pair of sacks, after earning 15 quarterback takedowns over the last two seasons. The linebacker, 26, joined the team as a third-round pick (83rd overall) in 2016. He is set to become a free agent this offseason after inking a one-year, $3.75 million deal.

Hampton, 25, returned to New Jersey after starring in his native Hamilton and later in college at Rutgers. A member of the secondary and former sixth-round draft pick in New Orleans, Hampton joined the Jets in November after he part of the Saints’ final training camp cuts. He made his New York debut on Sunday in Seattle, partaking in five special team snaps before leaving with an Achilles injury.

As the Jets (0-13) prepare to partake in their final games of the season, they’ll be missing some crucial names on defense. Jenkins becomes the sixth opening day starter to not finish the year on the active roster, whether it’s through injury or transactions. His role at outside linebacker will likely be filled by rookie Jabari Zuniga, who has mostly been used as a defensive end but maintains experience from his days at Florida.

Earlier this week, the Jets partially prepared for the medical departures by signing Trevon Coley on Monday, two days after he was released by the Arizona Cardinals.

New York continues to play out the final stretches of their schedule out west, as they’ll wrap up their interconference slate on Sunday at SoFi Stadium against the Los Angeles Rams (4:05 p.m. ET, Fox).