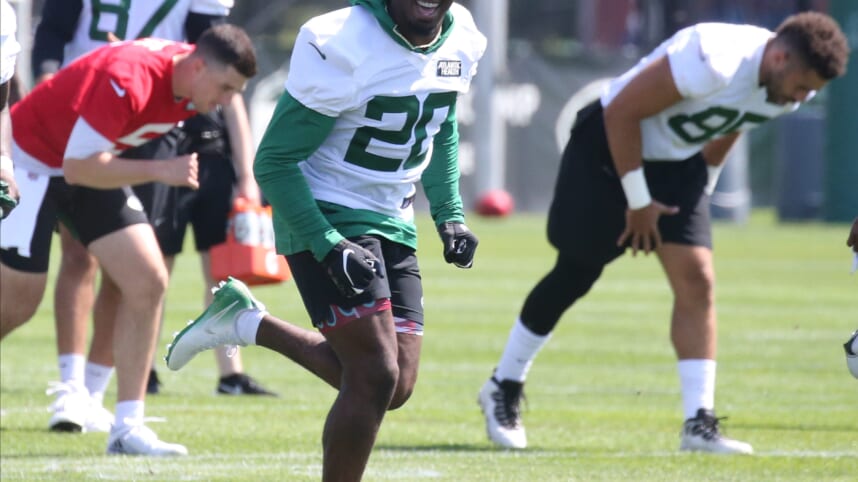 The New York Jets hosted the Atlanta Falcons for the first of two practices between the teams Thursday morning prior to Monday night’s game at MetLife Stadium.

In today’s joint practice, the Jets offense led by Joe Flacco attained some great success. Flacco was accurate most of the day and showed he still has a strong arm.

Whether it was in 11-on-11 move-the-ball periods or two minute, the Jets’ offense moved the football with relative ease. The Jets consistently gained positive yardage on both the ground and through the air. Many skill position players were involved as the ball was spread around fairly well.

Starting with the ground attack, rookie Breece Hall continues to generate a ton of excitement. Early on in 11-on-11 work, Hall got an outside carry to the right side of the line. He put one incredible cut in space on a Falcon defensive back to make him miss. Not only that, Hall showed his special explosion, picking up speed and taking it to the house for 75-yards.

In the passing game, the connection between Flacco and Elijah Moore was on display throughout today’s work. The biggest play between the two on the day was during an early move-the-ball period. Off play action, Moore ran a post and broke to the corner, making an impressive catch on a bit of a low and under-thrown ball.

Similarly to Hall, Moore made a thrilling move in space himself. Working against the momentum of the pursuing defender, Moore exhibited his change of direction ability. Quickly planting his foot in the ground, Moore pulled off a fantastic juke leading to a big play for the Jets offense.

Those were not the only plays made by Hall and Moore throughout practice. In the passing game, Moore was busy. When competing against A.J. Terrell, one of the best cornerbacks in the NFL, Moore showed some awfully encouraging things. He was constantly making plays showing his ability to separate and his automatic hands on all three levels of the field.

Along with Moore and Hall, the Jets had nearly all of their skill players make a play at some point. Early in 7-on-7 work in the red zone, Garrett Wilson had some impressive moments. He punched two of his catches in the end zone. One was a quick-in underneath in which he showed his electrifying yards after the catch ability. Wilson broke back outside and finished with speed in the end zone.

Shortly after, working in the slot, he put a nice move on a Falcon defensive back while gaining ground, creating good separation on an out-breaking route. Wilson ended up making an impressive off-balance catch for his second score.

His last terrific catch was made in a move-the-ball period. With Flacco extending on the move out to his right, Wilson made an incredible sliding catch near the sideline.

At some point throughout practice, plays were made by Michael Carter, Corey Davis, Braxton Berrios, Tyler Conklin, and CJ Uzomah. Flacco did a great job efficiently moving the ball and spreading it around. He finished the practice going for 10-for-13.

Overall, it was a strong practice for the Jets’ offense. They showed the type of potential they have with infused skill talent. Hopefully, they continue to build on this work moving forward.