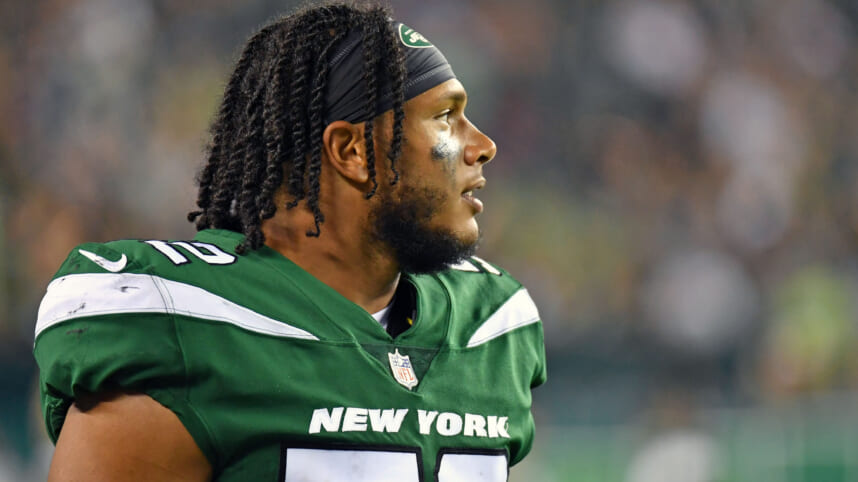 With all attention now turning to Week 7, New York Jets head coach Robert Saleh met with the media today prior to practice.

During his press conference, Saleh stated that rookie defensive end Jermaine Johnson would not practice today with his ankle injury. Johnson is reportedly getting a lot better, and Saleh shared that he is hopeful for a return next week. For this upcoming week against the Denver Broncos, though, Saleh said, “It doesn’t look like it. We’ll see unless something happens today and tomorrow, he’s probably not going to make it.”

While the Jets miss Johnson’s speed, size, and physicality as both a pass rusher and run stopper on the second defensive line group, the good thing is the Jets have a ton of depth. After edge starters Carl Lawson and John Franklin-Myers, the Jets have Bryce Huff, Micheal Clemons, Jacob Martin, and Vinny Curry, who returned last week.

In terms of rep shares, anticipate Huff remaining the key pass rusher to the Jets’ third down package. When the Jets rotate in their second-string defensive line, expect a mix of Clemons, Martin, and Curry at the two defensive end positions. Johnson primarily plays as the left edge defender in the second rotation.

Other updates on the injury front all look good for the Jets. Saleh reported that the only three others on the injury report were Duane Brown (shoulder), Quincy Williams (ankle), and Braxton Berrios (back). He said they would be limited today, but he is not worried about any of the three missing this Sunday’s game. While not mentioned on the injury report, Ashtyn Davis did show up (hamstring) as limited. Likely nothing to be too concerned about. More information will probably be provided tomorrow.