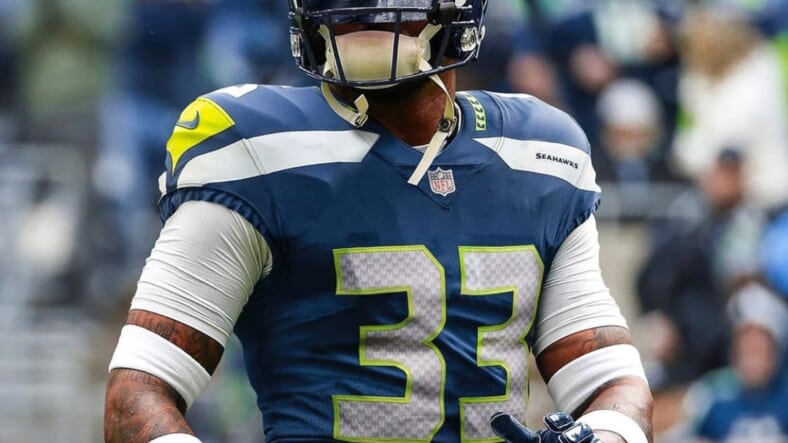 Jamal Adams’ methods of departure were unconventional, but one look at the current New York Jets shows that he had a point.

Looking back on the calamity that was 2020, it’s hard to believe that some noteworthy occurrences happenedÂ thisÂ year. Phenomena like the rebooted XFL, the tweaked NBA All-Star Game, and the world’s uncanny fascination with Netflix’sÂ Tiger King seem like they happened decades ago, but will forever be copyrighted with the insignia of 2020.

Surprisingly, it’s been less than a full calendar year since Adams donned the green, black, and white that the modern New York Jets’ uniforms carry. A wet, dreary contest against a Buffalo Bills team resting starters for the playoffs saw Adams register three tackles and a pass breakup in a 13-6 Jets win. Utterly forgettable by every sense of the football imagination, it stands as a gridiron landmark if only because that’s the last time the Jets have been on the right end of an NFL scoreboard.

At the time, few could envision that it would be the last dance for Adams (and Robby Anderson, but the Jets don’t play Carolina until 2021). Adams had avoided addressing the future but certainly implied there was one between him and the Jets by referring to the otherwise meaningless win as “the start of our next season”.

“It’s confidence carrying over into the off-season,” Adams said of the game, per Ethan Greenberg of NewYorkJets.com. “Everybody is going to be watching the playoffs and we’re going to have a bad taste in our mouths, but it’s just going to feed us.”

That meal, of course, never came. Apparently miffed at the lack of a long-term contract, Adams went to pretty much napalm every bridge he had left in New York, routinely calling out the organization’s failures since he joined the team as a first-round pick in 2017 and telling anyone who would listen that he wanted out unless a stable contract was presented. The Jets eventually struck a deal with the Seattle Seahawks, sending Adams over for Bradley McDougald and a pair of first-round choices.

But Adams’ true frustrations really seemed to stem from the Jets’ lack of on-field success. He was more than happy to join the Seahawks even when Seattle stressed patience in offering him the desired deal. The ongoing health crisis could’ve well played a role, but the optics made it seem like Adams was turning the Jets into a punchline one last time.

Even when the deal has done, neither side has truly seemed to have gotten over their breakup. A reunion awaits this weekend as the Jets descend upon Lumen Field on Sunday (4:05 p.m. ET, CBS), and the parting of ways remains fresh on each party’s mind. 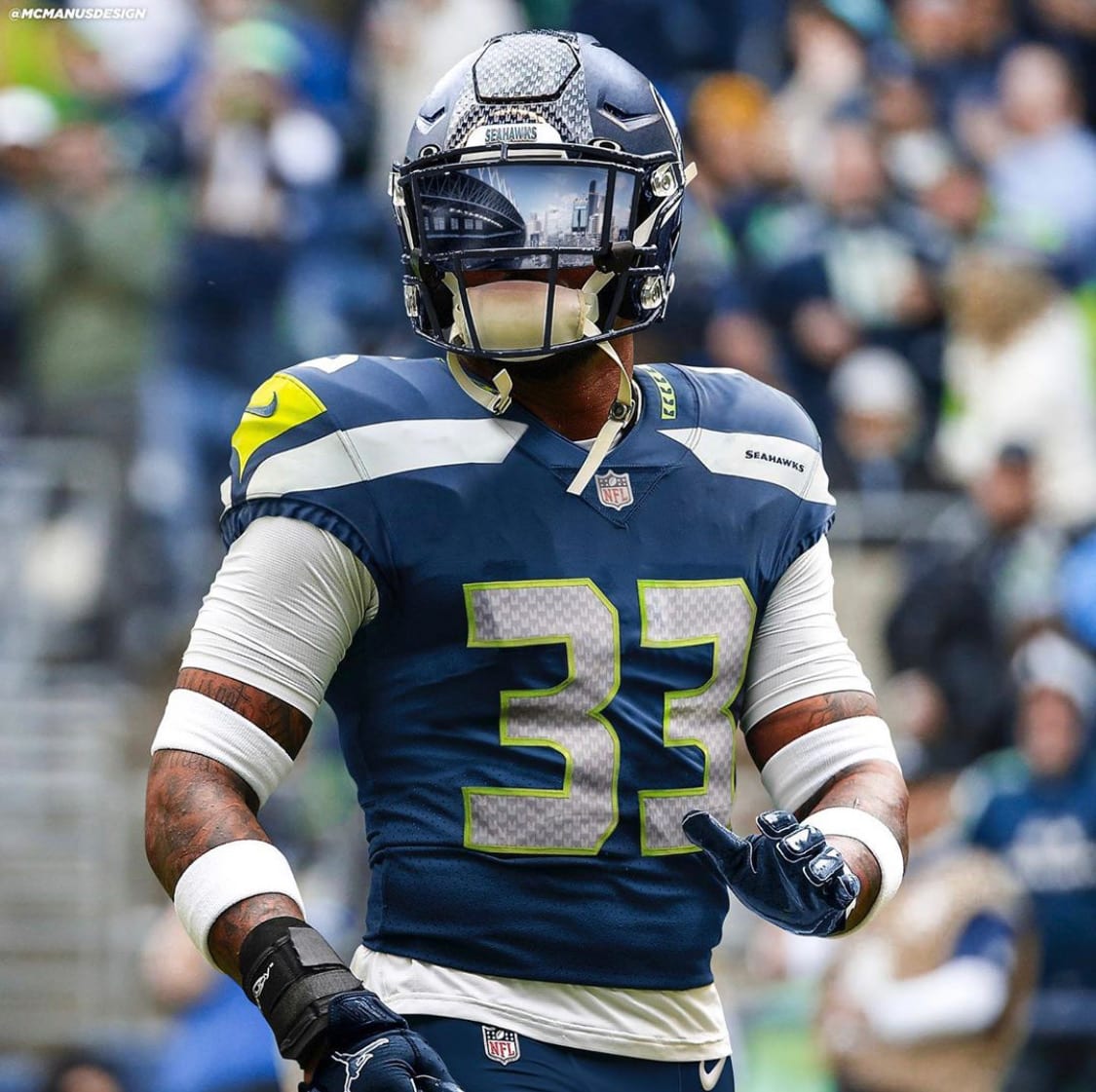 It was obvious that Adams’ get-together with his former comrades was going to come up during each side’s weekly availability. Head coach Adam Gase’s comments made headlines earlier this week when he was dumbfounded by the idea of animosity between him and the defender.

“I thought it was good, but obviously he felt different. I don’t know, I never had any poor interactions with him,” Gase said, per Jeff Kerr of CBS Sports. “he was somebody I talked to a lot and communicated with. Just kind of once the offseason hit, that’s kind of where…there’s nothing I can do, I’m not in charge of contracts. I’m not involved in those talks. That’s kind of where his agent and front office guys got to go to work.”

“I knew when we lost how much it hurt him, like I knew that. He’s a competitor, man. He has no interest in coming on the wrong end of the stick in the win-loss column. He feels like he sells out and gives everything he has, and he wants to win. I mean he wants to do everything he can to win.”

Adams spoke later in the week and offered a roller-coaster, maybe even contradictory, statement about his time in New York.

“The guys that make the decisions over there, they just didn’t value me like Seattle does and I appreciate that,” he said, per Brady Henderson of ESPN. “There’s no hard feelings towards them. They had different views. I had a different view, but at the end of the day, I’m just happy to be where I am and I have an organization that believes in me, believes I can get it done, and thinks highly of me. That’s all I can ask for, man. It’s just all about respect for me.”

The defender’s comments have been, and will continue to be, scrutinized to no end. But at this point, no rationally-minded football fan can deny that the last laugh belongs to Adams.

Adams or no Adams, 2020 was going to be a struggle for the modern Jets. Even with expanded playoff real estate, too many established served as roadblocks to the seven-team sweepstakes. But the team nonetheless looked at their future with a sense of immediacy. one look from the Jets’ offseason ledger should’ve told Adams that 2020 was not the time or place to think about a long-term deal. Debate can reign over whether that message was conveyed clearly, but Adams certainly didn’t believe it was, even as the Jets added free agents on a de facto audition-style basis. But what was done is done. There’s no use in looking at what feels like ancient history or analyzing the ins and outs of a deal that will only be complete by 2022 at the earliest.

The best move the Jets could’ve made in the deal’s aftermath was to wish Adams well and focus on their own affairs. Bygones could be bygones…let Adams worry about his past, let the focus be on the future. Alas, defensive coordinator Gregg Williams couldn’t get on board with that.

â€œJamal may get bored there because they donâ€™t use their safety-type things with all the complexities, maybe not showing what theyâ€™re doing as much as we do,â€ Williams said per ESPNâ€™sÂ Rich Cimini, taking a shot at Seattleâ€™s propensity for a Cover 3. â€œWeâ€™ll still do a lot of the same exact things, but weâ€™ll highlight the people we have here. As you saw what we did (last season), he had maybe his most productive year here because of how we highlighted the skill set he has.â€

In perhaps a bit of irony reserved for the darkest reaches of the popular sports-prognostication-gone-wrong account @OldTakesExposed, Williams is left to brood in boredom while Adams closes in on history.

Adams has served as the closest thing to a consistent silver lining that Seattle has had in an otherwise brutal year defensively in the secondary. Only lowly Jacksonville has let up more yardage through the air than the Seahawks (407.4 per game), whose roller-coaster season has reached a new valley with a loss to the Jets’ blue metropolitan counterparts last weekend. But Adams has carried on his propensity for backfield invasions. In only eight games, he has broken his career-best in sacks set last season in New York with 7.5…a half-takedown short of Adrian Wilson for the most by a defensive back in a single season. The fateful sack could well victimize Sam Darnold with both Greg Van Roten and Alex Lewis out on the offensive line and Denzel Mims missing from the receiving corps.

Such a happening would no doubt cause many to break out the “LOL Jets” memes and serve as another bumbling chapter in the Jets’ ongoing trek toward complete 16-game imperfection. It would go well beyond a simple sack, but, if it were to happen, could well personify and fulfill Adams’ most damning comments bestowed to his former green employers. 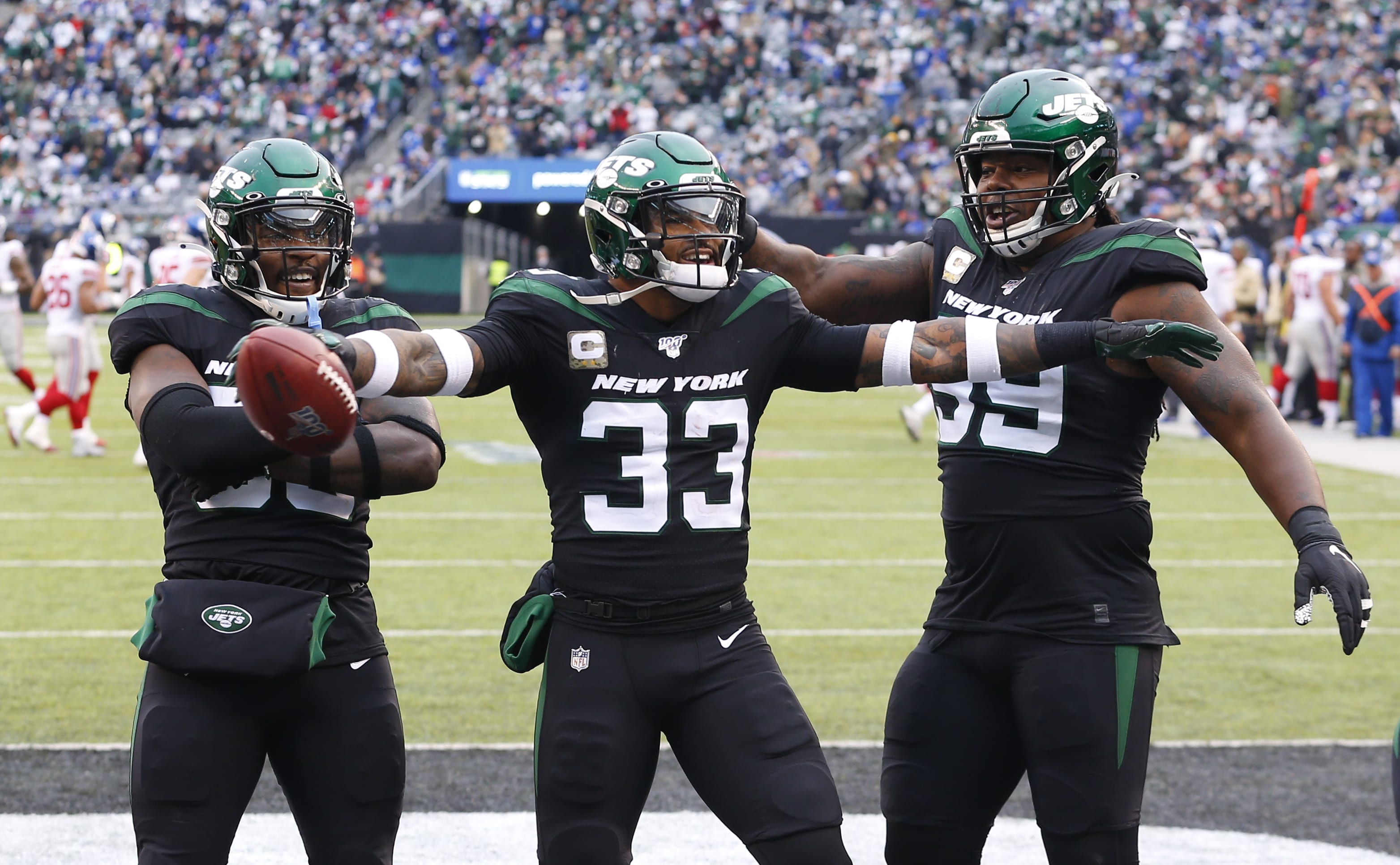 Adams sat down with Patrick Peterson and Bryant McFadden on the latter duo’sÂ All Things CoveredÂ podcast in November. In a discussion about his time and falling out with the Jets, Adams admitted he suffered from depression as the losses piled in New York. It was enough for Adams’ father George, himself a former first-round pick in New York (albeit for the Jets’ blue counterparts), to start encouraging Adams’ agent to start looking for greener pastures…ones that didn’t include “Jets” imprinted on his helmet.

“I fought depression in New York,” Adams said on the podcast. “I’m man enough to say it. I came home after a tough loss and just sat in my room in the dark. No phone, no TV. (My dad) hated to see me like that. It killed my pops so much.”

“Rebuild” became a dreaded buzzword. The aforementioned win over Buffalo was commemorated with a locker room celebration as it allowed the Jets to finish 7-9…unacceptable elsewhere, but a cause for jubilation in New York, which had reached such a summit for only the second time over the last six full seasons.

Admas’ biggest takeaway? “They do not want to win”.

“Money’s a plus, but I love the game of football,” Adams said. “I love what I do … I was sick of hearing ‘the rebuild year’,” Adams continued. “I was bringing the juice back to the Jets,” Adams said. “I simply told them, ‘Hey man, if you guys want to keep me here to be a Jet for life, let’s sit down and talk. This is after the fact they told me, ‘We wanna offer you an extension. I felt like I was being disrespected.”

“Let’s be honest, the Jets were the laughingstock. (Seattle) is how the NFL is supposed to be. This is the dream I was dreaming.”

Williams’ ousting is the latest move of an ongoing purge that should continue well into the Jets’ offseason. Among those who went before him were Adams’ fellow defensive starters like Avery Williams, Steve McLendon, and Pierre Desir. Le’Veon Bell was cast away from the offense through an outright release months after little, if any, attempt was made to keep Anderson, who’s now a beacon in the Carolina’s more organized rebuild. All the while, Gase, who has had to snuff out rumors of in-fighting between him, Adams, and Bell, continues to oversee the operation, somehow inching his way closer to the upper half of the league’s longest-tenured coaches. His ousting could well come after yet another meaningless Week 17 game, this one coming in Foxboro against the Patriots on January 3. But considering all the names the Jets have given up on before they gave up on Gase, his firing feels anything but certain.

Does that sound like a team that wants to win?

Seattle winning the early portions of this trade was likely to be expected. McDougald, who spent a majority of this season injured, is the only piece of the Adams trade with a name so far, as the Jets are set to choose twice in each of the next two opening draft rounds after acquiring Seattle’s picks. Adams was the perfect piece for a team on the cusp of the Super Bowl to add, and he’s doing what he can to help his new cause. In Seattle, seven wins is a step, not a destination.

But, through their play, the Jets are proving Adams right, almost writing their own warning for any big-name talent that want to join their cause through free agency or the draft.

The Jets’ first step in yet another reset must be to prove Adams wrong. That, more than likely, won’t involve victories in the early going. If the heartbreak against Las Vegas from last weekend proved anything, it’s that the Jets really couldn’t care in the slightest about the concept of tanking. If anything, they should continue to use these final four weeks to build any positives and complete their offseason shopping list for yet another reset.

If it proves Adams wrong in the process…well, they’ll take any kind of victory they can get at this point.