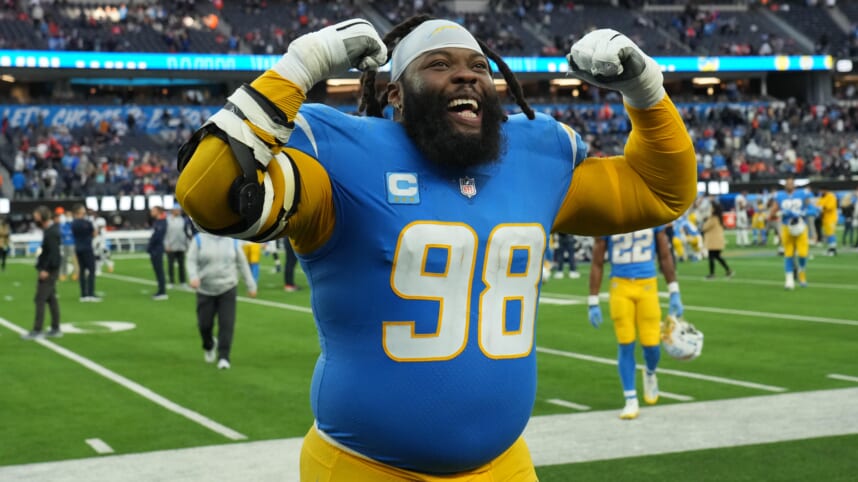 It was just reported on by Mike Garafolo of NFL Network that the New York Jets hosted defensive tackle Linval Joseph on a visit today.

He has loads of experience over his career, having played in 171 games. Since 2011, he played in at least 12 games every year. Joseph has recorded 25 sacks, 56 tackles for loss, and 644 total tackles throughout his 12 years.

Joseph started his career in 2010 with the New York Giants as a second-round pick. He spent four years with the Giants before signing with the Minnesota Vikings in 2014 on a big five-year contract. The Vikings re-upped his deal in 2017. Joseph ended up spending six years with the Vikings. Finally, he signed a two-year contract with the Los Angeles Chargers in 2020, where he played the last two years.

Why Linval Joseph makes sense for the New York Jets:

Joseph would add reliable depth to the second defensive line group of the Jets. Robert Saleh and Jeff Ulbrich love to rotate the front. Unfortunately, the second group of defensive tackles, Solomon Thomas and Nathan Shepherd, have not given the Jets enough impact plays.

Shepherd would, in all likelihood, be the one they let go of. To sign someone like Joseph to backup one of the best defensive tackle duos in football with Quinnen Williams and Sheldon Rankins would be very exciting. Lastly, Joseph makes sense for the Jets because he is likely wanting to simply win at this late point in his career. The 4-2 Jets are looking to keep it going, and adding Joseph could very well help that.