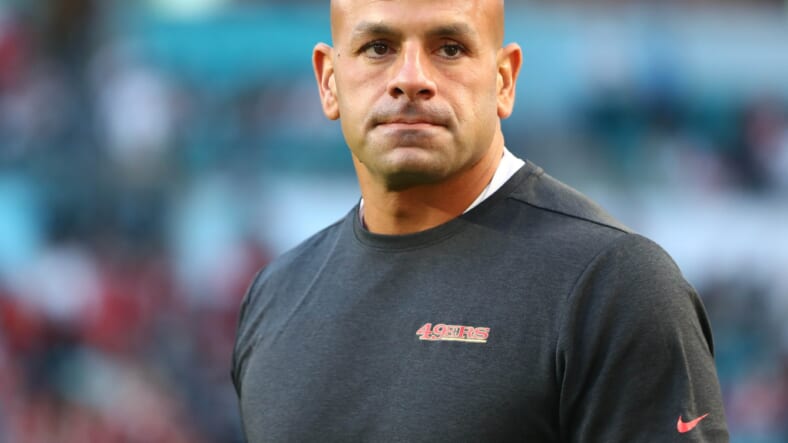 Coach at the Garden!!

As the new head coach of the New York Jets, one of the first things Robert Saleh needs to learn is how to end a long drought of home playoff games. It’s been over 18 years since his new employers hosted an NFL postseason contest, the game in question coming in the AFC Wild Card round against Indianapolis at the late Giants Stadium.

Saleh did some de facto research on Wednesday night, taking in the New York Knicks’ playoff matchup against the Atlanta Hawks at Madison Square Garden. Game 2 of the NBA’s Eastern Conference quarterfinal series was just the second postseason game the Knicks had hosted since 2013. The new football boss was spotlighted on MSG’s video board during the first half and received a warm ovation.

It would appear that the Knicks remembered Saleh’s mantra of “All Gas, No Brake” during second half action on Wednesday. Trailing by 13 at the midway point, the Knicks erased Atlanta’s early lead and earned a 101-92 victory to even the first-round series at one win apiece. Derrick Rose led the way with 26 points off the bench for the Knicks, who are seeded four in the Eastern Conference playoff bracket.

Just getting home from MSG. What an incredible New York evening. Pic of the night?@nyjets HC Robert Saleh, cheering on the @obitoppin1 slam. @gmfb @nflnetwork

IMAGINE THINKING THE KNICKS WERE GONNA LOSE WITH THIS MAN IN THE BUILDING. ALL PRAISE TO THE MOST HIGH. KNICKS ARE BACK. https://t.co/mNZActEeTr

Imagine someone telling you a year ago that #Jets head coach Robert Saleh would be in Madison Square Garden cheering on the #Knicks in a playoff game. Exciting time for New York sports pic.twitter.com/9Zlt1xyrgo

Saleh will have his own experiences against an Atlanta-based squad with an ornithological nickname later this fall, as his Jets will battle the Falcons in London on October 10.

After Wednesday’s euphoric events at MSG, the Knicks-Hawks series now shifts to Atlanta, with Game 3 in the best-of-seven set slated for Friday night (7 p.m. ET, MSG/ESPN).

Postseason visits from Jets representatives have appeared to bring good luck to the competing metropolitan squads. Over the weekend, members of the Jets’ revamped offense descended upon Nassau Veterans Memorial Coliseum for the New York Islanders’ Stanley Cup Playoff triumph over the Pittsburgh Penguins. The Islanders eliminated the Penguins on Wednesday night and will face the Boston Bruins in the second round of the NHL postseason.