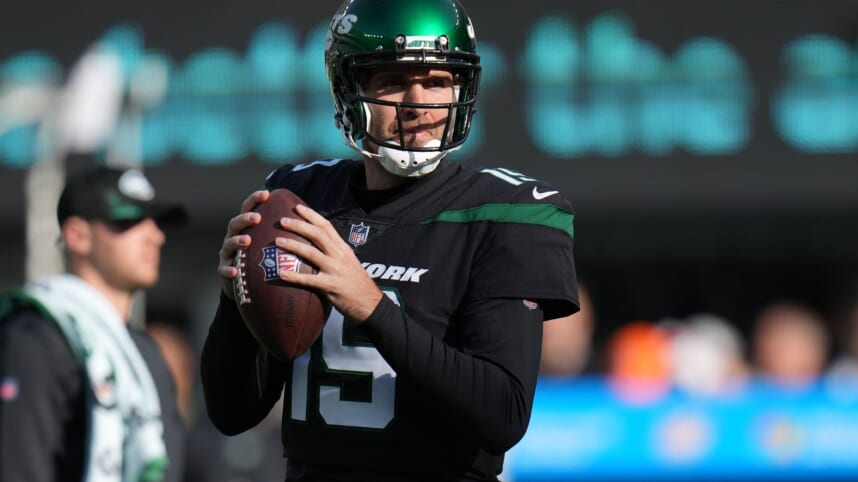 For the second day in a row, the New York Jets put some impressive things together in practice with the Atlanta Falcons. Although it is just practice, the success should be noteworthy.

Prior to this year, the last three times the Jets have had joint practices, they had clearly been the worst team on the field. Each of those years, they went on to win just four games.

Last year, in Green Bay, the Jets reportedly had many struggles. The Jets also worked with the Eagles last summer and did not finish as the better team. In 2018 with Washington, the Jets were also the worse of the two teams on the field each day of practice.

The Falcons are likely in for a long year. They are in the early phases of a complete rebuild. Nonetheless, the fact that the Jets took it to them on both sides of the football in the two days of practice is encouraging as they look to take the next step.

For the second consecutive day, Joe Flacco led the Jets’ offense well. Starting up front, the Jets’ offensive line gave Flacco the time and pocket needed to be efficient. From there, Flacco made good decisions, got the ball out on time, and spread it around to the Jets’ exciting, new-look skill talent at running back, wide receiver, and tight end.

Between 7-on-7 and 11-on-11 periods, the Jets once again had nearly all of their skill position players make a play at some point.

Starting in the backfield, the young one-two punch of Breece Hall and Michael Carter continues to brew optimism. Carter caught a two-point conversion early on in the day on a flat route. Hall made yet another impressive catch in the first few plays of 7-on-7 work. Operating from the slot running a downfield route, Hall made a terrific back-shoulder grab.

Hall also made his impact on the ground with a splash run. He displayed his patience and vision, finding the right hole. Then, Hall quickly planted his foot in the ground before cutting back inside and upfield. After his one-cut, Hall showed his special ability to explode and run up to his fast 4.39 speed.

In the passing game, Elijah Moore, Garrett Wilson, Corey Davis, and Tyler Conklin all made nice plays throughout the day.

Davis and Wilson had two spectacular catches in the same area of the field. In the early going of 11-on-11, Flacco let one rip to Davis downfield. Working near the sideline on an out-breaking pattern, Davis stuck out one hand and made an exceptional catch for a touchdown. The strong summer for Davis continued in yesterday’s work.

Wilson connected with Mike White a few times on the day. His most exciting catch from Saturday was one in which he caught just out of bounds. However, on the play, Wilson displayed what makes him so special. On a go route, he gained a step on the corner in 1-on-1, located the ball in the air downfield, and ultimately got the hang time needed with his vertical ability and high-pointed the football.

Wilson showed that he can help the Jets finish drives in red zone periods. In 7-on-7 red zone work, Wilson hauled in one touchdown from White, working across the back of the end zone.

In 11-on-11 work, on an extended play, Wilson did a great job working with Flacco finding space in the back of the end zone. He made a terrific concentration grab that was ruled incomplete but could have been ruled a touchdown.

Moore made a thrilling connection with Flacco for one touchdown in a red zone period. Working against A.J. Terrell, Moore showed his ability to separate with speed operating across the field to the back corner of the end zone. Flacco placed beautiful touch on the ball locating it in the perfect place.

In 7-on-7 in the red zone, Flacco made one tight-window throw to Conklin over the middle near the back of the end zone. Conklin displayed his reliable hands while extending to make a tough grab in traffic.

On a day in which the Jets gave rest to Quinnen Williams and Carl Lawson, the Falcons’ offense was still not able to generate much. It came as a result of the Jets’ dominance in the trenches. Headlined by key starters in John Franklin-Myers and Jermaine Johnson, the Jets were constantly creating pressure, leading to short drives for the Falcons.

Along with Johnson, the Jets’ other defensive first-rounder, Sauce Gardner, continues to thrive in camp. At times, Gardner was matched up with Falcons star Kyle Pitts and held his own.

It is promising to see the Jets show some progress. Hopefully, it continues into tomorrow night’s preseason game at MetLife Stadium.