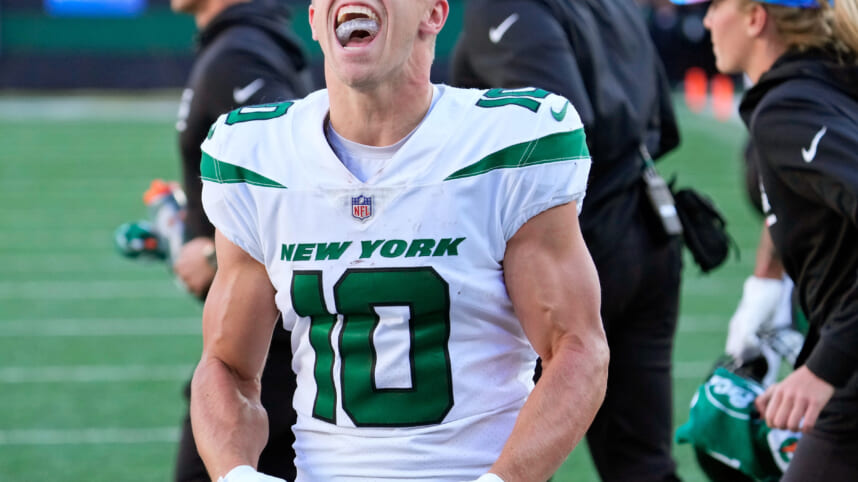 The New York Jets just put up a 40 burger and are 3-2. While this one against a banged-up Miami Dolphins team was way too close for comfort (19-17 Jets well into the fourth), the Jets stuck with it and absolutely broke things open in the final 10 minutes. The potential sign of an improving football team.

The top five stars of this one for the Jets were Breece Hall, Quinnen Williams, John Franklin-Myers, Carl Lawson, and Sauce Gardner.

Mike LaFleur put this game on the shoulders of Hall, and he carried the load. Hall had two targets, both of them catches for 100 yards, the first one going for 79. On the ground, Hall had 18 carries for 97 yards (5.4 per carry) and a touchdown. In total, 197 yards from scrimmage for Hall in the Jets’ Week 5 win. He is a special talent who continues to make a remarkable, immediate impact leading the Jets’ offense.

The pass rush of the Jets was fairly dominant. Ironically, it started with Gardner, who got the Jets going with a safety on the defense’s first play of the game. Gardner, from there, got a key interception in the second quarter, the first of his career. He also recorded a pass breakup in this one. Gardner, along with Hall, are already proving themselves as Rookie of the Year caliber.

Continuing with the pass rush, the Jets finished with a whopping 16 quarterback hits in this win. Lawson picked up a grand total of seven, Franklin-Myers had five, and Williams recorded two. In terms of sacks, Williams and Franklin-Myers split one, and Lawson had one that led to a forced fumble that Williams scooped up and ran for a few. At that point, the Jets had taken full control of this game.

Concluding here with Zach Wilson, overall, it was a good day for the 23-year-old signal-caller. He finished 14-of-21 for 210 yards and no interceptions, giving him a rating of 99.3. Wilson picked up a touchdown on the ground. His accuracy looked better and, for the most part, was consistent. Arguably, the most important thing to note, Wilson kept mistakes at a minimum, throwing the ball away and not putting it in harms way at any point in this game. The Jets did not have a turnover in this win.