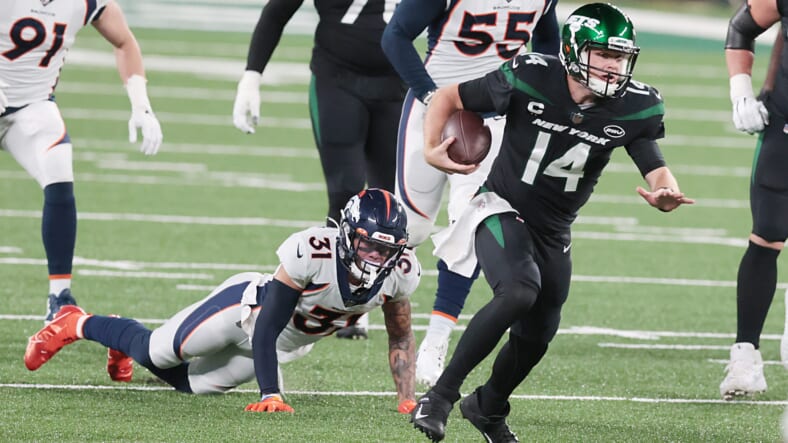 At 0-4 and both the head coach and franchise quarterback on the hot seat, the New York Jets have little to celebrate, but not all is dreary.

Autumn in New York, as Billie Holiday originally sang, is “often mingled with pain”. That appears to be the case in New Jersey as well, at least on the gridiron.

We’re a quarter of the way through the 2020 NFL season, and the New York Jets sit at 0-4 at the quarter mark. As lifeless as the Jets have looked…the fact that their average margin of defeat is “only” 14 points might count as a proverbial win…things might get progressively worse. In addition to a Sunday matchup against the Arizona Cardinals (1 p.m. ET, Fox), the next few weeks feature get-togethers against upstart teams (LA Chargers), playoff contenders (Buffalo, New England), and even the defending, red-hot Super Bowl champions (Kansas City).

Yet, if one looks closely at the 2020 Jets…and you could hardly be blamed for keeping your (social) distance…they can glean some specific positives that should have fans excited for the rest of this season…and potentially beyond.

It feels like ten different networks broadcast the NFL Draft these days…Disney XD simulcasted the most recent Pro Bowl, so maybe they’re next into the fold…but all of them seem to unite around the common theme of lampooning the Jets’ first-round choices. Even the ones they hit are subject to satire, as producers gleefully share footage of Matt Leinart-adoring fans booing the Jets’ selection of Mekhi Becton.

Lately, the Jets have provided fodder for those segments. Darnold and Quinnen Williams could well be on their way to first-round infamy. Their day one brothers Leonard Williams and Jamal Adams have already been sent elsewhere via trades. But, so far, Mekhi Becton is blocking those detractors, literally and figuratively.

Becton is turning into a cornerstone on the much-maligned, perpetually rebuilding offensive line. Because the Jets aren’t allowed to have nice things, injuries and controversy have already snuck into his career…namely over whether Becton should’ve been used in Thursday’s loss to Denver after suffering a shoulder ailment four days prior in Indianapolis…but the early on-field returns are promising. Through the first two weeks, Pro Football Focus had Becton as the best-graded offensive rookie amongst all positions. Even at half-strength against the Broncos, Becton managed to look strong, vindicating the Jets’ decision to pass on several high-profile receivers to take him 11th overall last spring. A lot of questions pepper the Jets’ future. If things hold up, Becton’s spot on the blind side of the quarterback, be it Darnold or otherwise, won’t be one of them.

Crowder had established him as a serviceable slot option over four seasons in Washington. In New York, he’s been a consistent bright spot over the past two difficult seasons. Last season, Crowder led the Jets in all major receiving categories. He’s only appeared in two games this season, but he seems well on his way to repeating the feat. The century mark in yardage has been broken in each of his two games thus far, and he’s also responsible for the longest play of the Jets’ season, a 69-yard scoring hookup with Darnold in the Week 1 visit to Buffalo.

A good portion of this modern Jets rebuild is focusing on young players etching a role for themselves in the future. But the 27-year-old Crowder is transforming himself into the reliable veteran role player prescience that championship teams crave. It’s a role comparable to, say, Sammy Watkins in Kansas City. In his second year on the team, Crowder might as well be an established New York veteran at this point. A potential free agent after this season (he signed for three years, but has a potential out at $1 million in dead cap), Crowder has turned himself into one of the players allowed to stick around for the potential glory days ahead.

Enough has been written about whether Darnold is still the Jets’ franchise man under center. There are 13 weeks, including a bye, left in this dreary season, so we certainly can’t promise that you won’t see any more articles about the concept.

But one thing that has changed for the better when it comes to Darnold is his mobility. We saw brief flashes of it toward the end of last season…that rollout touchdown to Crowder against Baltimore comes to mind…but Darnold has earned satirical comparisons to Lamar Jackson in the way he’s improved this year.

Thursday night brought this concept to the forefront when Darnold earned a career-best 63 rushing yards, 46 of which came on a long touchdown run on New York’s opening drive. We’ve seen Darnold extend plays by escaping onslaughts f the pocket and finding Braxton Berrios for scores.

Time will tell if Darnold remains under center for 2021 and beyond…heck, an injury sustained in the Denver game has his status for Arizona in question. But his developed mobile talents certainly make a case for his sticking around.

Coaches have come and gone since his arrival in 2016, but special teams coordinator Brant Boyer has made himself eternal. One look at his modern unit shows why.

The Jets’ special teams had to be on their game even before 2020 unleashed their scary surprises. With an offense struggling to find itself and a defense missing two of its top representatives, it would crucial for returns to set up good field position and punts to make things difficult for the offense. Field goals could help a meandering offense end drives on a positive note.

So far, the components have thrived in their respective roles. Sixth-round pick Braden Mann’s punting numbers aren’t lighting up the rest of the league, but he’s become a reliable name on the Jets’ roster while slowly getting things together on the NFL level. He earned a season-best 48.7 yards per boot on Thursday and even made a touchdown-saving tackle in the second half. Josh Malone is averaging 20 yards a return, seventh-best in the AFC. Most importantly, Sam Ficken, 30th in three-point conversion rate last season, has been literally flawless in the early going. He’s one of eight kickers to hit all of his attempts (8-for-8). Of that tally, only Jason Sanders in Miami has hit more (9). If the Jets do what most fans expect and fire Gase, Boyer would make for an intriguing and well-deserved interim boss.