New York Jets DT Sheldon Rankins out 4-6 weeks: 3 ways the Jets can go about replacing him 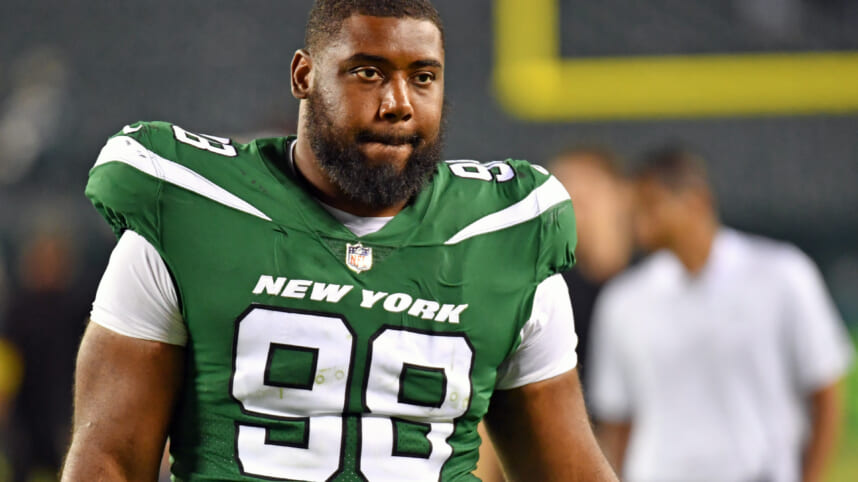 Unfortunately, for Rankins and the Jets, the news is not great. Rankins, who had to leave yesterday’s game with an elbow injury, reportedly dislocated it and will be out 4-6 weeks.

This is a big loss to the Jets’ seventh-ranked defense. Against both the pass and the run, Rankins has been key to the interior of the Jets front all throughout 2022. To this point, Rankins has recorded two sacks, three tackles for loss, four quarterback hits, and a forced fumble.

How will the New York Jets go about the loss of Sheldon Rankins?

There are a few ways the Jets could fill Rankins’ key role.

It is well-documented how much the Jets rotate their defensive line. Every game, they need at least four defensive tackles to do so. Without Rankins, the Jets are now down to three with Quinnen Williams, Solomon Thomas, and Nathan Shepherd.

The Jets’ most versatile defensive lineman is John Franklin-Myers. He has bounced back and forth between the left defensive end and defensive tackle position a lot more this year than last. His inside reps primarily come against the pass.

Franklin-Myers played inside for the Jets in 2020. With the loss of Rankins, the Jets could potentially just look to move Franklin-Myers to defensive tackle for the next month. Especially considering all of their edge depth with Carl Lawson, Jermaine Johnson, Bryce Huff, Micheal Clemons, and Vinny Curry.

A few weeks ago, the Jets had Linval Joseph in on a visit. Knowing that the depth at defensive tackle can improve from Thomas and Shepherd, it makes sense as to why the Jets were intrigued by Joseph.

The long-time veteran adds a ton of size to help on the interior, along with a respected pedigree over many years in the league. It will be fascinating to see if the Jets look to bring in Joseph or another veteran defensive tackle to fill the void.

This summer, during training camp and the preseason, the Jets did have a competitive roster battle at the defensive tackle position. Jonathan Marshall and Tanzel Smart both just missed the final cut and landed on the practice squad. Perhaps, the Jets just look to keep things in-house and elevate of one them to the active gameday roster for the next few weeks.

Marshall was a 2021 sixth-round draft pick with generational athletic ability. Smart had impressive moments in both the 2021 and 2022 preseason. He spent all of last year and all of this year with the Jets on the practice squad. It will be interesting to see if the Jets have that much confidence in either Marshall or Smart to put them on the 53-man roster.