New York Jets: Denzel Mims is making the most of his opportunity 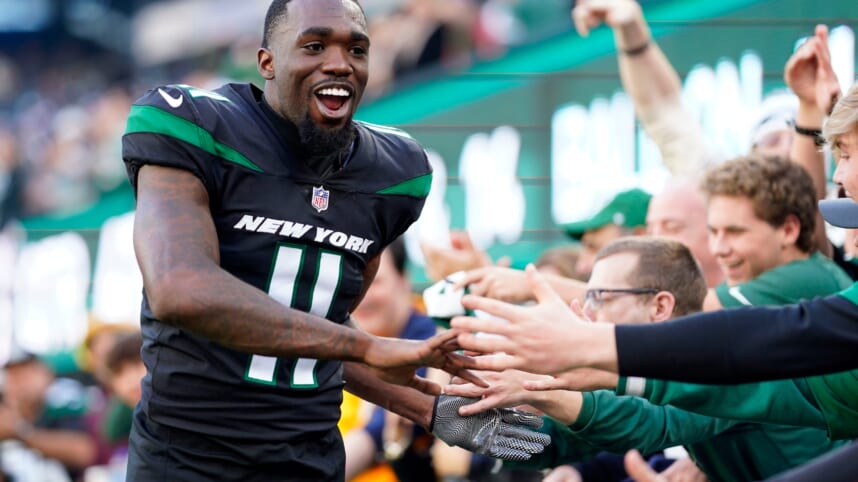 New York Jets wide receiver Denzel Mims (11) celebrates with fans after the game. The Jets defeat the Bengals, 34-31, at MetLife Stadium on Sunday, Oct. 31, 2021, in East Rutherford. Nyj Vs Cin

One of the New York Jets’ most polarizing players over the last two years now is young wide receiver, Denzel Mims.

He was drafted by the team in the second round of the 2020 draft and had an encouraging rookie year. The wide receiver, gifted with size physically and speed athletically, always had promising upside.

However, things changed for him when the Jets hired a whole new coaching staff in 2021. When Robert Saleh and Mike LaFleur came in, it appeared as if things did not click between them and Mims early on. He went on to play the year as a reserve, totaling just 279 snaps, and seemingly never having much confidence as mentally he made mistakes time and time again. Mims’ 2021 season was a complete washout.

This offseason, though, Mims seemed to approach things with a great mindset, eager to win everyone back over. Joe Douglas, Saleh, and LaFleur all had great things to say whenever they were asked about Mims. That being said, Mims’ role come training camp, and the preseason remained minimal.

A trade was requested, and following an awesome final preseason game, Mims’ future status with the Jets looked to be up in the air. Douglas ended up holding on to the receiver though, as proper value was not offered by a team. It looked as if Mims was destined for another year of having a slim role.

The Jets have recently had some starting wide receivers miss time between an injury to Corey Davis and Elijah Moore’s frustrations. In turn, it has led to the best opportunity Mims has had since Saleh and LaFleur came to the Jets. And with that opportunity, Mims has undoubtedly made the most of it.

His first game being active was in Week 7 against the Denver Broncos. While Mims only had one catch for four yards on a screen, he made his impact noticeable on a big touchdown run Breece Hall scored. Mims, well-known for his run blocking, used his size and physicality to deliver a striking blow, helping Hall up on the second level (out wide in the bunch).

The Jets coaches, Saleh and LaFleur, took notice of it as they mentioned the contribution while speaking with the media last week.

In the second game Mims played, he gave the Jets a two-catch, 76-yard game highlighted by a big 63-yard reception in which he proved his big-play threat ability.

Come this week’s trade deadline, to no surprise, Mims was not dealt. Reports actually surfaced that the Jets would like to keep integrating Mims within their offense week-to-week.

Coach Saleh met with reporters this morning prior to the final practice of the week in preparation for the Bills. He made it known that Corey Davis will once again be out for this week. It leads to more playing time for Mims, who Saleh was asked about and spoke highly on.

“You know, his attitude’s been awesome. Feel like three weeks ago, something flipped, just his daily approach, coachability, all of it has just really amplified for him… Really like where he is mentally, like his mindset. So hopefully, he continues to grow.”

Even when Davis returns, Saleh stated that Mims can still maintain his role. “Absolutely… He did a nice job last week, and he has another opportunity to do it again this week.”

It is fair to say that after a frustrating year-and-a-half for Mims, the 25-year-old has potentially won over the coaches with his mindset, work ethic, rising up to challenges and, from there, just allowing his physical and athletic talent to take over.

Mims is a gifted football player and still very young. Hopefully, his confidence simply continues to grow. If so, he will continue to have playing time and a chance to prove himself as a potential core piece to the Jets’ offense.