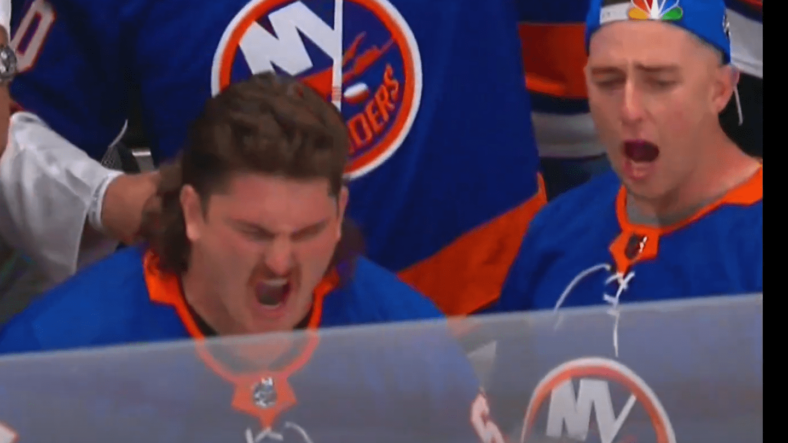 The game day antics of the newly minted New York Jets blocker during the Islanders’ playoff run will now move toward a good cause.

If the New York Islanders’ ongoing playoff run ends with a hoist of the Stanley Cup, the team may have to put Dan Feeney’s No. 67 sweater in rafters at UBS Arena next season.

Feeney, signed by the New York Jets as an offensive line free agent, has gone viral for his raucous celebrations of Islander goals. He and his new offensive teammates have been frequent guests at Nassau Coliseum as the Islanders sit nine wins away from their fifth championship.

Feeney’s fandom has hit a new, charitable level as the Islanders attempt to close out their quarterfinal matchup against the Boston Bruins tonight in Uniondale (7:30 p.m. ET, NBCSN). The former Los Angeles Charger has teamed with Isles Lab, an NYI fansite and store, to sell t-shirts bearing Feeney’s likeness from a minimalist view. Bearing the Islanders’ circular logo on the back, Feeney’s mullet and mustache are prominently displayed. New York holds a 3-2 lead in the best-of-seven series after a 5-4 win on Monday in Boston.

The description for the shirt makes sure to note that a “can of refreshing beverage (is) not included”, referencing Feeney’s propensity to down his beer in ecstasy after New York goals. It also unites the scoring celebrations for both the Jets and Islanders, declaring “Yes! Yes! Yes! Jets! Jets! Jets!”.

At Feeney’s request, proceeds from the shirt will benefit the National Multiple Sclerosis Society, a New York City-based non-profit. Feeney has previously supported the organization through the NFL’s “My Cleats, My Cause” movement.

Feeney, a third-round pick of the Chargers in 2017, has mostly been used as a depth option but has gained a strong reputation for his lively personality, one only bolstered by his now-iconic appearance. He is expected to compete for one of the primary roles on the interior of the Jets’ offensive line.

The winner of the Islanders-Bruins series will take on the defending Stanley Cup champion Tampa Bay Lightning for a berth in the final round. Tampa Bay previously ousted the Islanders in six games in the semifinal round en route to their second Cup triumph in the Edmonton bubble last fall.