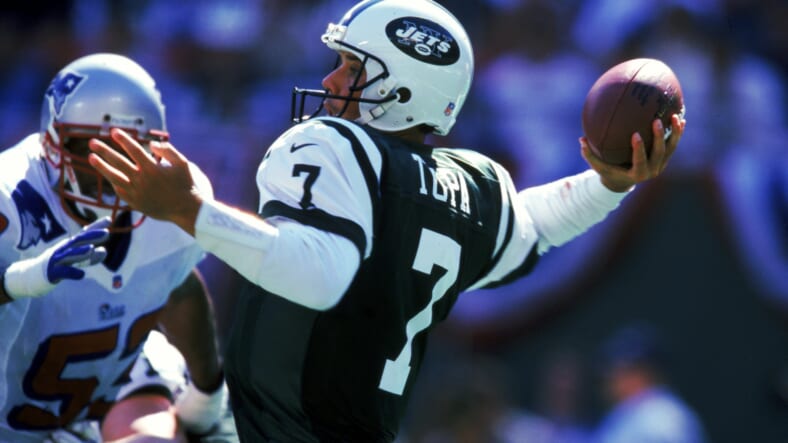 12 Sep 1999: Tom Tupa #7 of the New York Jets passes the ball during the game against the New England Patriots at the Giant Stadium in East Rutherford, New Jersey. The Patriots defeated the Jets 30-28. Mandatory Credit: Ezra O. Shaw /Allsport

To commemorate the path to the draft, ESM looks back on the greatest picks chosen in their respective positions. We continue with 68th pick, one acquired from the Leonard Williams proceedings…

After a three-year absence, the two-time Del Rio is back in the NFL as the defensive coordinator of the Washington Redskins. He got his start as a player as a third-round pick of the Saints. Del Rio had a roller-coaster career as a play, including a bizarre incident where he assaulted former Chiefs receiver and scout Otis Taylor during the 1987 players’ strike. He had mistaken Taylor for a replacement player in a matter that was settled out of court. Del Rio would later reach the Pro Bowl as a member of the Minnesota Vikings.

Tupa entered the league as a quarterback, but instead went on to become one of its most reliable punters. He would make history as a 1994 Cleveland Brown by converting the first two-point conversion in NFL history on a botched extra point. In 1999, Tupa earned a special place in Jets lore. During their Week 1 tilt against New England, Tupa, designated an emergency quarterback, stepped in when Vinny Testaverde went down with an injury. In his first pass since 1999, Tupa found Keyshawn Johnson for a 25-yard touchdown. He’d later hook up with Fred Baxter for a seven-yard score in the second half to cap off one of the best backup quarterback performances in Jets history. That season ended with Tupa earned All-Pro honors…as a punter.

The pick used to select Reed was part of Minnesota’s haul from the historically massive Hershel Walker trade. His career got off to a slow start, but he would go on to post four consecutive seasons of earning at least 1,000 yards. Cris Carter duplicated the feat, and the pair became the NFL’s first teammates to amass that tally over four straight years. Locals around these parts perhaps best know Reed for the touchdown that played a part in the Vikings’ come-from-behind victory in the 1997 NFC wild card playoffs.

The versatile Compton played all over the offensive line and even served as the Lions’ long snapper for field goals. Years of blocking for Barry Sanders on mediocre teams finally paid off when he joined the New England Patriots in 2001. He would play on the starting offensive line for the Patriots’ original Super Bowl squad. Compton currently serves as the offensive line coach at Virginia-Wise at the Division II level.

The Jets are looking for some defensive depth in this draft. They would certainly be satisfied if they could someone with half of the caliber of Briggs. Not only did he develop a reputation as a hard-hitting, fundamentally sound linebacker, but he was durable to the tune of missing only four games over his first ten seasons. Briggs currently ranks second in the Bears’ lengthy history in defensive touchdowns and is also third in pass defenses (84). He also notably led both sides in tackles in Chicago’s Super Bowl visit in 2007.