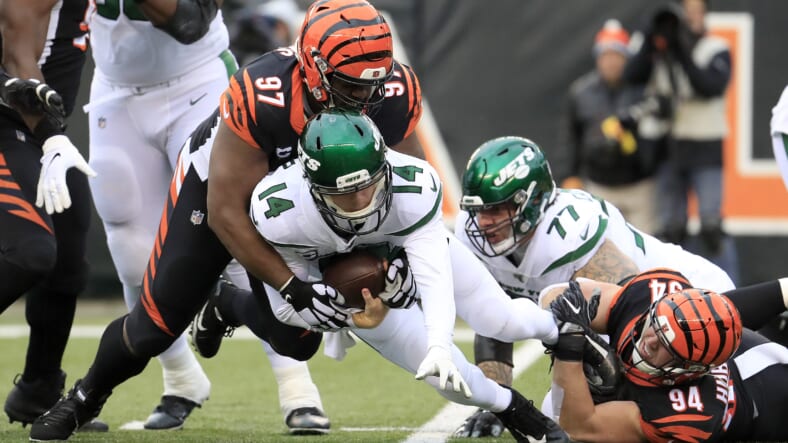 CINCINNATI, OHIO – DECEMBER 01: Sam Darnold #14 of the New York jets is sacked by Geno Atkins #97 and Sam Hubbard #94 of the Cincinnati Bengals at Paul Brown Stadium on December 01, 2019 in Cincinnati, Ohio. (Photo by Andy Lyons/Getty Images)

To commemorate the path to the draft, ESM counts down the greatest picks chosen in their respective positions. We carry on with the 120th choice, which is currently slated as the Jetsâ€™ final pick in the proceedingsâ€¦

Edwards was drafted not from college, but from the CFL. His exploits may have been overshadowed by the antics of Pittsburgh’s Steel Curtain and downplayed by the sack’s lack of recognition as a stat. He nonetheless went on to become a fearsome pass rusher over an 11-year career that also took him to Cleveland, Buffalo, and Green Bay.

Jackson literally made an immediate impression on New York football. In his first NFL game, a Giants visit to Tampa Bay, Jackson took back a Doug Williams interception back for a touchdown in a 19-13 win on opening weekend. Jackson, in fact, earned an interception in each of his first four games en route to seven in his rookie campaign. He ended an eight-season career with a total of 28 interceptions.

In the dark days of the Rich Kotite era, Murrell was one of the Jets’ rare bright spots. While East Rutherford burned to the flames of a 1-15 record, Murrell finished with a career-best 1,249 rushing yards, good for seventh in the league. Immediately behind him were Emmitt Smith and his eventual successor Curtis Martin. Murrell would again reach four digits under Bill Parcells’ watch in 1997 before heading west to Arizona.

Samuel is perhaps best known for his historic drop on the New York Giants’ final drive of Super Bowl XLII, but that’s doing the four-time Pro Bowler a great disservice. Two other Super Bowl rings do reside on his fingers and he has scored four touchdowns in the postseason. He also led the league in interceptions twice, most recently in 2009 with Philadelphia.

Things have been par for the grim course in Cincinnati, but Atkins has been one of the rare consistently silver linings. The Georgia alum has already established himself as one of the most illustrious players in Bengals history. His dominant decade was commemorated with an invitation to the All-Decade team.