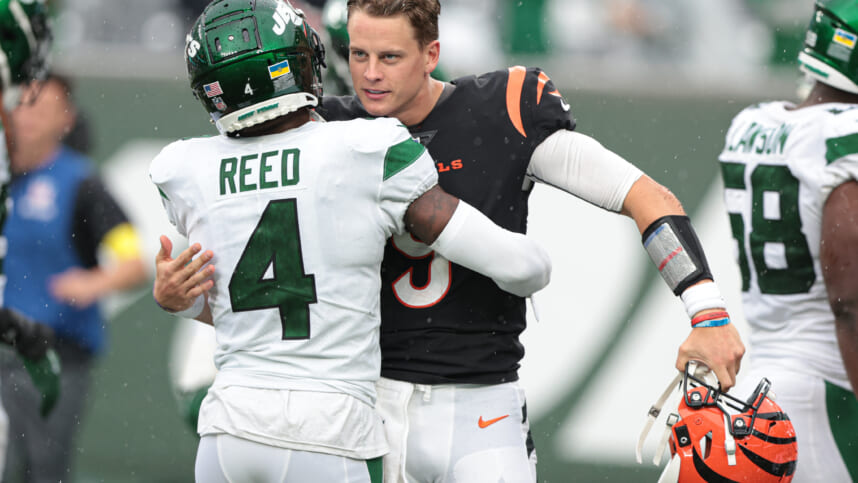 One of the biggest additions made by the New York Jets this offseason was the signing of cornerback DJ Reed. The team went out and signed the 25-year-old to a big three-year contract in hopes of bolstering the pass defense in coverage.

Throughout his first seven games with the Jets, Reed has undeniably proven himself to be money well spent by Joe Douglas.

A look at DJ Reed’s early success with the New York Jets:

One key point that has likely directed to immediate success for Reed is the recent experience he had with Robert Saleh. The two already knew each other from having spent two years together with the San Francisco 49ers (2018-19). Having a knowledge of one another probably only provided a leg-up right off the bat for Reed in joining a new team.

Reed certainly breeds confidence in his play, as any great cornerback needs to. And for Reed, coming off of a career year in 2021, the swagger he exudes is more than deserving.

While he may not have the imposing height at 5-foot-9, Reed has enough size, listed at 188 pounds. He plays a very tough, physical brand of football on the outside. From a physical standpoint, most importantly, what Reed provides is great arm length. His 31 5/8″ length has been on display all throughout the year with his constant plays made on the ball.

So far, in seven games this year, Reed has accumulated one interception, and five passes defended. He has not missed a snap all season for this defense. Reed has a stellar PFF grade of 77.1, allowing 19 catches on 36 targets. He has shut receivers down week in and week out and made plays on the ball in coverage, with no performance better than his one this last Sunday.

In the win to get to 5-2, Reed picked up an impressive three passes defended in coverage. He helped set up C.J. Mosley on what was nearly the game-ending interception. On another great play, Reed stayed in-phase well against a deep route that he was targeted on, stayed patient, and used his length to make a play and break up the pass.

Lastly, arguably his most noteworthy highlight in Week 7 was his physical hit on a screen thrown to Jerry Jeudy that Reed read exceptionally well.

The physicality and reliable tackling that Reed provided on the edge was one of his most notable strengths when the Jets signed him. And he has delivered. Reed has one tackle for loss, a forced fumble, and 30 total tackles, 29 of which are solo.

Many terrific qualities of Reed’s game have been on display in the early going of his tenure with the Jets. Whether it be his toughness, intelligence, competitiveness, coverage ability, ball skills, quickness, or tackling, Reed has shown so much of his complete skill set already.

Reed plays an important position, has a great pedigree, is establishing himself as a core team leader while being young and entering his prime years. Alongside Sauce Gardner and Michael Carter II, the Jets cornerback trio is filled with youth and players executing at an elite level. Reed has been one of the Jets’ best players so far in 2022 and should only keep building.