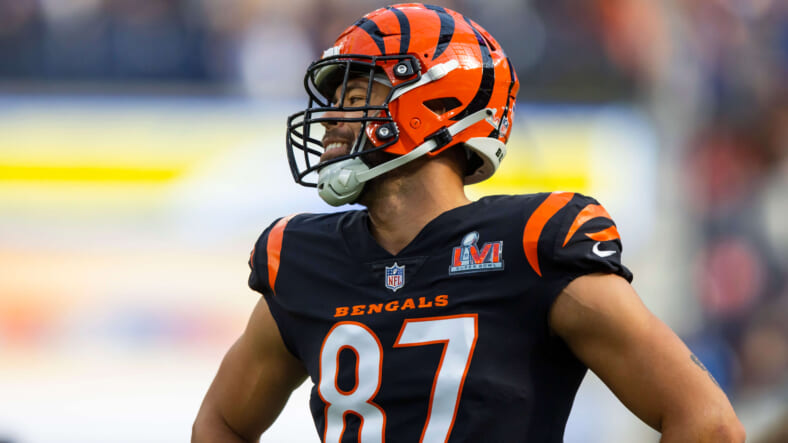 Two of the New York Jets’ biggest free agency signings over the last two offseasons have identical paths to the Jets. Carl Lawson in 2021 and CJ Uzomah this offseason both signed with the Jets on three-year contracts.

The two have made the same stops along the way to their time with the Jets. For starters, both players are from Georgia. They each played their college ball at Auburn. There, Uzomah and Lawson were teammates for two years (2013-14).

Uzomah, two years older than Lawson, was the first one to bolt to the NFL. In 2015, the Cincinnati Bengals drafted Uzomah in the fifth round, where he would go on to spend seven years with the team. Just two years after adding Uzomah, in 2017, the Bengals selected Lawson in the fourth round. Following two years of being college teammates, the two were NFL teammates for four years (2017-20) before Lawson came to the Jets.

Both players had some fairly documented endings with the Bengals. There was much speculation on whether or not the Bengals would franchise tag Lawson, they ended up not doing so, and the Jets scooped him up.

Following seven years with mostly rebuilding teams, Uzomah was a core vocal leader for the Bengals on their 2021 run to the Super Bowl. He was likely and rightfully so a bit disappointed that they did not want him back. There were also reports that after the Jets had verbally agreed with Uzomah that the Bengals tried to make a late play to retain him. But at that point, Uzomah was committed to the Jets, where he would rejoin with his Auburn and Bengal teammate.

Both players have commented on this week’s matchup. They happen to have different outlooks.

After missing Week 2, Uzomah made known to the New York Post, “I can’t miss this game, I want to play in this game.” He also stated, “There were a bunch of factors that led me here, I’m here now and that’s all that matters, … I couldn’t be happier. I’m focused on this season, this team and getting back to the Super Bowl.”

Lawson met with reporters just yesterday. He said this game is “no different for me.” He said his emotions are “Nothing, really. Same as every game, you know, gotta go out there and win, no different emotion” in going against his old team.

Uzomah is a full participant for practice today and is good to go for Sunday. Expect him to be involved and have his first productive game with the Jets. The Bengals’ offensive line has continued to struggle, and Lawson should make a sizable impact in this one.