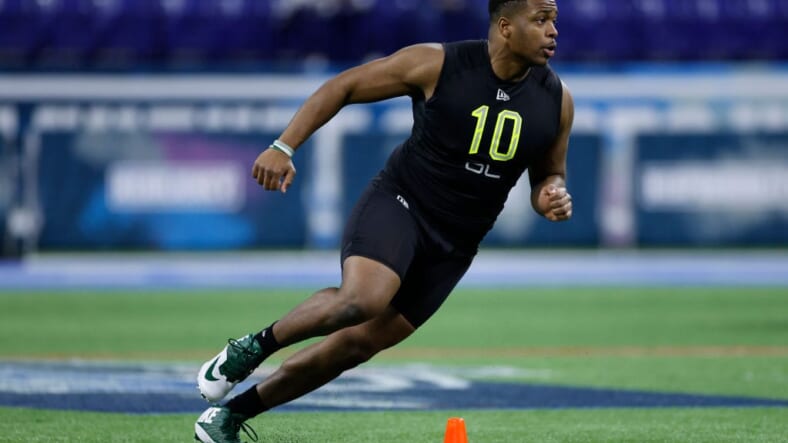 INDIANAPOLIS, IN - FEBRUARY 28: Offensive lineman Cameron Clark of Charlotte runs a drill during the NFL Combine at Lucas Oil Stadium on February 28, 2020 in Indianapolis, Indiana. (Photo by Joe Robbins/Getty Images)

The New York Jets ended practice early after Clark, a second-year blocker, was stretchered off the practice field.

Clark was motionless for nearly ten minutes while medical staff attended to him and he was eventually stretchered off the field and transferred to Morristown Medical Center. The Jets have announced that Clark was diagnosed with a spinal cord contusion but is expected to make a full recovery. He will be held in Morristown overnight for observation.

A further report from ESPN’s Rich Cimini dictated that Clark’s father Al reported a positive diagnosis. Clark reportedly lost feeling in his legs after the incident but returned while he was being transferred. The elder Clark says his son is “fine” and reiterated that there is no spinal cord damage, though he will undergo an MRI in Morristown.

Addressing the situation after practice, head coach Robert Saleh had another team session planned but broke practice out of respect to Clark’s situation.

“It’s never good because football goes away at that moment,” Saleh said in a report from team writers Eric Allen and Ethan Greenberg. “It’s about the person, his family, his mom, and everything in his life. So that’s what takes precedence at that moment. Football kind of goes away. You get empathy in the sense that we all have families. Everything’s going to be good.”

Saleh further reported that he saw the Clark incident “out of the corner of (his) eye”.

“It looked like he was kicking into protection and then he was on the ground,” the head coach said. “I’ll have to go to the tape to see exactly what happened.”

Defensive end Carl Lawson agreed with Saleh’s shutdown and mentioned that the team had a moment of silence in Clark’s honor.

“It shows what type of man Coach Saleh is to at that point realize the situation and cut practice from there to make sure he was OK,” Lawson said. “I think the sentiment was for everybody, even the fans, that we’re hoping nothing is seriously wrong.”

Clark, 23, was chosen in the fourth round of the 2020 draft (129th overall), though he did not partake in any games last season. He is one of the most prominent faces of the University of North Carolina at Charlotte’s rebooted football team, partaking in a program-record 49 games. Primarily working at tackle, Clark earned first-team All-Conference USA honors and helped the 49ers partake in their first bowl game at the end of his final campaign in 2019.