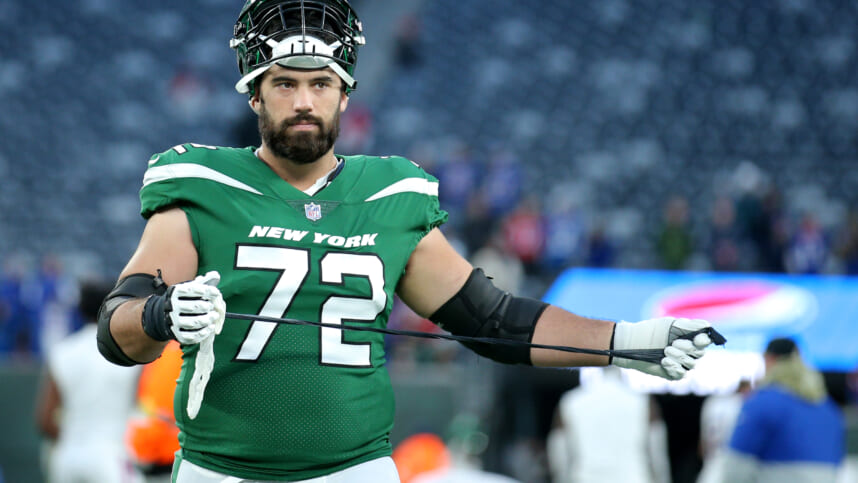 Early this morning, it was reported on by Ian Rapoport of NFL Network that the New York Jets are bringing in free agent offensive lineman, Laurent Duvernay-Tardif for a workout.

The Jets and Duvernay-Tardif have some recent familiarity with each other. Just a year ago, the Jets made a move at the trade deadline to acquire Duvernay-Tardif.

In 2021 for the Jets, Duvernay-Tardif played in eight games, started seven of those, and played 390 snaps. He happened to play some good football over that stretch.

What Laurent Duvernay-Tardif would bring to the New York Jets:

Following his success throughout the second half of 2021, there was hope that the Jets would find a way to re-sign Duvernay-Tardif. However, knowing his medical career, working at a hospital in Montreal, there was always an expectation that he would not return to playing football.

Per Rapoport, Duvernay-Tardif completed his residency program at the Montreal hospital. This reunion between the Jets and Duvernay-Tardif seems very possible. Rapoport did note that he could just sign to the practice squad. Of course, though, he can be elevated to the active roster on game day.

Duvernay-Tardif is now 31 years old. This would be the start of his ninth season in the NFL. He has accumulated some good success over his 64 career starts.

The familiarity with the Jets and the offensive scheme could certainly help Duvernay-Tardif come in and get up to speed fast. On the interior of the offensive line, the only backup the Jets have at the moment is guard/center, Dan Feeney.

To add Duvernay-Tardif with Feeney would provide the Jets with strong interior offensive line depth down the stretch behind an already stout starting trio of Laken Tomlinson, Connor McGovern, and Nate Herbig. It always seemed as if Duvernay-Tardif wanted to return to the Jets, hopefully, it happens later today.