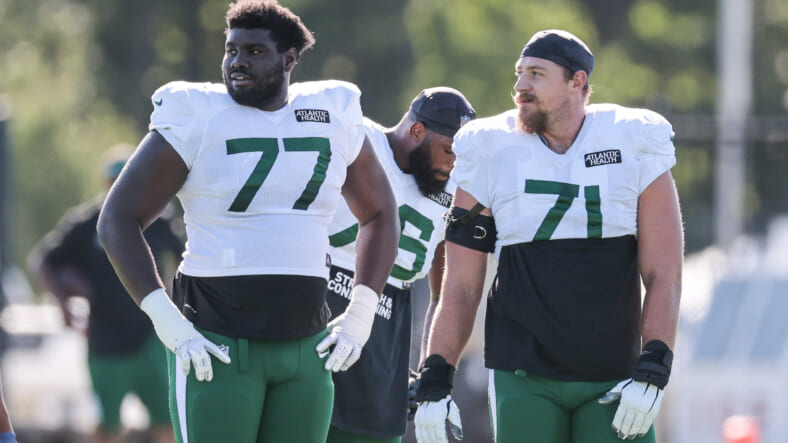 How can the New York Jets end a (literally) painful visit to Wisconsin on the right note? ESM’s Jets experts investigate…

The Jets will seek to end a business trip to Wisconsin on the right note on Saturday late afternoon, as they’ll battle the Green Bay Packers in an exhibition contest (4:25 p.m. ET, WLNY/NFL Network). New York and Green Bay have done battle this week through a pair of joint practices within a stone’s throw of the football cathedral.

The latter portion was a scene plucked from Jets’ fans’ most garish nightmares: defensive end Carl Lawson was carted off the field during a team drill. Their newly acquired pressure artist was later revealed to have torn his Achilles tendon, an injury that will keep force him to miss the entire 2021 season. Undrafted secondary defender Zane Lewis was likewise lost for the year in a separate medical incident.

So how can the Jets leave Titletown with a sense of accomplishment, no matter how small? ESM’s Jets experts investigate with an attainable goal for the Jets to aspire to.

LOL Mekhi Becton is so ridiculously strong. Not much momentum in this slow reach block pancake. pic.twitter.com/7iK97iYL85

Jets fans have every right to be sad and upset over losing Lawson. But, as we discussed earlier this week, his prescience alone didn’t launch the Jets into the playoff conversation and the front seven’s pass rush potential is deep enough to weather the coming storm in 2021. This was always going to be a year centered on development and Lawson’s injury shouldn’t change that.

This season is about finding long-term solutions that can sustain the Jets during the potential good time ahead. One area that was full of fostered potential is the offensive line made to protect the new franchise quarterback Zach Wilson. The blockers mostly did their job last weekend against the Giants’ reserve defenders…they allowed only one sack on the night and their rushers had a little bit of real estate to work with. But this week featured some developments, perhaps masked by the mourning over Lawson, that could have the Jets questioning their depth on the offensive wall.

One of their blocking staples from the last two seasons, guard Alex Lewis, retired this week. Another interior blocking project, 2020 fourth-rounder Cameron Clark, was also placed on injured reserve. Alijah Vera-Tucker, drafted to take over interior duties on Wilson’s blindside, has dealt with a pectoral muscle injury all camp and likely won’t play on Saturday.

Jets offensive coordinator Mike LaFleur mentioned that Becton was “going through some things right now”, per notes from the Jets. LaFleur nonetheless remained confident that Becton would regain his freshman swagger before opening weekend in Charlotte.

“Heâ€™ll keep on going. Weâ€™re only one preseason game in, we still have over three and a half weeks until we go out and play Carolina. Every day, there are still slight improvements that heâ€™s making and weâ€™re just trying to take it one day at a time right now,” LaFleur said. “Mekhi, he didnâ€™t have a training camp last year. He didnâ€™t have an OTAs last May and June so, heâ€™s still working through some things. I got all the confidence in the world in Mekhi because one, I know how talented he is and two, heâ€™s a good dude and heâ€™s going to work through all this stuff. We got a long way to go across that whole front, across this whole offense and myself included.”

The Jets thus need to use Saturday’s proceedings as a way to build back confidence. Green Bay will likewise be resting many of its starters on Saturday, but a big opportunity lingers to regain the good vibes felt after last week’s win over the Giants. Some names to watch include Dan Feeney, who should continue to get premier interior reps with the first team, and David Moore, an undrafted first-year out of Grambling who drew interest from several teams on the rookie free agency market.

Bryce Huff gets things started for the Jets defense!pic.twitter.com/XPlZ2aGI7c

The Jets have had a rough week. Leading up to their Saturday afternoon game against the Packers, joint practices took place in Green Bay. As we know by now, these practices were not injury-free.

.There were a few bumps and bruises, but no injury was bigger than that of Carl Lawson. He is going to miss the season with a torn Achilles. This gut-wrenching news, however, does bring about a new goal for the second preseason game: to see the rest of the depth at defensive end produce.

Outside of Lawson, the Jets have John Franklin-Myers, Bryce Huff, Ronald Blair, Jabari Zuniga, and Vinny Curry, (who should return to the field around Week 2). Lawson was clearly the number-one edge rush option, but the team has nice depth and should still be able to apply pressure. The Jets will most likely have an even more noticeable rotation at end during Saturday’s game, and that’s fine.

The season isn’t over. The loss of Lawson hurts, but it creates an opportunity for other players to show their worth on the field. It won’t be easy to replace the impact the Jets’ most expensive offseason addition would’ve had on the field, but they’ll find a way to compensate. The opportunity starts against Green Bay, and they should be up to the task.

Don’t necessarily look for a substantial amount of sacks against the Packers, but the line should be able to make noticeable noise in the backfield on drop-backs. That alone would be enough to reach this new goal on short notice.