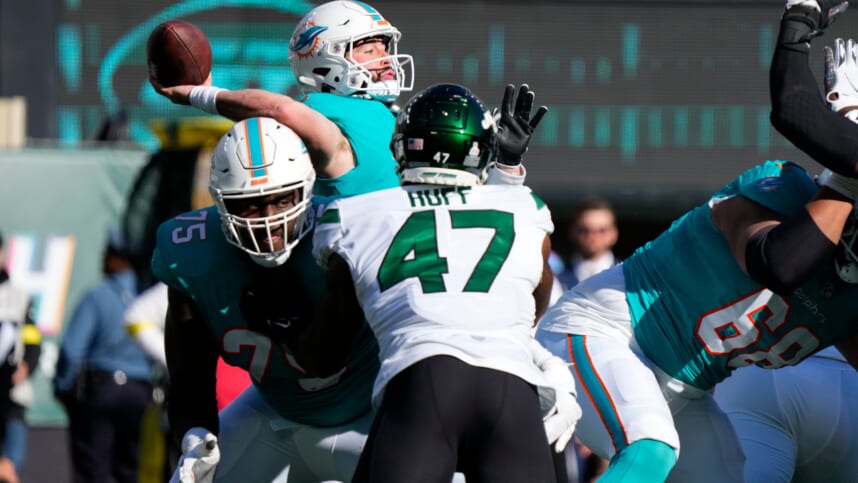 Since being on the active roster for gameday in Week 4, New York Jets edge defender, Bryce Huff has provided a pass-rushing spark.

Huff joined the Jets as an undrafted free agent in 2020. He has always been known to be a gifted pass-rush specialist. Huff has enticing traits with his fast get-off, twitch, rush moves, bend turning the corner, and closing speed.

The Jets are incredibly deep at defensive end, but the decision to keep Huff on the inactive list for the first three games of the season was always a bit of a head-scratcher. And in just five games of being active, Huff has made one impressive impact.

In five games this year, Huff has played a total of just 79 snaps (15.8 per game). Essentially all of those snaps have come on passing downs.

While Huff may have just 0.5 sacks, he does have four quarterback hits, nearly one per game. Huff also has 15 total pressures, nine of which are hurries. So while averaging 15.8 reps a game, Huff is getting, on average, three pressures per game, impressive production.

Huff recorded a season-best of four pressures in Week 5. Of his other four games, Huff had three pressures in three of those games, and two in the other, proving week-to-week consistency.

In Week 8, per Next Gen Stats, Huff did some elite things on the edge. For starters, his fast first step, as highlighted above, set a best for all edge defenders in 2022. Huff had a time of 0.65 seconds to cross the line of scrimmage, the fastest of all edge defenders with at least 50 rushes on the year. The second best time is 0.70, recorded by Myles Garrett.

From there, Huff had the best pass rush win rate of all edge players in Week 8 with a 45.5% rate. The second and third-best rates were 37.5% and 31.3%, further proving Huff’s excellence.

Going a bit further, Huff’s role specifically is to play on third downs or obvious passing situations. Of his 79 reps, only one of those plays happened to be a run.

When Huff is on the field, he works alongside a few of the Jets’ other prime pass rushers in, Quinnen Williams and Carl Lawson. When the three are on the field together, they have enjoyed dominant success. In total, the three have had 19 snaps together, recording 15 pressures, six quarterback hits, and three sacks.

Huff has firmly established himself as a core edge pass rusher on throwing downs for the Jets’ defense. He has the second-best pressure rate from the edge in football at the moment.

He is an anchor to this defense getting off the field on third downs. With Jacob Martin moved earlier this week at the trade deadline, it signals the Jets are ready to give Huff more work.

The exciting thing is that Huff is only 24 years old and growing at a premium position. Joe Douglas, Robert Saleh, and Jeff Ulbrich cannot have enough pass rushers at their disposal. Having a core of Williams, Lawson, John Franklin-Myers, Sheldon Rankins, Jermaine Johnson, Micheal Clemons, and Huff is a very promising group.