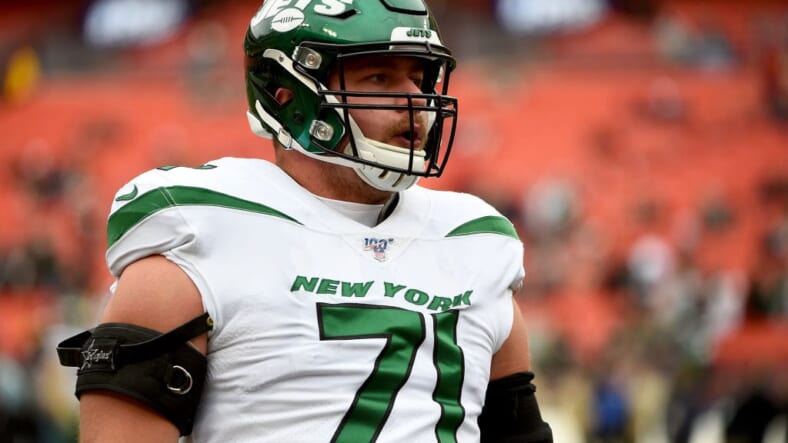 LANDOVER, MD - NOVEMBER 17: Alex Lewis #71 of the New York Jets looks on prior to the game against the Washington Redskins at FedExField on November 17, 2019 in Landover, Maryland. (Photo by Will Newton/Getty Images)

The New York Jets’ veteran blocker will not partake in Sunday’s game against Las Vegas after being placed on the non-football injury list.

“Heâ€™ll be out for the game,” Gase said. “Heâ€™s been in meetings…As soon as we have a resolution to this, then we can talk more about it.”

With his placement on the NFI list, Lewis will miss at least the next three games, eligible to return for the Jets’ penultimate game of the season on December 27 against the Cleveland Browns.

ESPN’s Rich Cimini shed some light on Lewis’ situation, mentioning that he is seeking help for an “off-the-field issue”. The Jets will continue to pay him during this process.

Lewis, 28, is in the midst of his second season with the Jets, having come over in a late-summer trade with the Baltimore Ravens during the 2019 offseason. Pro Football Focus has Lewis consistently ranked as the second-best lineman among qualifiers behind only Mekhi Becton. Lewis signed a three-year contract extension during the offseason but could be a salary cap casualty with the Jets poised to save just over $5.3 million if he is released.

It’s possible that relative newcomer Pat Elfein could take over for Lewis in his spot on the offensive line’s interior. Elfein took over for Lewis last week against Miami and previously made 43 starts over three-plus seasons with the Minnesota Vikings. He appeared in Minnesota’s Week 1 loss to the Green Bay Packers, but was sidelined with a thumb injury that led to a stint on injured reserve. The Jets signed him shortly after Minnesota released him upon activation from IR. Elfein was limited in Friday’s practice with a shoulder ailment.

Despite the loss of Lewis, the Jets (0-11) will be getting some of their blocking depth back, as Gase said that he expects to have both George Fant and Chuma Edoga back from ankle issues after each missed last week’s loss to Miami in East Rutherford. Fant was limited on Friday, but while Edoga was a full participant every day this week.