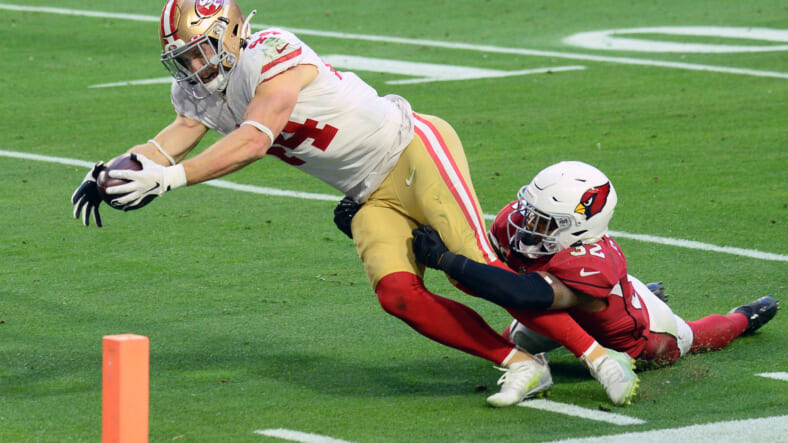 Employing a fullback would be a familiar way for the newly minted New York Jets coaching staff to find an offensive spark.

Kyle Juszczyk threw him off with disdain ?

The modern NFL is one ruled by “Big Offense”, an athletic denomination ruled by a deity known as fantasy football. Scoring four touchdowns in a losing effort has become more common and no less frustrating. Three of the seven highest-scoring games in NFL history have come in the last decade.

These phenomena and more have made the New York Jets’ offensive ineptitude all the more impressive from a macabre standpoint.

Enough has been written about how the Jets have lacked a true franchise quarterback solution since the Nixon resignation, but last year’s edition hit astonishing new lows. They failed to break the 300-yard plateau in all but five of their games last season. The two-touchdown threshold was crossed only seven times. New York has been victimized for two of the six shutouts tallied over the past couple of seasons.

In short, the Jets’ offense could use whatever help it can get. New assistance can spawn from the annals of NFL history if they’re willing to try. Reviving old properties appears to be good enough for Hollywood, so why can’t it work for the Jets? No one’s saying, of course, that the Jets have to go too far…so don’t expect to see, say, the T-formation or goalposts in the middle of the end zone at MetLife Stadium next season. But the team could be well-served by employing the services of a fullback as they start to traverse a new era.

Now, the fullback hasn’t fully gone the way of the single-bar facemask just yet, but it’s certainly an endangered species. We’re certainly far beyond the days where the man in the role was a household name on a championship team like Daryl Johnston, Mike Alstott, or even William “Refridgerator” Perry. But there appears to be a correlation between teams that employ a fullback in their modern roster and recent success.

“Not every team uses my position,” Derek Watt, then of the Los Angeles Chargers, told Nick Wagoner and Eric Williams of ESPN in 2019. “But teams that do, at least a handful that remained in the playoffs late last year, a majority of them had a fullback on the roster. I’m not saying that correlates to anything, but those teams that made it deep in the playoffs did have a fullback. That’s just an observation.”

Watt, now with the Pittsburgh Steelers, was sixth-round pick of the Chargers in 2016 and worked his way into the lineup during the 2018 season. A year after, Watt earned 10 touches (7 carries, 3 receptions), all but three of which went for first downs. To his point about fullbacks and postseason endeavors, three of the eight Divisional round participants (Baltimore, San Francisco, Minnesota), used a fullback on over 30 percent of their offensive (Patrick Ricard, Kyle Juszczyk, and C.J. Ham respectively). Others, Tennessee, have used tight ends (like Jonnu Smith) in the spot. The tournament’s Super Bowl champion, the Kansas City Chiefs, has kept 2014 All-Pro Anthony Sherman on retainer for the past eight seasons.

The Jets are no strangers to fullback endeavors, as the turn of the century has seen them employ crucial contributors like Richie Anderson and Tony Richardson. Names from the past include Brad Baxter, Roger Vick, Mike Augustyniak, Clark Gaines, and future Super Bowl MVP and Hall of Famer John Riggins. New York has mostly eschewed the concept since the end of the Rex Ryan era, when he tried to replace the retiring Richardson with Lex Hilliard and John “The Terminator” Conner. XFL draftee Tommy Bohanon was briefly considered during Todd Bowles’ time with offensive coordinator Chan Gailey.

Adam Gase attempted to turn 2019 draftee Trevon Wesco into a bit of a power option, and the concept somewhat paid off during his rookie season. Wesco earned three first downs on four touches during his debut campaign, but Gase mostly abandoned the concept when a fullback gambit failed to yield a first down in an early crucial juncture of the Jets’ loss to Arizona last October.

With the Gase era mercifully over, you’d think the Jets would be wise to cut off all ties from the previous regime, include those established in the starting lineup. But the Jets are now armed with a coaching staff that knows how to work the position and how to tinker with it to achieve maximum firepower.

If the Jets are to reintroduce a fullback to their lineup on a consistent basis, their timing will likely never be better. Robert Saleh and his San Francisco (including new offensive boss Mike LaFleur) imports know what it’s like to reap the benefits of a fullback’s work, having played witness to the rise of Juszczyk (pronounced YOOZ-check) over the past four seasons in the Bay Area. Each has ended in an invite to the Pro Bowl, including the virtual edition held last month. Those in Baltimore previously saw what Juszczyk was capable of when he first joined the team as a fourth-round pick in 2013. But Juszczyk truly began to hone his powers with the 49ers, his dominance perhaps summitting last season. Not only did Juszczyk score a career-best six touchdowns, but his blocking helped pave the way for a rushing unit decimated by injuries. Two of those rushers, Raheem Mostert and Jeff Wilson Jr., earned at least 4.8 yards per carry with triple-digit carries. In the aforementioned 2019 playoff run, Juszczyk became the first fullback since Alstott to score a touchdown in the Super Bowl.

During his opening statements, Saleh hinted that the Jets hope to emulate the offensive gameplans Kyle Shanahan has established. In addition to the work he put in with Juszczyk over the past four seasons, Shanahan would also utilize Patrick DiMarco as a receiver during his time in Atlanta under Dan Quinn.

“Mike LaFleur has been with Kyle for I think heâ€™s going on eight years now of professional football, which has been his entire career and nobody in the world knows it better than he does,” Saleh said, per notes from the Jets. “To be able to have him and to get John Benton along with us as run game coordinator, we’re really excited about them being able to install the system and implement the vision that we all want to see.”

Wouldn’t you know it, a certain 49er is up for free agency.

Juszczyk is set to hit the open market following the expiration of a four-year, $21 million deal inked in 2017. Nothing more needs to be said about the Jets’ blessed cap space situation, so a slightly larger deal would definitely be something worth investigating. The work Juszczyk did with his blocking last season would also help soothe some concerns the Jets have about their primary run game, which is out of sorts after the highly publicized Le’Veon Bell departure. His blocking can bestow confidence to a rushing attack that’s currently poised to be led by 2020 fourth-rounder La’mical Perine.

Taboo as the position may be, it’s a risk the Jets almost can’t afford not to take. Even if they miss out on Juszczyk, the upcoming draft provides several attractive backup plans like Senior Bowl standout and Cotton Bowl Classic MVP Rhamondre Stevenson out of Oklahoma, who could be worth looking at with one half of their third-round pair.

The modern NFL’s focus on offense makes the Jets’ ineptitude all the more shocking. It may be time to go against the trend in a more positive, refreshing way.

“When you look at the teams who are doing well, particularly late in the season, they typically have a power formationâ€”or what I call ‘big-boy football,'” Earnest Byner, a former fullback and three-decade NFL veteran as a player and coach. told Brent Sobleski of Bleacher Report in 2016. “When it comes down to it, those teams are going to get you into a box and beat you up.”

“this sets the tone for a comeback of two-back offenses. When you need him, you better have a guy who can put a helmet on the linebacker to get the runner to the second level.”