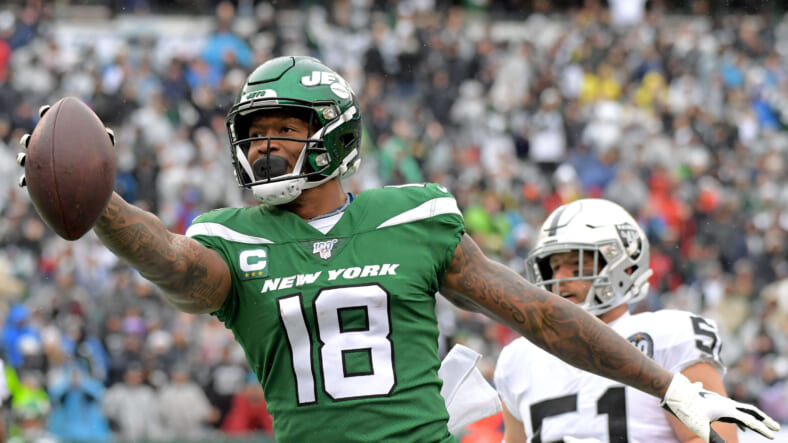 Deep into the offseason, Demaryius Thomas remains a free agent. A return to the New York Jets would be beneficial for all sides.

Legends of NFL lore have borne the green of the New York Jets…albeit too late in their careers to make an impact.

The uniforms have hosted a plethora of superstars making a stop in the metropolitan area, looking as out of place as Vince Vaughn did in thatÂ Psycho remake. You could, in fact, form a whole that would probably win 10-12 games in their prime with the out-of-place gridiron gods that have passed through Jets camp. Brett Favre could be throwing passes to Art Monk while Jason Taylor and Ty Law handled things on defense (Law, to his credit, put up 10 interceptions in 2005).

Demaryius Thomas could be the next name on that list. A recent slew of injuries and perhaps sheer bad luck has caused many to forget just how explosive and game-changing a receiver Thomas can be. Between the 2012 and 2017 seasons, only Antonio Brown and Julio Jones acquired more receiving yardage than Thomas. Some could say those numbers were inflated with Peyton Manning throwing him the ball in Denver, but Thomas managed to make the most of situations where journeymen like Tim Tebow and Trevor Siemian. During his final full season with the Broncos (2017), Thomas still appeared in the top 20 in receiving yards (949) and receptions (83) with a terrifying throwing hydra of Siemian, Brock Osweiler, and Paxton Lynch reigning in Denver.

Embracing a rebuild, Denver traded Thomas to Houston where he suffered a torn Achilles. The Texans released him soon after and a comeback effort with the Patriots that ensuing summer went for naught. A rare trade between AFC East rivals sent Thomas the Jets’ way, where pedestrian numbers awaited (433 yards on 36 receptions and a score over 11 games).

Today’s NFL is one of instant gratification and memory spans shorter than a New York minute. Cam Newton, an MVP as little as five seasons ago, was a free agent into June. Thomas, 32, remains on the pickup list awaiting an opportunity as the NFL offseason reaches its twilight stages and an uncertain future.

A New York Jets reunion would not only benefit Thomas but help Gang Green solve some immediate problems of their own.

The idea of a Thomas return was ignited by a report from Connor Hughes of The Athletic earlier this month, who mentioned that the two sides “are talking” about 2020. It’s foolhardy to assume that his rearrival makes the Jets an instant contender but he’s the exact type of player the Jets need right now.

It’s admirable to see that the latest stage of the Jets’ perpetual rebuild has gone with a youth-oriented approach. Only six players on the squad are at least 30 and three of them are newcomers Frank Gore, Joe Flacco, and Brett Maher. But every rebuilding young squad needs some sort of veteran anchor, a veteran mentor to keep things rolling. A veteran anchor is a player that has been there before, someone who has seen the trials and tribulations a professional league has to offer, one that can make a transition of power all the more smooth.

Josh McCown perhaps fulfilled that role for the Jets before his brief retirement. Their metropolitan athletic brethren have employed similar concepts in their own rebuilds, as Henrik Lundqvist has taken on a similar role with the New York Rangers. The Brooklyn Nets took on two in the forms of DeAndre Jordan and Wilson Chandler.

Thomas would could help a receivers room in desperate need of some guidance. Slot man Jamison Crowder is currently the most experienced option, sharing the honor with Breshad Perriman. The latter is expected to be the top receiving option alongside second-round pick Denzel Mims.Â Thomas can be a reassuring veteran prescience that can help Perriman expand on the career-best stretch we saw at the end of last season, as well as a strong instant teacher for Mims.

His influence on the youth has been perfectly documented by the case of 24-year-old Vyncint Smith. The pair worked together during their brief time in Houston and Thomas convinced Jets management to take a waiver on the undrafted veteran from Division II Limestone College. Reunited with Thomas, Smith made in an impact in the Jets’ starting lineup, making four starts and tallying 277 yards from scrimmage.

“He’s a big help. He’s the reason I came over to the Jets when they were scouting my film,” Smith said to Olivia Landis of NewYorkJets.com. “They asked him about me, and he said, ‘Yeah bring him in, he’s going to be big.’ He helped me out in Houston and I helped him a little bit with the plays, and he helped me with everything else. Things like being a professional on and off the field, he’s helped out a lot.”

Thomas’ leadership was rewarded through captaincy honors in November.

â€œItâ€™s because everybody respects the man, the young guys and the older guys,â€ fellow captain Steve McLendon told Peter Botte of the New York Post. â€œDemaryius is a man of few words, but when he does say something, you take it to heart. Plus, he has gone and been to where we all desire to go and be.â€

McLendon was perhaps indirectly referring to the Super Bowl, which Thomas has visited twice. His Super Bowl touchdown, in fact, came at MetLife Stadium, the lone bright mark for Denver in their 43-8 loss to Seattle in the game’s 48th edition. It was one of a Super Bowl-record 13 receptions for Thomas in that game. He’d eventually get his long-sought-after ring in the return trip two years later, when the Broncos topped Carolina 24-10 in Santa Clara.

Set to turn 33 this Christmas, it’s possible that Thomas might never be the same after the injury in Houston ended his 2018 season. But a chance to leave a lasting legacy could await him in New York. It’s no guarantee that he would be around to truly reap the fruits of his potential veteran labor, but a simple one-year signing, so common in this offseason, could pay big dividends in the long run.

Images of Favre, Law, etc. wearing Jets green may be viewed as sacrilegious by the football faithful. They’ll more than likely lump Thomas in the same view, but the modern Jets could look back on such an image fondly if the leadership returns in this crucial year.