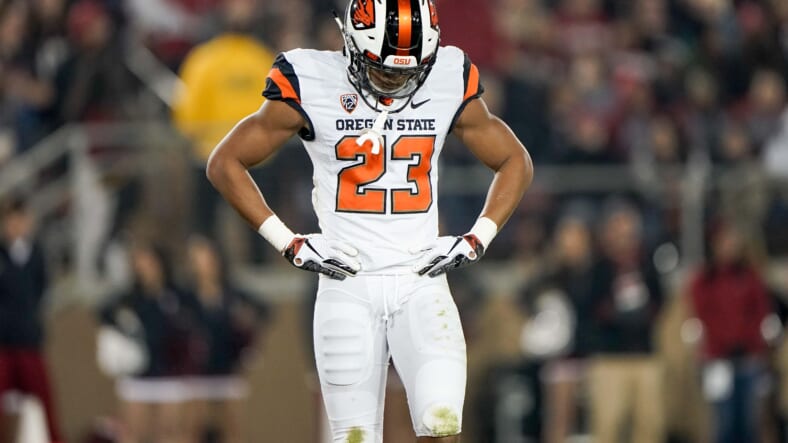 The New York Jets have earned high praise for their work at the 2021 NFL Draft in Cleveland. However, their offseason duties still aren’t over, as undrafted prospects received their calls after the original 259.

While the Jets are pleased with their draft weekend haul, they’ve enjoyed sizable contributions from UDFA’s in recent seasons. As a team coming off a two-win season and saddled with a playoff drought entering a decade, the Jets will certainly take help from whatever source they can get.

In the realm of the New York undrafted, ESM has four names to keep an eye on…

Oregon State CB Isaiah Dunn is a guy the Jets coveted as a priority free agent. Gave him $200K deal which is a decent chunk for UDFA. Has a shot to make the 53 given the lack of depth the Jets have at the position. pic.twitter.com/wLk2boMymt

At the rate they’re paying him…per Aaron Wilson, Dunn’s guaranteed salary of $185,000 is the most expensive deal ever bestowed to an undrafted cornerback…the Jets definitely have plans for the former Beaver. All but one of their picks on day three were centered on defense, but they were likely attracted to Dunn’s ball skills and speed (posting a 4.39 40-time during his pro day) once the draft clock was put back in storage. The Jets have a crowded cornerback picture, but with so many unproven pieces, Dunn has a realistic chance to battle for a roster spot.

It seems like a small task, but one of the Jets’ most interesting developments of the offseason has been their dedication to fixing their special teams…which have been special in name only. This Auburn addition, complemented by fellow undrafted rookie Chris Naggar (set to compete with Sam Ficken for kicking duties) and veteran cornerback Justin Hardee, could help make things right.

Peters should be an incredible tool for returning coordinator Brant Boyer. Labeled a “special teams maestro” by Alabama.com’s Tom Green, Peter blocked four punts during his time with the Tigers. Peters also provided some solid defensive depth, earning 101 tackles (7 for a loss) over his four years as an Auburn safety.

One area where the Jets need some assistance is their pass rush, especially when four games of their future schedules could well feature the multi-faceted talents of Josh Allen and Tua Tagovailoa. Rashed burst onto the scene with a dominant junior season, leading the nation with 23 tackles for a loss and the Pac-12 with 14 sacks in 2019 (an OSU record).

Returning for his senior season proved to be a tough decision for Rashed, whose production drastically dropped after dealing with injuries and opt-outs from key defensive contributors. He was nonetheless bestowed an honorable mention by Pac-12 Team voters. Bringing in Rashed on an undrafted free agency deal is a low-risk, high-reward endeavor that can shore up an area where the Jets have been suffering for years.

Some found it a little surprising that the Jets didn’t look to the draft to put some heat on Chris Herndon and create a competition for the primary tight end spot. Yeboah enjoyed a bit of a breakout at the start of his fifth college season, transferring to Oxford after four years at Temple. Over the first four games of a shortened season, Yeboah earned 438 yards (including 183 alone against Alabama) and four scores. Yeboah has some focus issues, leading to a troubling number of drops, and probably went undrafted after some tough breaks in his blocking game. However, he can offer a youthful spark to a depth chart currently dominated by veterans Herndon, Tyler Kroft, and Ryan Griffin.

Much like Dunn, the Jets spared no expense when it came to Yeboah, a one-year college teammate of second-round pick Elijah Moore. NFL Network’s Tom Pelissero, the former basketball player was granted a $200,000 deal.