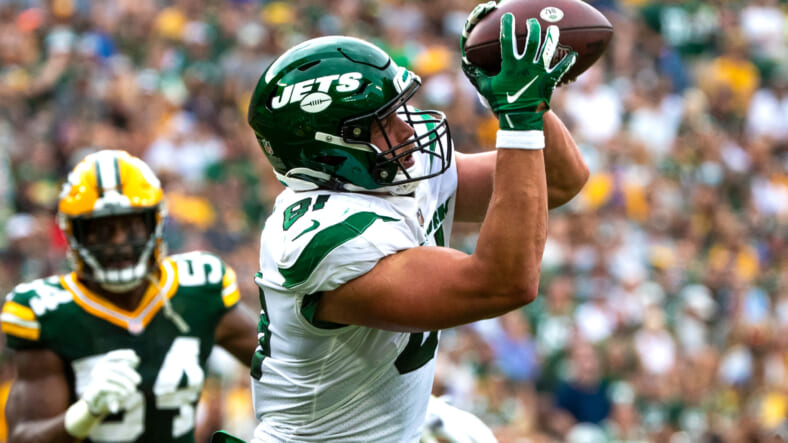 Zach Wilson earned his first two unofficial touchdown passes as a New York Jet on Saturday, each going to Tyler Kroft, while Corey Davis established a connection with the young quarterback through a 70-yard showing on four catches. The Jets’ rookie quarterback completed 9-of-11 passes overall for 128 yards, playing four drives in a 23-14 victory over the Green Bay Packers at Lambeau Field.

Despite a tough showing from the defense in their first post-Carl Lawson injury showing…the ultimate insult being a 19-play, 81-yard scoring drive from the Packers’ offensive reserves…the Jets are likely enthused over their Saturday showings on offensive and special teams. Matt Ammendola converted three field goals, while Corey Ballentine set up the latter touchdown drive with a 73-yard kickoff return. Young men in the secondary managed to provide late defensive redemption, as Brandin Echols and Lamar Jackson each stole a pass from Kurt Benkert and Jake Dolegala respectively.

Corey Davis in two quarters with the Jets:

After he was granted one series in the Snoopy Bowl last weekend, Davis was granted some extended time to work with Wilson in Green Bay. The two further strengthened their connection to the tune of a game-high 70 yards, including two big ones at the end of the first quarter that set up the Jets’ first touchdown.

“We’re definitely getting (chemistry),” Davis said of his connection with Wilson, per Jack Bell of NewYorkJets.com. “We’ve made a lot of huge strides the last week and a half, two weeks. I think Zach is a lot more comfortable in the pocket, he’s been more accurate. I’ve been getting open and creating space to try and make it easier for him.”

It’s been a while since the Jets have had a consistent red zone threat at tight end, perhaps dating back to the days of Mickey Shuler (although there have been brief flashes of brilliance, like Dustin Keller and Anthony Becht). Kroft could turn out to be a valuable diamond in the rough signing if he keeps this up and appears well on-pace to usurp the starting tight end role from Chris Herndon.

How about that half for @ZachWilson?!

Wilson’s success undoubtedly comes with the caveats that he’s doing this against reserve defenses in the preseason, but it’s hard not to feel excited about what he’s been able to accomplish this summer (especially when his shortcomings in camp practices and scrimmages made national headlines).

The most inspiring portion of Wilson’s Saturday showing was perhaps his ability to respond to adversity and pressure. With the Jets’ defense going through a tough outing and his pockets collapsing, Wilson held his own and didn’t fall victim to any sacks. His first touchdown pass to Kroft came shortly after a Jets penalty bestowed the offense a dozen-yard second down. Such command of the offense impressed Jets head coach Robert Saleh.

“I thought Zach had good command, he was under control, he handled the pressure well, he was good in and out of the huddle,” Saleh said, per team reporter Randy Lange. “He’s been going through his progressions and he’s been pretty good at that.”

The Jets will round out their preseason slate against the Philadelphia Eagles on Friday night at MetLife Stadium (7:30 p.m. ET, WCBS).Â