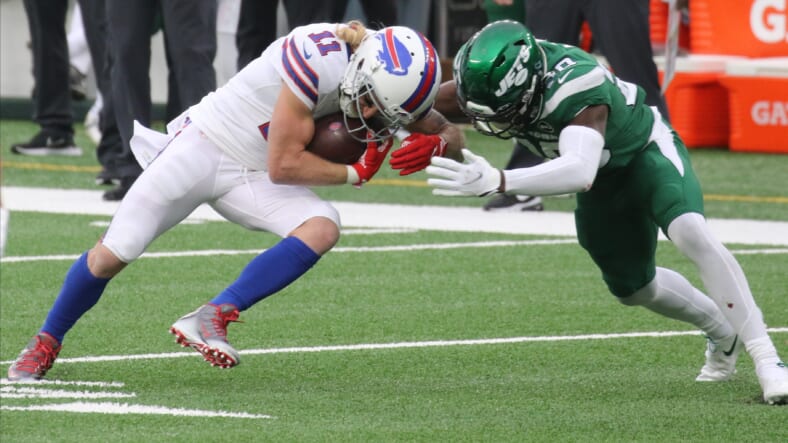 The New York Jets franchise-tagged the safety Maye earlier this week, which will net him $10.6 million for a one-year deal.

Marcus Maye received a bit of an earlier birthday gift on Monday, as the New York Jets placed the franchise on the fifth-year safety and 2017 draftee. The Jets and Maye have until July 15 to come to terms on a long-term deal.

Maye is the first Jets representative to receive the designation since Muhammad Wilkerson in 2016. The Jets and Wilkerson wound up reaching a long-term deal and general manager Joe Douglas hopes a similar agreement can be worked out with Maye.

“Marcus is a valuable member of this organization,” Douglas said in a report from team writers Eric Allen and Ethan Greenberg. “Someone that started his career here, someone that’s been a pro’s pro. He’s smart, reliable, and has provided outstanding leadership. Our plan hasn’t changed. We’re in the process of working to have Marcus be here long term.”

With this transaction, Maye, the newly minted 28-year-old, becomes the Jets’ unofficial first acquisition of the 2021 offseason, bringing back a familiar face in what’s sure to be an offseason of change. ESM has three reasons why the Jets got it right…

We at ESM strongly advise against playing the “Drink every time a New York media outlet references the New York Jets’ excessive 2021 cap space” game. Already peaking at over $70 million as the offseason got underway, that number enjoyed a sizable boost last week upon the release of three-year defensive lineman Henry Anderson. The Jets netted back $8.2 million upon Anderson’s release.

Essentially, the Jets traded in Anderson, who failed to live up to the $25 million contract extension he earned in 2019, for a year of experimentation with Maye, who posted career-best numbers and took home the team MVP award named after Curtis Martin last season. Time will tell how Maye’s on-field future pans out in New York, but Douglas’ financial maneuvering is already paying off.

EAST RUTHERFORD, NEW JERSEY – OCTOBER 13: Safety Marcus Maye #20 of the New York Jets celebrates a stop against the Dallas Cowboys in the first half at MetLife Stadium on October 13, 2019 in East Rutherford, New Jersey. (Photo by Al Pereira/Getty Images)

Maye has been a rare silver lining of consistency over the past few seasons for the Jets, but silver linings can only slightly polish a 2-14 record. Sure, he can beautify the Adam Gase era as best as he can, but can he be a contributor for a contender? There will be no better time to figure it out than 2021, as the Jets have opted to leave their future in the hands of a respectable, accomplished defensive name in Robert Saleh.

The former San Francisco defensive boss has been at the Jets’ helm for less than two months, but it sounds like he has some big plans for the Florida alum.

“I know Joe holds him in very high regard,” Saleh said after his opening press conference, per notes from the Jets. “I know heâ€™s got a tremendous reputation in the locker room and so being able to get on the tape and just study him and see how he fits and where. From my understanding, heâ€™s a very, very, very talented young man. And within our scheme, safeties are, obviously, theyâ€™re important to everybody, but with how we do things, it sounds like heâ€™d be a very versatile piece.”

Maye had his best season as a pro, and the analytics (fourth-best graded safety on Pro Football Focus) indicate he’s on the rise. But how is he going to fit into a new system? The Jets have just bestowed an affordable audition to see if he’s a fit for the future.

The Jets had enough chaos centered on a talented safety to last them for the rest of the decade…and parts of the next…with the Jamal Adams unpleasantness last season. That process threatened to repeat itself when Maye’s agent Erik Burkhardt brought it up earlier this month, threatening to fracture negotiations between the team and player before they ever truly got rolling.

But a franchise tag takes care of two issues surrounding Maye’s continuing New York career: the Jets can see how he performs in Saleh’s system before committing to the long-term while making it clear that they do appreciate his services and hope to keep him the potential glory days ahead. Additionally, Maye gets a sizable deal, as he is now amongst the 12 highest-paid safeties in football, joining the brotherhood alongside fellow franchise tag holder Marcus Williams in New Orleans.

One would think that there’s little value in bringing back any remnant of the Adam Gase era or even any part of a cursed 2017 draft class that also included Adams and the fact they chose ArDarius Stewart in the third round shortly before Chris Godwin, Kenny Golliday, and Jonnu Smith. But Maye is coming off a career-best season and did his part to at least keep the Jets in the SportsCenter Top 10. His veteran leadership could prove vital, as the Jets plan to showcase a lot of youth in their secondary (Bless Austin, Ashtyn Davis, Bryce Hall) with the post-Adam era officially underway.

â€œHeâ€™s one of those guys that works hard and doesnâ€™t talk much, but he will speak up if he feels like he has to,â€™â€™ former Jets teammate and New York Giants franchise tag honoree Leonard Williams told Mark Cannizzaro of the New York Post in December. â€œI think itâ€™s even more powerful sometimes when you hear something from a guy that doesnâ€™t talk much. You know he means it.â€™â€™

An offseason of change likely awaits the New York Jets. But this retainer from some of the Jets’ darkest, even if it’s only temporary, could well pay off as the Jets embark on a new era.