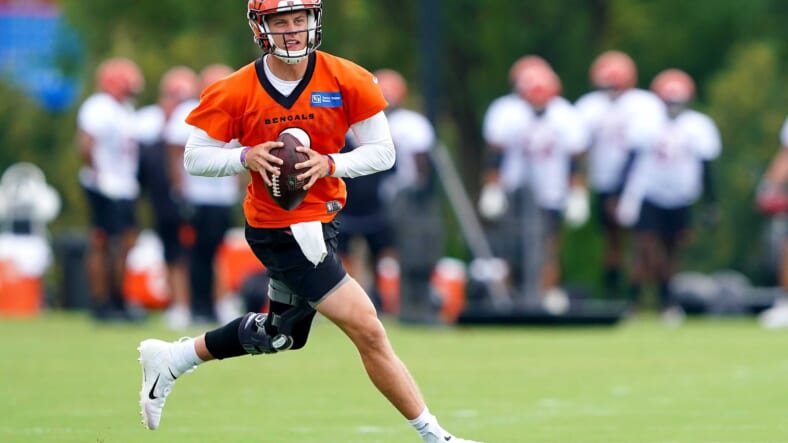 MetLife Stadium’s Sunday showdown features two downtrodden franchises, but one paces the AFC. What can the New York Jets learn?

Going through the respective histories of the New York Jets and Cincinnati Bengals is an exercise in futility and annoyance.

Nothing more needs to be written about the Jets’ 50-plus year championship drought, one only complemented by the longest active playoff drought in the NFL, a record they’re in absolutely no danger of losing at 10 years and counting. Cincinnati, meanwhile, is close behind (along with Denver and undefeated Arizona) at five years. but it’s been a full-on three decades since the Bengals have won a mere playoff game. The team is also the only member of the former American Football League that hasn’t captured a championship in the AFL or the merged NFL. Cincinnati’s relatively small-town settings away from the New York spotlight have perhaps helped them avoid the jokes and memes often sent the Jets way in reference to their lack of gridiron accolades.

Yet, as the star-crossed franchises prepare for a Halloween showdown at MetLife Stadium on Sunday (1 p.m. ET, CBS), the Bengals are the toast of the AFC. If the season ended today, the Bengals (5-2) would be the owners of the sole postseason bye on the conference bracket. Energized by the collegiate champion duo of Joe Burrow and Ja’Marr Chase, Cincinnati made a big statement through a one-sided victory in Baltimore last weekend. Their two losses, one of which was an overtime loss to the mighty Green Bay Packers, have come by a combined six points.

It’s not like there was any advance warning from Bengals: they won 13 games over the past three seasons and there was significant concern about their young superstars. Burrow was coming off a devastating knee injury sustained 10 games into his rookie season while the arrival of Chase carried the red flags of drops and not being an offensive lineman who could protect the young quarterback. As the second half of the season nears, the Bengals will likely be among the most popular choices among those in charge of flexible scheduling.

Conventional football wisdom suggests that the Bengals are prime prey for a trap game against the reeling Jets (1-5), but even the most optimistic Jets fan…that poor, poor soul… is dreading the Halloween nightmare that lies ahead.

The Jets are fresh off a 41-point defeat at the hands of the mediocre New England Patriots. New York won’t even have the services of its young franchise quarterback to work with, as a strained PCL will keep Zach Wilson out for at least the next two weeks. Gang Green will go into the aerial battle with Mike White, who will make his first NFL start while Joe Flacco prepares for his New York rearrival.

If anything, the Jets can take several lessons from a brother in futility…

One of the Bengals’ veteran breakout stars has been tight end C.J. Uzomah. The seventh-year pro already turned himself into a popular, eternal Cincinnati trivia answer last season when he caught Burrow’s first touchdown pass before a torn Achilles ended his season prematurely. Uzomah’s receptions have been some of Cincinnati’s biggest energizers: of his 17 receptions, 10 have gone for either first downs or touchdowns. He was appropriately one of the biggest stars of the Bengals’ win over the Ravens on National Tight Ends Day, earning 91 yards on three receptions, two of which were good for long touchdowns.

Burrow believed he had something strong brewing with Uzomah in limited collaboration last year.

“I think he was our top target through two weeks last year…unfortunately, (he) went down with a knee injury early but we really clicked from the beginning with each other,” Burrow said, per Kelsey Conway of Cincinnati.com. Head coach Zac Taylor added in the same report that Uzomah has “found his spot”.

â€œJoe has a lot of confidence in him,” Taylor said. “He always makes plays when his number is called.â€

The Jets are cursed with a laundry list of issues, so much so to the point where their tight end woes have almost been forgotten about. Their necessary removal of Chris Herndon netted them a fourth-round pick but Tyler Kroft, Ryan Griffin, and Trevon Wesco (a combined 110 yards through six games) have done little to pick up the slack. Tight end should undoubtedly be high on the Jets’ offseason to-do list, whether such help comes from free agency (a list that, in fact, includes Uzomah) or the draft (SEC standouts Jalen Wydermyer and Cameron Latu are among the options).

Find and establish a defensive identity

The Jets’ defense was one of the few silver linings about the first four games. What the unit was able to do with a hodgepodge of final camp cuts, day three draft selections, and rookie free agents was admirable, especially considering the awkward spots that offensive turnovers and struggles created for them. The pass rush (confirmed to be missing the services of former Bengal Carl Lawson for the whole season) was particularly impressive, earning 14 sacks through the first four games. That success was personified through a four-year extension via a four-year extension (featuring $30 million guaranteed) for John Franklin-Myers.

But consecutive no-shows have rendered the defense guilty in the ongoing struggles. They were able to salvage a poor first half performance against Atlanta in London with two turnovers but the brutality in Foxboro was all kinds of ugly: Sunday marked the eighth time in franchise history that the Jets allowed at least 550 yards a game and the first time since 1995’s season opener that they allowed at least 50 points in a game. The pass rush, which could’ve helped for the team’s identity for the future, has been non-existent over the past two games: they’ve earned one sack in that span, earned by Del’Shawn Phillips in New England when all was lost.

The struggles on defense have prevented the Jets from leaving the strong footprint in the trenches that Robert Saleh hoped would shape the team’s identity as they emerged from the post-London bye.

“I think we all stand in lockstep with Joe (Douglas), in terms of we’re going to be identified upfront,” Saleh said, per notes from the Jets. “Our D-line has been extremely effective. (It’s been) very, very good playing with a lot of energy, a lot of just overpowering teams, overpowering their opponent. I think (that identity is) starting to get established.”

Cincinnati, meanwhile, believes that they’ve succeeded in establishing their own defensive identity, one generated through physicality, resiliency, and football smarts.

“Thatâ€™s one thing that we know we are: Weâ€™re a tough team. We give everybody our best shot,” first-year Bengal Chidobe Awuzie said of the unit, per Kaelen Jones of The Ringer. â€œI think the most important thing is proving Â (we can compete with the top teams) to ourselves and…building an identity as a team, as a defense.”

“Everybody (has) their football smarts and intelligence,â€ safety Vonn Bell, in his second year with the team, added through notes with the team. â€œWeâ€™ve just been bonding, and itâ€™s just been gelling together. Weâ€™re playing together. Itâ€™s a great feeling.â€

Find a time and place to use weapons

A hidden subplot of Sunday’s game is the connection between Jets receiver Denzel Mims and Bengals linebacker Logan Wilson. The Jets had a chance to take Wilson in the late stages of the second round of 2020’s draft, but chose Mims with the 59th overall pick. Wilson, the Wyoming linebacker, went six picks later as the first pick of the third round. He has gone on to become one of Cincinnati’s defensive leaders while Mims has inexplicably struggled to gain snaps.

As owners of the top pick in each round of the 2020 draft, the Bengals took advantage: the selections of Burrow and Wilson sandwiched the choosing of Tee Higgins at the top of the second. Cincinnati’s staff, headed by the offensive minds of Taylor and coordinator Brian Callahan, has managed its assets well. Higgins has been a strong depth option alongside slot weapon Tyler Boyd. A strong rushing attack headed by Joe Mixon has been well complemented by spell option Samaje Perine.

Enough also can’t be said about the confidence bestowed in Chase, who has shot up the 2021 Rookie of the Year power rankings. It’s apparent there is a strong rapport between Chase and receivers coach/former All-American Troy Walters, one that has played to the Bengals’ benefit.

Walters, for example, never lost faith in Chase despite some early struggles and now believes that he has only scratched the surface of what he can accomplish at the professional level. The eight-year NFL veteran has noted that Chase has kept their chemistry and routines going despite reaching other-worldly levels of production.

“Nothing has changed. A lot of times when guys have success they stop doing what got them there. But he’s putting the time in all the days before Sunday. He’s got the routine down of how to be a pro,” Walters said of Chase, per team reporter Geoff Hobson. Referring to Chase’s 201-yard outing against the Ravens, it was apparent that Walters’ guidance helped him stay the course after he was frustrated by early Baltimore coverages.

“He wasn’t complaining or griping,” Walters said. “He understood his time was going to come. His average shows when he gets the ball in his hands, he can make some magic.”

Sunday’s game begins an 11-game stretch of uninterrupted football for the hapless Jets, one that will serve as de facto research and development for the future. If the Jets do anything over this final stretch, the coaching staff needs to find ways for young weapons like Mims and Elijah Moore to contribute on a more extensive basis. The team has, in fact, done a solid job of allowing rookie Michael Carter to establish his identity on the game’s rushing antics. It’s time