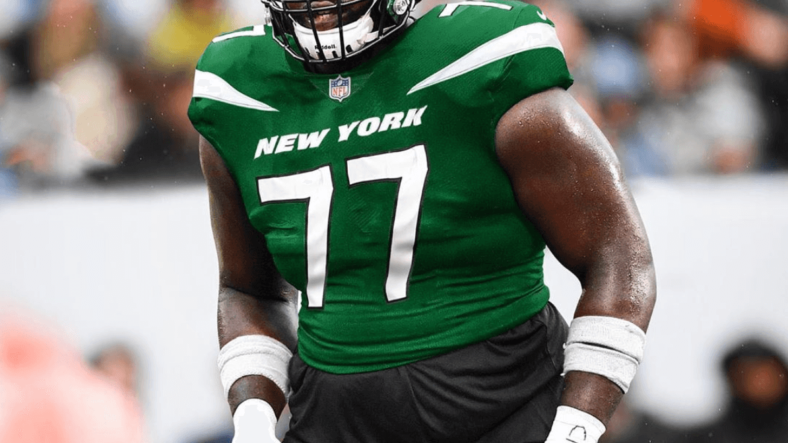 Amid all of the negatives surrounding the New York Jets this season, offensive tackle Mekhi Becton has been a positive. The rookie leads all AFC offensive tackles in Pro Bowl votes with 65,930 so far. That amount of votes is more than impressive, especially for a rookie, but how he got to this point is impressive as well.

Through the team’s 11 games, Becton has played in nine, starting eight. Additionally, he has been on the field for just 60% of the team’s offensive snaps. So, with playing just over half of the team’s snaps, leading the conference in Pro Bowl votes is astounding.

Offensive linemen are assessed, and voted for, based on a few statistical categories. These include penalties, sacks allowed, pass blocking and run blocking. Becton has been solid in reference to these, and every facet of his game, to say the least.

Those four penalties don’t rank him in the top-tier of offensive tackles in this category, but it’s impressive for a rookie.

He’ll have to continue to improve, as fellow rookie tackle Andrew Thomas has more snaps played, but fewer penalties, for the Giants. So, comparatively, penalties haven’t been his most impressive area. However, the small-enough amount of them is a welcomed sight.

As a team, the New York Jets have allowed 30 sacks thus far. Mekhi Becton has allowed 3 himself. That number isn’t fantastic, but it isn’t bad either.

Penalties and sacks allowed are advanced stats that analysts look at, but in terms of on-the-field play, Becton’s blocking has been great. In fact, over the last two games specifically, against the Chargers and Dolphins, he has been outstanding. This is what he’s done over those games:

One word can summarize those numbers: great. Those are the numbers that aren’t necessarily realized while watching games but help show how dominant he can actually be.

When it comes to run blocking, Becton is perhaps even better. During games, the announcers seem to always be saying the Jets should “run behind big number 77.” When they do, they tend to get a positive gain of some kind. Becton’s ability to get the primary block, release, and get to the second level shows, and is a welcomed sight.

Here are some of his best block of the season thus far:

Overall, Mekhi Becton has been a very good player for the Jets this season. The rookie may very well be the best player on the team and is on his way to representing the Jets on the Pro Bowl roster, even if the game is only happening virtually inÂ Madden 21.