Henry Anderson released; What it means for the New York Jets 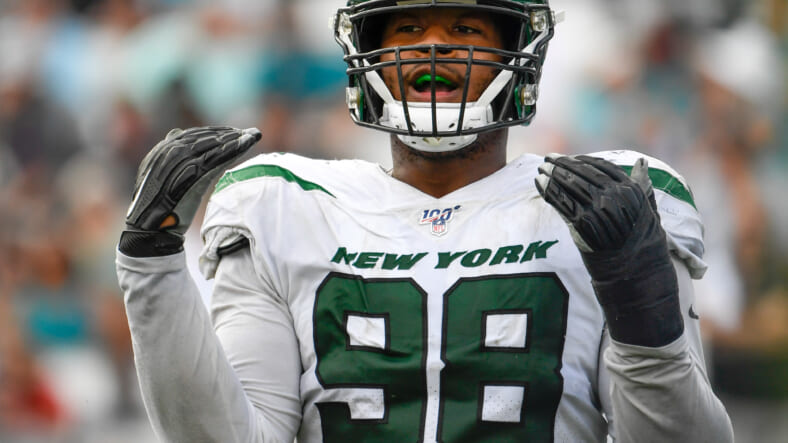 With the veteran Anderson out and over $8 million of cap space in, ESM ponders what’s next for the New York Jets.

The New York Jets bid Henry Anderson farewell on Tuesday night, releasing the three-year veteran. With the release, the Jets now save about $8 million in cap space, bring an already robust number to just under $76 million to spend this offseason…the second-best purse in the NFL, behind only Jacksonville.

How does this change the Jets moving forward? ESM investigates…

Kyle Phillips had an awesome rookie season against the run – 16 tackles for no gain or a loss, tied for 3rd-most among edge defenders.

This becomes a bigger year for Kyle Phillips

Phillips was turning into something that worked for the Jets over the past two seasons…so, of course, football misfortune befell him. This diamond in the rough emerged as an undrafted free agent out of Tennessee in 2019, and he went on to make the most of the time afforded to him. Playing 50 percent of defensive snaps, Phillips became a menacing prescience in opposing backfield, earning 39 tackles (7 for a loss, including 1.5 sacks, led the team) over 15 games (4 starts). The Jets’ defensive staff had high hopes for him entering the 2020 season.

“Being an undrafted free agent, he’s just a guy who’s so mature for his age. He’s one of those players you hope can play 10 years,” then-defensive line coach Andre Carter, now holding the same position at LSU, said of Phillips to team reporter Jack Bell. “He just works hard. He’s old school. He can play in various packages. He’s smart. He’s the least of my worries. He’s one of those players you enjoy having in the room because he asks intelligent questions.”

Alas for Phillips, he was never able to make an impact in 2020 due to lineup shuffling and an ankle injury that prematurely ended his season. But as the immediate name behind Anderson on the depth chart, this season takes on greater importance, as the transaction shows the Jets have extended a new brand of trust unto him. His development under Robert Saleh and his 4-3 tendencies will certainly be something to keep an eye on once the team reconvenes.

There are more funds to work with

The Jets’ cap situation has been discussed and sung about ad nauseam in the metropolitan postings, but the question becomes how they can wisely spend and distribute that money. New York is far removed from the proverbial “one move away” from the Super Bowl…heck, they might be several moves away from merely sniffing a wild card spot at this point. But the release of Anderson will allow them to address perhaps some under-the-radar needs they would be unable to obtain without the $8.2 million afforded to them through this transaction.

For example, the Jets could be well settled in their tight end spot, hoping that Chris Herndon has regained his rookie year form. This extra cap room, though, could perhaps give them the means to seek out some veteran help. Same with the running back spot, where they have plans for La’Michael Perine but are stretched thin with Le’Veon Bell gone and both Ty Johnson and Josh Adams up to hit the market. Now armed with nearly $75 million in cap space, they might also be able to afford multiple marquee free agents.

With the potential to add more weapons, it is in fact possible that the possibility of Sam Darnold staying has been raised ever so slightly.

The purge has begun

Obviously, there are exceptions, but the purge of almost anything relating to the Adam Gase era is officially underway with the release of Anderson. It informally began with the in-season release/trades of Le’Veon Bell, Steve McLendon, and Avery Williamson, but now a new cutdown to add even further to the salary cap surplus.

While Anderson’s time in New York was probably up…he earned only a single sack after the career-best 7.5 in 2018…the Jets might be tempted to dismiss some rare, reliable silver linings in an attempt to fatten their wallet even further. The team has a major decision to make on Jamison Crowder, who has been by far their most consistent offensive weapon over the last two seasons. But with a $10 million addition to their cap space picture due upon his release, he could be the next to go (though they could gain back the same amount in a trade). Others potentially on their way out include blockers George Fant ($7.8 million) and Alex Lewis ($5 million). The Jets’ cap picture is very healthy, but when one is cursed with as many issues as they are, every little bit helps. The mandated departure of Anderson is just the beginning.