Fun Facts and Analysis of the New York Jets’ 2020 Schedule 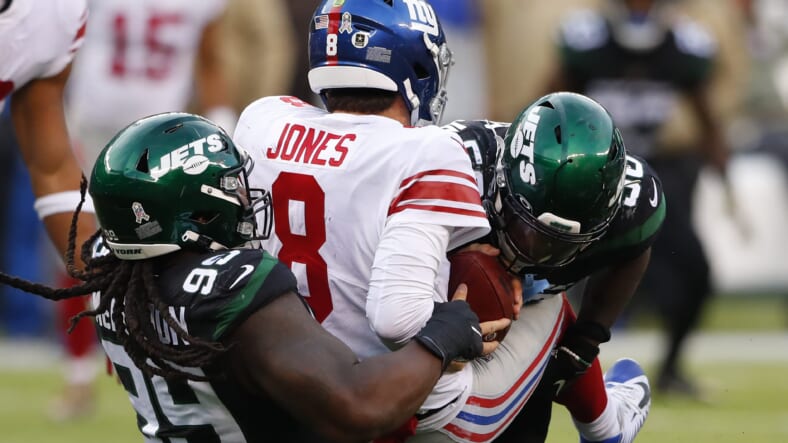 Times and dates have been attached to the New York Jets’ 20 preseason and regular season matchups. ESM reveals what you need to know.

As if you didn’t need more of a reason to stay inside, the NFL just gave you 256 goals to work toward.

The league attached times and dates to its 2020 regular season matchups on Thursday, while preaching caution in the wake of the current health crisis. Nonetheless, the event gave fans a welcome reprieve as they continue to work their way through these trying times.

Here’s what you need to know about the Jets’ slate…

The annual Snoopy Bowl stays in the Week 1 slot it found itself in last season, even though the Jets and Giants will not play each other during the regular season. Big Blue took last season’s matchup by a 31-22 final.

The Jets will play a nationally televised preseason game for the second time in three years, the last matchup being a 2018 visit to Washington, which was also on ESPN.

Pittsburgh will return to the site where their playoff hopes more or less died, as a Marcus Maye deflection game the Jets a 16-10 win.

Should it happen, 2020 will mark the 20th anniversary of the Jets and Eagles meeting annually in the preseason. The Jets took last year’s meeting at MetLife by a 6-0 tally

For the third time in four seasons, the Jets will open their regular season against the Bills. Buffalo has taken each of the first two openers in that span thus far, but Sam Darnold has yet to lose at New Era Field, having bested fellow 2019 first-round pick Josh Allen twice thus far. The Jets have dropped their Week 1 matchup in three of the last four seasons, the lone exception being 2018’s Monday night visit to Detroit.

The Jets’ will welcome the defending NFC champions for their first East Rutherford visit for AFC business since the 49ers administered a 34-0 shellacking in 2012 en route to that season’s Super Bowl. New York’s last home opener win came in 2017 against Miami, but they have likewise gone 1-3 over their past four tries in such a game.

The Jets are 3-1 at Lucas Oil Stadium since it opened in 2008. Alas, the lone exception is the 2010 AFC Championship Game. New York’s previous visit was a 20-7 Monday night triumph in 2015. Overall, the Jets have taken four of the past five meetings with their former AFC East brethren since that postseason match.

A previous Thursday night meeting with the Broncos didn’t go so well, as Tim Tebow’s 20-yard touchdown run gave Denver a 17-13 win at Mile High. Their 34-16 win over Denver ended a three-game losing streak in the series. The Jets are 2-5 on Thursday night games since the NFL made them a full-time phenomenon in 2012.

No matter what happens between the Jets and Cardinals, the quarterback matchup between Sam Darnold and Kyler Murray will definitely be more exciting than the last time they met at MetLife Stadium. Back in 2012, Greg McElroy relieved Mark Sanchez and guided the Jets to an ugly 7-6 victory. The Jets have won six of the last seven meetings, but fell in the last showdown in Glendale in 2016.

Depending on health progress, the Jets are set to make their first two trips to SoFi Stadium, the site of Super Bowl LV this season. The Jets’ last game against a team with a Los Angeles moniker came back in 1993, when they fell to the Raiders at the Coliseum. More recently, the Jets dropped a 14-7 decision to the Chargers in their last meeting at home on Christmas Eve 2017.

The Jets will be looking to end a two-year losing streak at MetLife Stadium to the Bills, who are 4-2 at the relatively new establishment in East Rutherford after dropping their first four. This will mark the first time the Jets end their yearly pair with the Bills by the end of October since 2007, a Buffalo sweep.

Kansas City ended their five-decade plus Super Bowl drought. Are the Jets next? Time will only tell, but the first two AFL champions will meet at Arrowhead Stadium for the first time since 2016. The Jets’ last Kansas City masterpiece came in 1998, when John Hall’s 32-yard field goal as time expired gave them a 20-17 victory.

After two appearances last season, the Jets get one showing onÂ Monday Night Football, thought the MetLife meeting with the Patriots gets such a treatment for the second straight season. The Jets will look to end an eight-game losing streak in the rivalry and also seek their first Monday night win since the aforementioned Week 1 tilt against the Lions in 2018.

With the expanded AFC playoff picture, could these matchups with Miami hold major implications? The schedulemaker certainly seems to think so, as this is the first time a Jets-Dolphins game starts beyond the 1:00 p.m. ET timeslot since December 2016, when a Miami squad led by Adam Gase beat the Jets 34-13 in a Saturday primetime game.

The Jets’ bye week comes in Week 11 for the second time in the last three seasons.

In this de facto home-and-home series with the Dolphins, the Jets will look to win after their bye for the first time since 2015, when they followed up a London win over Miami with another triumph against Washington. The Jets’ last-second win Miami last December, courtesy of a Sam Ficken field goal, ended a four-game losing streak against the Dolphins.

The Jets finished their stretch against the Oakland Raiders with a 9-11 mark, but they were able to end things on a dominant note with a 34-3 win at MetLife Stadium last season. Las Vegas’ new franchise has not won in East Rutherford since 1996 and is 0-3 at MetLife Stadium.

The Jets haven’t beaten the Seahawks since 2004, and their last win in Seattle came at the since-demolished Kingdom in 1997. Their prior matchup a 27-17 defeat at MetLife Stadium.

Over the last two weeks of the season, a dozen matchups have been nominated to potentially appear in a trio of Saturday games. The Jets’ penultimate two games are a pair of such choices, including the latter half of their SoFi split.

Thus far, Baker Mayfield has gotten the better of Sam Darnold in the two meetings between 2018’s first two quarterbacks. Darnold, however, was unable to take part in last year’s Monday nite tilt, as his illness forced Trevor Siemian and later Luke Falk to oversee a 23-3 defeat in East Rutherford.

The Jets are still looking for their first win at Gillette Stadium since their epic divisional playoff wince in 2011, but they were at least able to snap the touchdown hex in their last visit. New England and New York last ended their regular seasons against each other in 2018, a game that served as the end of the Todd Bowles era.